Over 3,000 signed petitions were delivered to Governor Wolf urging him to swiftly approve the Atlantic Sunrise expansion project.

Williams Partners’ announced, in a press release, they have delivered over 3,000 signed petitions to Governor Wolf from Pennsylvanians wanting a swift approval on the Atlantic Sunrise project. The project will provide Pennsylvania with affordable natural gas and create numerous family supporting jobs. 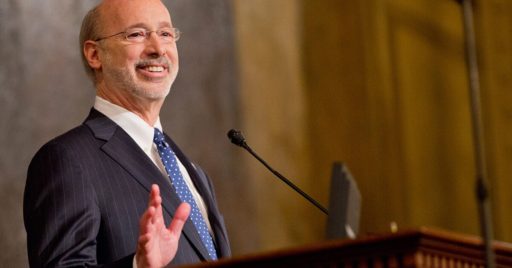 The Atlantic Sunrise will deliver Marcellus Shale gas to markets to the Mid-Atlantic and Southeastern U.S. and is expected to increase deliveries enough to provide service to seven million homes.

The economic impact for Pennsylvania with increased tax revenue and economic growth will be felt for many generations to come.

TUNKHANNOCK, Pa.–(BUSINESS WIRE)–Citizens, community, labor and business leaders from across Pennsylvania are expressing support for Williams Partners’ (NYSE: WPZ) Atlantic Sunrise expansion – a nearly $3 billion energy infrastructure investment in the continued growth and development of the state’s economy and thousands of jobs for workers.

“Williams’ Atlantic Sunrise project addresses this critical need, allowing us to capitalize on this once-in-a-generation opportunity,” said Pennsylvania Chamber of Business & Industry President Gene Barr. “While the components are there for sustainable economic growth and prosperity, the lack of energy infrastructure to move this clean-burning, low-cost commodity to markets hinders immediate job growth and economic opportunity in our state. The time to build this project is now.”

After receiving a Certificate of Public Convenience and Necessity from the Federal Energy Regulatory Commission (FERC) in February 2017, Atlantic Sunrise can begin delivering benefits to Pennsylvania once the last remaining state permits necessary to begin construction are secured. Construction on the Central Penn Line (the greenfield portion of the project) is targeted to begin in the 3rd Quarter of 2017, which would allow the full project capacity to be placed into service in mid-2018.

“Pennsylvania is poised, perhaps unlike at any other time in recent memory, to benefit in every way — new jobs, better wages, reduced energy costs, increased tax revenue and economic prosperity for generations to come,” said Pennsylvania Chemical Industry Council President Jeff Logan. “After nearly three years of intense regulatory scrutiny, it is time for our own state government to complete its review of this important infrastructure project so that Pennsylvanians can immediately benefit from the economic growth and jobs it promises to deliver. This includes the chemical industry which supports more than 90,000 direct and related jobs in the Commonwealth.”

In 2015 Pennsylvania State University researchers forecast the Atlantic Sunrise project to directly and indirectly support approximately 8,000 jobs in the 10 Pennsylvania counties during the project’s construction phase, resulting in an estimated $1.6 billion economic impact in the project area.

“Growth in the energy industry can create steady, reliable careers for millions of men and women in our country and in this state,” said Dave Horn, LECET Representative, Mid-Atlantic LIUNA. “More specifically, pipeline work is a life line for good union jobs with family-supporting pay resulting in millions of dollars being reinvested back into the community and local businesses. We work on these projects; we have seen first-hand the economic benefits.”

Recently, a petition signed by more than 3,000 supporters was delivered to Pennsylvania Governor Tom Wolf requesting swift state regulatory approval of the project. In addition, more than 1,200 people and organizations submitted supportive comments to FERC during the public comment period.

The full press-release can be read on Williams’s site.