Yesterday, state Rep. Danielle Friel Otten took to Twitter to compare hardworking pipeline construction employees who are building a lawfully permitted project to “Nazis.”  Her tweet is offered below, along with the screen shot.

Here are the first two in a series of 14 tweets and pictures from the Pennsylvania Alliance for Energy (@PAllies4Energy) to which Rep. Danielle Friel Otten ‏(@Danielle_4PA) responded: 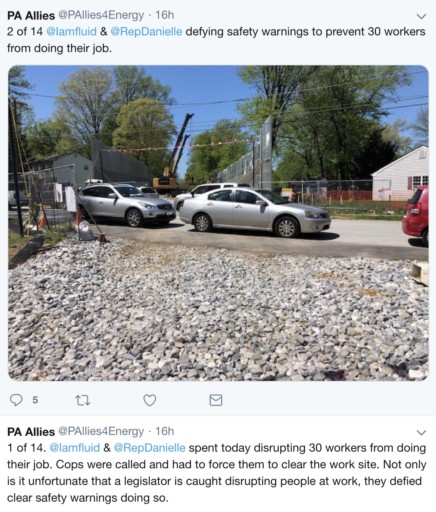 And, here is how Rep. Danielle Friel Otten responded: 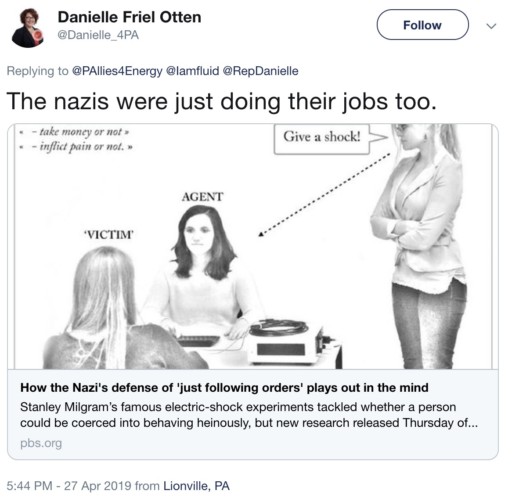 There are many ways to protest a pipeline — even pipelines that have been lawfully permitted — but to liken hardworking construction workers to ‘Nazis’ reaches the deepest depths of indecency. Rep. Friel Otten’s tasteless tweet is not only unbecoming of the office she holds and an insult to the men and women who work hard to bring energy to homes across the state, it wholly minimizes the horrors and suffering that the Nazis executed upon millions of people.  Her characterization is unfair, unfounded, and unconscionable.

Editor’s Note: The Pennsylvania Alliance for Energy is a coalition of consumers, industry and organized labor. Its tweet was intended to call attention to the fact a State Representative by the name of Danielle Friel Otten was engaged in trying to stop pipeline workers from doing their jobs, ignoring safety warning in the process. Her response was to engage in a vile insult to all laborers and decent people who simply want to feed their families while helping to supply the energy and resources this country needs.

It’s clear where Danielle Friel Otten’s priorities are and they’re far from the needs of ordinary Americans. No, she’s decided appeasing the wealthy Food & Water Watch gang and NIMBYs is far more important. And, there are no bounds to what she’ll do or say to advance their interests over those of the common man and woman.