New York DEC, for the third time since Prince Corruptocrat was re-elected, has been hit with major legal challenges over its unconscionable pipeline delays.

The Federal Energy Regulatory Commission (FERC), on February 3, approved a long-delayed project — National Fuel Gas Company’s (NFG) Northern Access 2016 pipeline project. The $455 million project includes building 97 miles of new pipeline along a power line corridor from northwestern Pennsylvania up to Erie County, New York. The project also calls for 3 miles of new pipeline further up, in Niagara County, along with a new compressor station in the Town of Pendleton. Although FERC has now given permission to build it, the State of New York, specifically the state’s Department of Environmental Conservation (DEC), must issue stream crossing permits. Sound familiar? Well, it should. 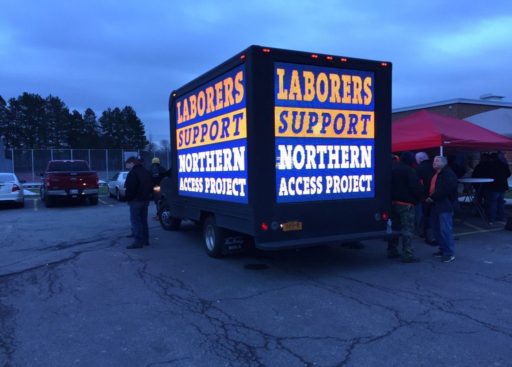 The DEC faced a similar task with the FERC-approved Constitution Pipeline and ultimately, under political pressure from Gov. Andrew Cuomo, made the decision to refuse granting Williams the permits it needs to build the Constitution. Williams sued and sometime this spring New York DEC will almost certainly lose the case. With the approval arriving, the DEC decided maybe it was time to begin conducting circus public hearings about the project.

But, NFG is in no mood to screw around with the Cuomo DEC, so they’ve asked FERC for a “reconsideration and clarification” on the role of the New York DEC in reviewing the project. Specifically, NFG wants FERC to rule that the DEC has no role in reviewing the Northern Access 2016 project. Wouldn’t that be sweet?


Here’s the latest on the Northern Access 2016 project from the NGI Daily Gas Price Index:

In a request for reconsideration and clarification or, in the alternative, rehearing, the companies state that the Federal Energy Regulatory Commission’s order “erred” by not finding that NYSDEC stream crossing, water withdrawal and wetlands permits, among other requirements, are preempted by the Natural Gas Act and not required to begin construction. They also argue that the state waived its requirement for the project to obtain a water quality certification when it failed to issue one by Oct. 25, 2016 — at the end of the federal authorization period under the scheduled environmental review.

The companies added that FERC’s order was confusing because it authorized the NYSDEC to review and approve two compressor units. The companies said that by failing to clarify the necessity of state air emissions permits, the Commission suggested that New York has a role to play in permitting natural gas pipelines. Moreover, National Fuel and Empire said the Commission should clarify that state agency approval or authorization of an invasive plant species management plan is also preempted, adding that NYSDEC has yet to approve a plan they submitted last August. 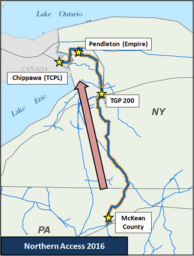 Editor’s Note: Jim Willis has eyes in the back of his head for finding this stuff. This is is the kind of news that easily gets lost in all the mayhem of the shale revolution but it’s incredibly important. Why? Because this is not the second time New York DEC is being challenged on its unconscionable pipeline delays of recent, but the third. The other one is the delay in the approval of the Millennial Pipeline extension (only seven miles) to serve the CPV Valley Energy Center plant nearing completion in Orange County, New York.

It’s now well beyond blatant what the New York DEC is doing under the thumb of Prince Corruptocrat who still entertains Presidential aspirations. He does so on the strength of his popularity in a state dominated by Manhattanite voters who view everything north and west of Peekskill as a wilderness occupied by uneducated stump-jumpers. The gentry class special interests have him under their thumb the same way he has the New York DEC under his. They have insisted, and he has complied, in ordering DEC to approve nothing and to delay every pipeline project; Constitution, Millennium, Northern Access, et al. It’s all part of building environmental extremist street cred.

Importantly, though, for the rest of us not trapped behind the walls of the Emperor State, Cuomo is teaching the midstream industry how to fight. Three times now in short order it has taken the Prince to the dock to remind him even kings and princes are subject to laws and consequences. The Constitution folks did so reluctantly after giving the Prince three years of wasted good faith. The Millennium team waited only to the end of the one-year FERC allows the state’s to act. The NFG Northern Access lawyers are challenging the Prince’s very authority and saying it shouldn’t even have a full year to act. Good for them! This is how one fights a wicked pol. NFG’s filing with FERC (found here) is both lengthy and well-reasoned.

New York DEC has been blithely ignoring FERC regulations by pretending it still has authority to require all sorts of state permits for pipelines regulated by FERC. It does not, although companies have, heretofore, been working with the state in a cooperative manner. DEC has also taken the position it can willy-nilly extend forever the up-to-one year provided under the Natural Gas Act (NGA) for it to certify compliance with Federal water quality rules administered by it. Indeed, it doesn’t automatically get a full year — only what’s needed and provided under the FERC schedule. Here’s what NFG asserts in its filing (emphasis added):

(a)  State law permits, including New York State Department of Environmental Conservation (“NYSDEC”) Article 15 and Article 24 Permits, State Facility Permits, and Minor Facility Registration Statements, as well as state agency approvals, authorizations and requirements, are preempted by the NGA and the Order, and thus are not required to commence construction of the Project; and

(b)  NYSDEC’s failure to issue a decision on Applicants’ Section 401 Water Quality Certification (“WQC”) application by October 25, 2016, the end of the federal authorization period set forth in the Commission’s Notice of Schedule for Environmental Review for the Project, resulted in a waiver of any requirement that Applicants obtain such a WQC with respect to Project facilities in the State of New York.

The explanation for both positions, that New York DEC had no authority to require state permits and was obligated to issue a decision on the Water Quality Certification according to the FERC schedule is very cogent. This is the other velvet lining to New York DEC’s bad behavior; it’s providing an opportunity for FERC to whack the agency (and Prince Corruptocrat) hard for repeated abuses of authority. Let’s hope it does.