New York DEC has filed a challenge to FERC’s approval of the Constitution Pipeline. It has to read to be believed as the agency simply denies every reality.

It was inevitable New York DEC would contest FERC’s approval of the Constitution Pipeline. Governor Corruptocrat tells the agency what to do, after all, and he wants a record of having opposed every pipeline to the very end,  What was not inevitable was how ridiculous the challenge would be. Who knows how the courts will ultimately dispose of the challenge but this request for a FERC rehearing is about as bad as it could be, as if it was crafted to be rejected. 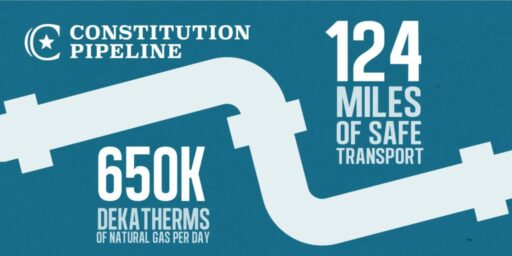 You don’t have to be an attorney to grasp the “doesn’t compute” nature of New York DEC’s request. Regular readers will recall FERC gave the Constitution Pipeline a go-ahead in August, following an earlier decision by the DC Circuit Court of Appeals in a case known as Hoopa Valley Tribe vs. FERC. That case involved a hydroelectric facility where similar Cuomo-type games had been played with the water quality certification process role carved out for states. Here is precisely what the court said in deciding it (emphasis added):

Whereas statutory waiver is mandated after a request has been pending for more than one year, the issue in this case is whether states waive Section 401 authority by deferring review and agreeing with a licensee to treat repeatedly withdrawn and resubmitted water quality certification requests as new requests. We conclude that the withdrawal-and-resubmission of water quality certification requests does not trigger new statutory periods of review.

That’s from the summary. Here’s more from the legal discussion:

There is no legal basis for recognition of an exception for an individual request made pursuant to a coordinated withdrawal-and-resubmission scheme, and we decline to recognize one that would so readily consume Congress’s generally applicable statutory limit.

Now, peruse the New York DEC request for rehearing again. You can stop on almost any page and find arguments such as this, which are repeated ad nauseam:

New York DEC, in other words, is trying to say the “coordinated withdrawal-and-resubmission scheme” it pursued in the case of the Constitution Pipeline was somehow different because the agency went through the motions of denying water quality certification in one such instance at least. Otherwise, it simply argues the application withdrawals acted as nullifications. This is silly, of course. A scheme to blackmail applicants into resubmitting is still a “coordinated withdrawal-and-resubmission scheme,” with or without a formal denial and, in the end, New York DEC only asks everyone to believe their particular scheme was something other than what it was.

FERC is unlikely to change its mind but who knows how the courts will eventually rule. Still, the DEC arguments essentially consist of denying reality; of saying a “coordinated withdrawal-and-resubmission scheme” is somehow not one. The whole argument, in fact, appears to be for show and show only. There’s nothing serious about it. This only confirms me in my view Cuomo couldn’t care less whether he wins or loses; he just wants the street cred with virtue signaling greenies for having opposed the pipeline.