LNG exports to Europe put an exclamation point on the UK’s lack of action to develop its own shale resources but create a market for Marcellus/Utica gas.

Editor’s Note: This is yet another of my friend Nick Grealy’s insightful posts from his No Hot Air blog; posts that bear directly upon our shale gas industry. He points out the huge shale gas resources under the UK and the inability of its creaky politically correct government to move ahead with development of those resources on anything approaching a fast pace. This lethargy is making a market for LNG exports from the US. It can only be good for the Marcellus and Utica Shale regions (not to mention shale regions in Texas and Louisiana), yet it is undeniable the UK is foolish to sit on its own shale resources. The western world would be one heck of a lot more secure as a whole if England moved ahead to ensure its own energy independence with shale gas and stopped sleeping. 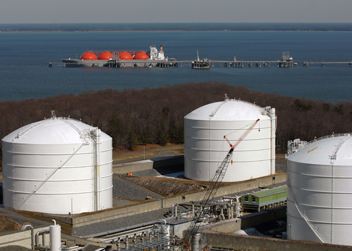 LNG is natural gas transported to an LNG terminal, frozen to −162 °C (−260 °F), then transported by ship and then reheated at the receiving terminal and injected into the gas grid.  The imminent arrival of LNG into Europe that is derived from US shale gas presents an opportunity for anti fracking opponents in Europe to chill out and start to ask themselves some honest questions.

We are going to be burning shale natural gas in Europe and the UK within weeks. The question is do we want to use our shale gas or pay for someone else’s?

In the UK, 36% of natural gas supplies the residential sector. Opponents concentrate on the electricity sector, but generation is only 25% of use. This is from a recent US EIA report on UK energy. It would be nice if our government informed the energy debate in simple terms without needing to research multiple (and often outdated) energy databases, but there we go. Sometimes it seems the UK government is its own worst enemy.

Another UK government own goal is how they stopped funding reports like this from Cambridge Energy. The Housing Energy Fact File dates from 2013, when funding stopped. That seems short sighted, especially since the news on home energy keeps on getting better when measured in actual energy used and the carbon footprint attached. For now, until some organization updates it, it 2013 is the best we have.

The lower energy use and lower carbon footprint highlights what could be called a “Paradox of Success”. Many green sectors in renewables, and even efficiency, too often depend on a catastrophic narrative where climate, energy, fuel prices and weather are all getting worse. Highlighting success could mean good news may remove the sense of urgency some use to lobby for continued, or higher, subsidies. This thinking explains much of the bad blood between natural gas and greens: Greens depended at one time on the perception that oil and gas would be running out and getting expensive.

Smart greens who actually run businesses in solar and wind realize that isn’t happening and are able to compete against gas even at lower prices. Dumb greens who work in think tanks too often repeat the same outdated story that gas somehow slows down renewables.The paradox of success thus becomes the fear of success – or to be exact, fear of having to get another job.

Back to gas in the UK. Gas in hot water first, my emphasis:

The UK’s use of energy to provide hot water in homes has fallen dramatically since 1970. This is a quiet success story. Modeling suggested there was a cut of one third in energy used for hot water, in spite of the increase of more than two-fifths in the number of households (see graph below).

Unsurprisingly, this led to a shrinkage in the proportion of household energy used for water heating – down from nearly 30% to just 18%.

This improvement is consistent with the reduced heat loss from stored hot water (through better lagging of tanks and pipes, and eliminating hot water tanks with combi boilers), and more efficient heating systems. Greater use of electric showers and dishwashers – which heat water separately using electricity – also reduces energy use recorded as ‘water heating’. However, even allowing for this there have still been significant savings from total energy use for hot water

The last four decades have seen significant changes in the fuels used to heat homes in the UK. Solid fuel, electricity and oil have been replaced by gas as the main fuel for heating in homes with central heating.

In 1970 more than a third of homes with central heating used solid fuel and about a tenth used some form of electric heating or oil, and only two-fifths used gas. In 2011, less than 1% used solid fuel, just 2% used electricity, while the proportion using oil had more than halved to 4%. By then, the proportion of households using gas for their central heating had risen to 91%.

The growth in gas central heating – and especially switching from open fireplaces to condensing gas boilers – made average heating systems much more efficient. Average boiler efficiency (in terms of heating energy output/delivered energy input) has increased from 49.39% to 82.5% since 1970.

The obvious conclusion however is that people use natural gas for heat by choice. On comfort, economy and carbon, gas heat is the clear winner. Ground and air source heat pumps don’t even make the charts, although it would be interesting to see some 2015 figures. But this from the Energy Saving Trust discussion on alternative heating is pretty clear:

What fuel will you be replacing? The system will pay for itself much more quickly if it’s replacing an electricity or coal heating system. Heat pumps may not be the best option for homes using mains gas.

So where do does the UK get gas from? The EIA again:

But the North Sea is fading fast. This was Sam Laidlaw of Centrica in 2014:

Laidlaw said: “In primary energy, the UK’s production of gas is falling rapidly. North Sea oil and gas output has fallen by 38 per cent over the last three years. By 2020 we will be reliant on imports to meet 70 per cent of the country’s gas needs. So when it comes to security of supply, there is a pressing need for solutions.”

According to the energy boss, whose company is spending £160m on shale gas in Britain, the country must look to diversify sources. Last year Centrica signed a 20-year deal with Cheniere to export Liquefied Natural Gas from Louisiana with the first cargo due to be shipped in September 2018. It has also taken a stake in the Bowland shale license in Lancashire.

The reality is that the first LNG cargoes will hit Europe within weeks.  Even since 2014 things have changed.  Australian and US LNG will result in a glut on gas markets for at least the next five years.  The investments in LNG export and import terminals are sunk costs, as are the tankers.  No one will like making pennies on the dollar instead of dollars as the business plans of 2010 showed, but any money is better than no money at all.  But LNG is a special case in that most empty re-gas capacity is in Europe.  Asian demand is flat. So that gas is going somewhere and that somewhere will be Europe in general and the two terminals in Milford Haven in Wales in particular.

As an aside, Norway’s North Sea isn’t too far beyond the UK’s.  The only headroom for Norwegian gas lies in the Barents Sea, almost in polar bear territory.  Do Greenpeace, who parade their mascot Paula the Polar Bear to anti fracking rallies, really prefer using gas from her backyard instead of from under our own?

As the Sustainable Gas Institute at Imperial College shows, LNG (and ultra long distance piped Russian gas into Europe)  is much worse in carbon terms than either North Sea or UK onshore.

So, there is no way of avoiding use gas in heat.  Gas we will use will be from either our shale at low CO2 transport cost and at least 30% UK tax, or high CO2 with zero tax.

This is what I told The Guardian last week:

Nick Grealy, an independent UK gas consultant, said that Ineos ethane import plans and existing liquefied natural gas (LNG) imports from other countries such as Qatar made no sense when there were known reserves under the ground in Britain.

“It is crazy to bring in this high carbon (due to shipping emissions) gas with no tax levied on it in Britain rather than producing our own shale. We are importing gas and exporting money,” he argued.

It’s even nuttier when the gas will come from the shale fields to Sabine Pass, or within two years directly from Pennsylvania to slightly closer (and thus lower CO2) Cove Point.