The climate movement has become utterly ridiculous; driven by corporatists and ideologues who refuse to acknowledge anything that doesn’t fit their template.

I’m sick to death of the climate movement, by which I refer not to the cause per se but, rather, those who advocate for it on ideological grounds. They’ve chosen to ignore the real progress made toward achieving their supposed goals, reject debate and antagonize everyone who might actually make a difference. They’ve become serious demagogues and just as unserious about the facts. They’ve not only lost all credibility, but have become utterly laughable.

I’m old enough now to have lived through several predictions of environmental doom. The purveyors of this “eve of destruction” theme come at us regularly, issue one forecast after another that is never realized and are seldom held to account. I’ve learned enough at this point to know they’ll always be with us.

No amount of facts, history or logic will change that; there’s just too much emotional investment and too many special interests involved. Human nature is human nature and it isn’t pretty. Nonetheless, the truth eventually outs as those who buy into the fear and the distortions invariably take things too far and illustrate the emperor has no clothes. That’s the tipping point and it looks like we’re about there.

A sure sign of this is the yellow jacket resistance to climate movement fuel taxes France just proposed. Ironically, it did so in the weeks leading up to the big elitist climate meeting in Poland that virtually no one took seriously, providing a sharp contrast between fantasy and reality.

The climate movement is built upon a foundation of fantasy and deliberate ignorance when it comes to reality, of course. The fantasy is a virtual font of failed predictions because it is based on models invariably adopting the worst case assumptions, which is the first indication there’s something more than science going on. There is also a whole lot of evidence to the contrary. Take, for example, this wonderful video by our friend and guest blogger, Greg Wrightstone, the author of Inconvenient Facts:

Greg’s book is filled with stuff like this and is one of several I’ve read on the subject. His is the most readable and the best illustrated. I highly recommend it. Subscribe to his YouTube channel, too. I just did.

Having said that, I don’t reject the possibility there is some human impact on climate change. I tend to hold to views of scientists such as Judith Curry who acknowledges there could well be, but doesn’t get hysterical about it, choosing, instead, to put things in the proper context. That means continued research, thoughtful discussion and a search for policies we can all agree upon.

Surely, one of those policies should be natural gas development. It is low cost, it involves much lower CO2 emissions than either coal or oil and it stimulates real economical development in the areas where it is produced and huge consumer savings in the areas where it is consumed. It has achieved more dramatic reductions in not only CO2 but all emissions, improving air quality dramatically. The U.S., simply because it has not stood in the way of fracking, has done more to reduce greenhouse gas emissions than anyone, in fact, as the following chart (assembled from EIA data) demonstrates: 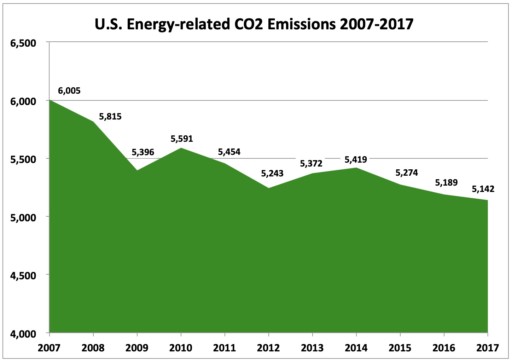 The data is incontrovertible; as natural gas production via fracking has soared, CO2 emissions have plummeted. Yet, the climate movement insists on ignoring it and exaggerating the threat of global warming. It is so thoroughly committed to the apocalyptic vision of a melting Earth that it insists on shutting down the speech of anyone who disagrees. It generates incredible amounts oh heat itself, in fact, putting out increasingly bizarre theories and predictions. Take, for instance, a story yesterday in the New York Times, entitled “Would Human Extinction Be A Tragedy?” Here’s the salient quote (emphasis added):

There are stirrings of discussion these days in philosophical circles about the prospect of human extinction. This should not be surprising, given the increasingly threatening predations of climate change. In reflecting on this question, I want to suggest an answer to a single question, one that hardly covers the whole philosophical territory but is an important aspect of it. Would human extinction be a tragedy?

This is the view of a professor of philosophy at Clemson University. Tuition and board at Clemson costs $50,516 per year, so don’t send your kids there. They’ll only learn to conform to a political correctness insisting not only that global warming is marauding threat but the Earth itself is worth more than the humans who inhabit it. Talk about self-hate! Todd May, the author of this claptrap, drivel that could only impress elitists worried about the masses threatening his own way of life, needs to get a grip.

Such is the nature of so much of the climate movement. It is impossible to take it seriously anymore. Enough with the endless spinning of doomsday scenarios based on little or nothing. Enough with the attempts to intimidate the speech of others and squelch it. Enough of the no-compromise, my way or no way, global warming politics. Enough of the corporatist schemes from the likes hedge funds types such as Nat Simons and Tom Steyer who but seek to add to their vast wealth and collections of houses by promoting green energy scams.

I’m sick to death of them. If they gave a damn about global warming, they’d be reasoning with us and admitting natural gas is part of the solution if one be needed. That they aren’t willing to do so tells me the climate movement isn’t about global warming at all. It’s about power, money and a substitute religion adopted by true believers. That and nothing more. Meanwhile, natural gas is reducing emissions across the board proving, yet again, that no good deed goes unpunished.

18 thoughts on “The Incredible Shrinking Credibility of the Climate Movement”