MDN first told you about IMG Midstream in August 2014. At the time, IMG was proposing to build seven “tiny” natural gas-fired electric plants–each plant producing on the order of 20-22 megawatts of electricity (enough to power 13,000 homes). IMG added a couple of more to their plans in November 2014. The beauty of IMG’s tiny natgas electric plants is that they are really small–about the size of a basketball court; they produce almost no air pollution; and they are quiet. It’s a really cool concept. 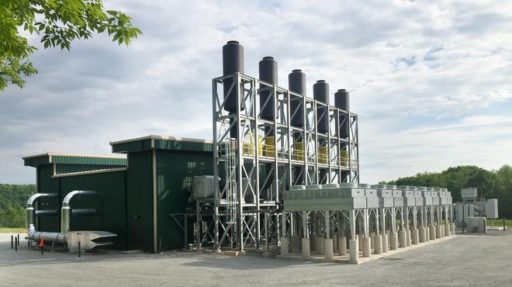 We spotted a recent article about IMG’s activities in southwestern PA and that got us to thinking. How are they doing with their plan to build 25 plants? So far, they’ve built 11 and are on the prowl for more locations. We have the latest update on IMG and their strategy of zigging (building small power plants) when everyone else is zagging (building large plants).
We spotted this in a recent Pittsburgh Business Times article:

It was the Marcellus Shale that initially drew IMG Midstream to southwestern Pennsylvania, but it’s the infrastructure that’s being built up around the shale that’s enabling the company to continue growing here.

IMG, a builder of small-scale, natural gas-fueled power plants that generate electricity, moved its corporate offices to the North Shore last year and today has two projects in the works in southwestern Pennsylvania: Amity in Amwell Township, Washington County, and Bayles in Greene Township, Greene County.

The company’s business model revolves around building $20 million, 20-megawatt distributed generation facilities — all with a similar design — near existing natural gas pipelines and electric substations where the electricity will flow into PJM Interconnection’s grid, which provides electricity for Washington, D.C., and 13 states including Pennsylvania.

“One of the founding principles of our business model was to be at the intersection of Marcellus gas and PJM grid territory,” said John Tingue, manager of development at IMG Midstream.

Historically, natural gas power plants were built as backups to coal plants, and used only for small areas or when demand was at its highest.

But, that’s changed dramatically over the past decade, as natural gas is rapidly replacing coal in this region as the fuel source of preference for electricity generating facilities. Many of the plants currently under construction are using natural gas, which is cleaner burning and cheaper than coal.

IMG Midstream is…on the lookout for a third location in southwestern Pennsylvania to build another plant. And if it gets enough plants in this region, it may also build an operations center here.

“We’d like to continue to build out a cluster of projects so we have economies of scale for the operations center and support that goes along with it,” Tingue said.

IMG’s two existing projects, Amity and Bayles, have most of their permits in place, and construction is expected to begin at Amity near the end of this year and by early 2018 for Bayles. Once construction begins, each plant will be online roughly nine months later.

IMG’s smaller plants will give it an opportunity to quickly provide electricity when PJM needs it, a far cry from the days when natural gas plants were primarily used to generate electricity to fill in only during peak times.

“We can certainly come on when dispatched by PJM within five minutes of a start time,” Tingue said. “We can respond to peak events if necessary, but the plants also run 60 to 70 percent of the time.”

We checked the IMG Midstream project page and found they now have 11 active projects. Some of them are built and operating, some are under construction, and some are still in the planning stage. Below is the information we could find about where each one is located (the IMG website only lists the project name). All of them, so far, are located in Pennsylvania

As we previously mentioned, IMG plans to build up to 25 of these tiny electric generating plants. The map below are the regions they are targeting (so far they’ve only committed or built in Northeast and Southwest):

This is how they describe their projects: