Germany is helping to build a LNG terminal to bring in Appalachian gas and correct for the failure of its Energiewende, which led to more coal and emissions.

The U.S. predominance in energy production is reshaping the world’s geopolitical situation, enabling the U.S. to strengthen economic ties with European countries. The combination of horizontal drilling and hydraulic fracturing has not just been good for American jobs and energy prices, it has become a major foreign policy tool that increases in utility as U.S. production grows.

One consequence of U.S. energy production is that Germany has decided to co-finance the construction of a €500 million ($576 million) liquefied natural gas (LNG) shipping terminal in northern Germany. Germany currently gets most of its natural gas by pipeline from Russia. Nord Stream 2, a German-Russian natural gas pipeline, has been proposed to double Russia’s existing gas export capacity to Germany. Russia accounts for over 50 percent of German natural gas imports, with the rest primarily coming from Norway and the Netherlands. The Trump Administration has been lobbying Germany to reduce its dependence on Russian natural gas and to buy U.S. LNG instead. LNG is about 20 percent more expensive than Russian natural gas, but European buyers are showing a willingness to pay a premium to reduce dependence on Russia.

The United States has been supplying LNG to Europe since 2016 and U.S. exports of LNG have skyrocketed since then. 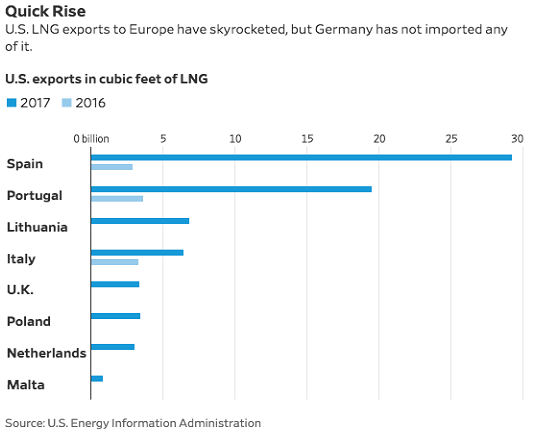 Plans to build an LNG terminal were previously stalled because of a lack of government support to make the project economical. On October 16, however, an international consortium filed its first official bid for state support for a terminal in the northern town of Stade, near Hamburg. The German government is fast-tracking the review of the application, planning to make a decision by the end of the year. According to LNG Stade, the facility would be fully operational by 2023 if the funding is granted by the end of the year. It is still unclear, however, how much support Germany will provide and in what form—cash subsidies, loans, credit guarantees, loss protection for investors, or a mixture of the four.

The Stade project is backed by Macquarie Ltd, an Australian financial group; China Harbour Engineering Company Ltd, a Chinese dredging firm; and Dow DuPont Inc. of the United States. The terminal would be based in the 1,400-acre Dow chemical plant on the bank of the Elbe River. The plant’s connection to Germany’s natural gas grid offers synergies that would make building an LNG terminal there about €100 million ($114 million) cheaper than other proposed sites.

The terminal could supply LNG to the port of Hamburg to refuel new ocean liners, some of which are beginning to use natural gas as a consequence of an upcoming agreement affecting maritime emissions that takes effect in 2020. AidaNova is a new luxury cruise ship owned by Carnival Corp. & PLC that will be the first to be powered by LNG, which is in line with the new environmental regulations.

Two competing consortia are expected to file applications for government backing to build an LNG terminal—one in Brunsbüttel, some 30 miles to the north of Stade, and a third in Wilhelmshaven, a nearby marine base that has a deep-sea container ship terminal. German officials said Stade and Brunsbüttel are front-runners due to their advanced stage and location advantages.

Germany is phasing out nuclear power while building wind and solar power in its place and heavily using coal as back-up power. To meet its climate targets, however, it will need to use natural gas, which has a lower carbon content than coal. Production of natural gas in the Netherlands is expected to be phased out within a decade and U.S. LNG could make up for that share of the German gas market.

German lawmakers were told that the terminal will likely not break even for at least 10 years. A 2016 University of Cologne study found that the German terminal would not be viable in the short term since the market’s LNG needs could be covered via an existing terminal in the Netherlands.

Germany is dependent on Russian natural gas for over 50 percent of its natural gas needs. There is a natural gas pipeline that brings the gas to Germany from Russia and a second natural gas pipeline is proposed, which would make Germany even more dependent on Russia for its gas supplies. Despite German lawmakers being told that the LNG terminal would not be economic for a decade, Germany is planning to assist in building at least one LNG facility. The country is currently phasing out nuclear power and using coal as back-up to its wind and solar units. Natural gas has a lower carbon content than coal and would help the country meet its climate targets if it were used instead of coal.

The consequences of increasing U.S. energy production are reshaping the world’s economic and geopolitical systems, and strengthening the influence of the United States in the world.

Editor’s Note: The LNG Germany will be importing will most likely come through Cove Point, which means it’s going to be gas produced in Ohio, Pennsylvania and West Virginia (Maryland and New York have cut themselves out to pander to hasty pudding head fractivists). Think of it, as one NaturalGasNOW commenter brilliantly observed, as “Appalachia Rising.”

It’s also important to note Germany’s reluctant support of LNG is an admission its politically correct but policy stupid Engeriewende scheme has failed in every way. It has not achieved the greenhouse gas emission reductions it was designed to accomplish. It led to more and more use of brown coal, the dirtiest coal there is. It made Germany more dependent on Russia. It was sheer stupidity.

It takes me back four years ago when I had this little debate on the sidewalk outside SUNY Oneonta with a couple of fractivists who apparently moved to the area from the New York City or environs (where energy stupidity is considered dazzling intelligence) and thought Germany was the model for New York to emulate. They were there for a Josh Fox event and 40 or so of us were there to protest.

Germany isn’t fracking yet, of course, but now they’re admitting they’ll need to buy our Appalachian gas if they don’t want to be eaten by the Russian bear. Love it!

3 thoughts on “Germany Surrenders: Effectively Admits Energiewende Was A Failure”