[Editor’s Note: The Delaware Riverkeeper ran to a RINO judge to secure the right to intervene in a DRBC lawsuit. He rolled over and granted it.]

Apparently, the staff who run the day-to-day business of the Delaware River Basin Commission (DRBC) is incompetent and can’t defend itself. Every time they are challenged in court, they run crying to mommy and daddy (Teresa Heinz Kerry at the Heinz Endowments and Shawn McCaney at the William Penn Foundation), which in turns launders money (i.e. hires lawyers) through the Delaware Riverkeeper to help bail the DRBC out of legal trouble.

A federal judge (appointed by swamp-dweller George W. Bush) ruled last week to allow Riverkeeper (Heinz & Wm. Penn) to “intervene” (become a party to) a lawsuit launched by Pennsylvania Senate Republicans against the DRBC over the organization’s illegal taking of property rights by banning fracking in the river basin. 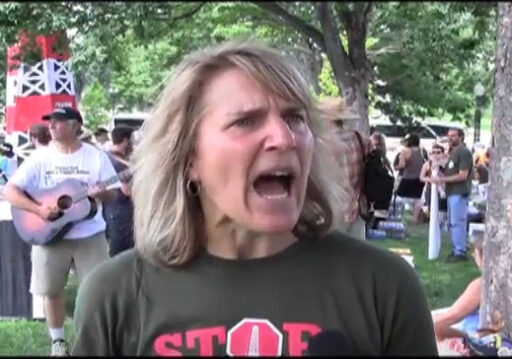 In a brilliant move aimed at boxing in the DRBC, two northeastern Pennsylvania State Senators–Gene Yaw and Lisa Baker–along with members of the PA Senate Republican Caucus, filed a lawsuit in January against the DRBC accusing the quasi-governmental agency of “taking” the property rights of PA residents without just compensation under the law.

The DRBC has, for more than a decade, has refused to allow shale gas drilling in its jurisdiction, which includes portions of Wayne and Pike counties in northeastern PA. Last Thursday the DRBC finally made the ongoing moratorium/ban official and permanent.

Riverkeeper arrogantly claims to be THE voice that speaks for the river, even though the river has an entire commission with a full (if dysfunctional) staff dedicated to it. On Friday a federal judge ruled Riverkeeper (fronting for Heinz Endowments and the William Penn Foundation) can intervene–get the right to file motions and otherwise interfere with–the lawsuit on the side of the DRBC, to help the inept staff at DRBC defend itself.

On February 25, the U.S. District Court for the Eastern District of Pennsylvania approved the Delaware RiverKeeper Network’s motion to intervene in the PA Senate Republican Caucus lawsuit against the Delaware River Basin Commission’s ban on hydraulic fracking gas drilling.

The approval to intervene was issued the same day as the Delaware River Basin Commission’s vote to make the ban permanent.

On January 11, the entire PA Senate Republican Caucus filed the lawsuit in federal court challenging the DRBC moratorium on drilling.

Sen. Gene Yaw (R-Lycoming), the Majority Chair of the Senate Environmental Resources and Energy Committee, and Sen. Lisa Baker (R-Luzerne) as well as the entire Senate Republican Caucus and Damascus Township in Wayne County joined in the lawsuit against DRBC.

This is the first major Republican environmental initiative of the new legislative session.

The lawsuit is being filed in support of ongoing legal efforts by Wayne County landowners to overturn the Delaware River Basin drilling moratorium dating back before 2017.

“The Delaware Riverkeeper Network rises to the challenges that threaten the Delaware River Watershed’s communities and irreplaceable natural assets. The development of shale gas, fracking and its operations have wreaked havoc on the environment and public health everywhere it occurs,” said Tracy Carluccio, Deputy Director, Delaware Riverkeeper Network. “We will defend the Delaware River Watershed from attack by the PA Senate GOP Caucus lawsuit through our intervention. This ill-informed and politically-driven lawsuit simply has no credence. The decisions made in our Watershed, including the essential ban on fracking, need to be made based on science, and what is best for the watershed and the communities, human and nonhuman, that live here and the millions of people who rely on the Delaware River for drinking water.” 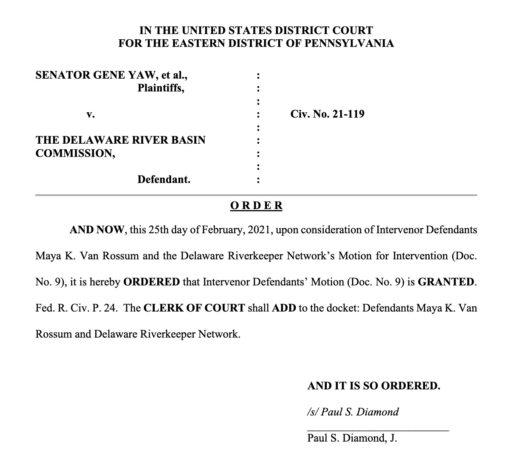 Editor’s Note: Judge Paul Diamond is a ‘Republican In Name Only,’ a RINO who once served as Arlen Specter’s campaign treasurer and legal counsel. Specter was an awful Senator in every respect and eventually became a Democrat, of course. Diamond was also the Judge who refused to intervene to call a halt to Philadelphia’s 2020 election shenanigans. What more do you need to know? This is par for the course but it takes nothing away from the significance of the lawsuit filed by Yaw, Baker and others, which dovetails perfectly with the DRBC’s decision to prove to the world that it, in fact, is stealing natural gas rights.