The Constitution Pipeline is still committed to building the FERC approved infrastructure project in spite of Governor Cuomo putting politics before people.

Landowners, local elected officials, union members and natural gas industry workers all came together at the rally to urge approval of the project for New York’s future. For the thousands of jobs – both direct and indirect – it would create as well as the multiple plants waiting for more affordable energy from the pipeline, like Amphenol Aerospace in Sidney, New York. 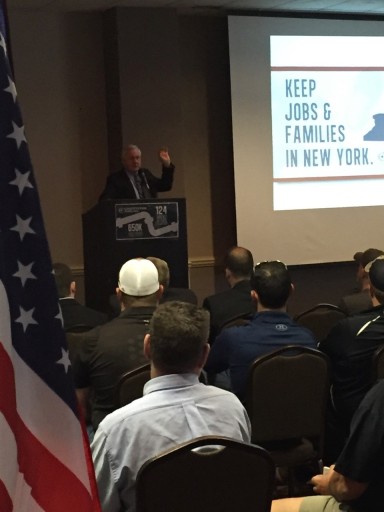 Unfortunately, this decision by Governor Cuomo has denied these opportunities to the southern tier of New York while simultaneously denying residents a supply of affordable, abundant, clean-burning natural gas which the state’s energy plan calls for. Most disheartening is the rationale – or lack thereof – for denying this permit is based on misinformation and falsehoods rather than facts.

The permit denial quickly drew statements from the American Petroleum Institute (API) and The Business Council of New York State (BCNYS) among others.

“The Cuomo administration’s decision to reject permits for the Constitution Pipeline is another example of politics at its worst.”

The BCNYS further addressed the economic impacts of this decision:

But the story doesn’t end there. 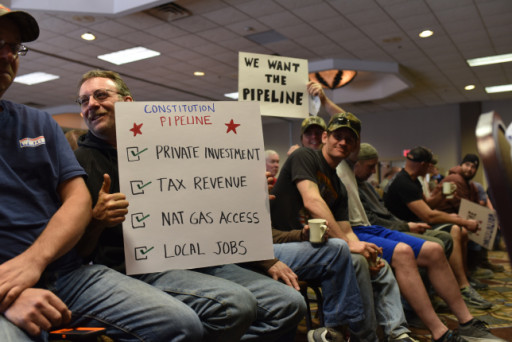 Just this morning, Constitution Pipeline posted the following statement to their website which reaffirms their commitment to the project and addresses some of the reasons given by the Governor’s administration for the denial of permits.

“In spite of NYSDEC’s unprecedented decision, we remain absolutely committed to building this important energy infrastructure project, which will create an important connection between consumers and reliable supplies of clean, affordable natural gas. We believe NYSDEC’s stated rationale for the denial includes flagrant misstatements and inaccurate allegations, and appears to be driven more by New York State politics than by environmental science,” the project sponsors said in a joint statement.

Constitution Pipeline worked closely with NYSDEC staff for more than three years to ensure that water quality measures are met before, during and after construction. As a result of that dialogue, Constitution Pipeline voluntarily agreed to the agency’s requests to incorporate re-routes, adopt trenchless construction methodologies, commit to site-specific trout stream restoration and agreed to fund approximately $18 million for wetland mitigation and banking and approximately $8.6 million for the restoration and preservation of migratory bird habitats.

“We worked in good faith with the NYSDEC for years, so this decision comes as a surprise and is contrary to our dialogue and collaborative effort to address concerns. The FERC-certificated route was developed after extensive environmental and engineering analysis, which included a comprehensive review of route alternatives. In its Final Environmental Impact Statement, the FERC concluded that environmental impacts associated with these alternatives were significantly greater than the preferred route. Despite this, in the spirit of collaboration we followed NYSDEC guidance and further altered our preferred route to adopt NYSDEC staff recommendations.”

“We were informed by the NYSDEC that the agency had everything it needed to process the water quality certification. This point was further emphasized when the agency issued a notice on Dec. 24, 2014, indicating that the application was indeed administratively complete.”

“Contrary to NYSDEC statements, the company was not informed of any outstanding issues that it had not agreed to address as a condition of the permit. In fact, during the past nine months, weekly inquiries were made to the department to ensure no additional data was needed. Those inquiries were either ignored or responded to in the negative. It is obvious that the NYSDEC deliberately chose to remain silent to bolster the political campaign of the State.”

In addition, NYSDEC’s claims regarding Constitution Pipeline’s knowledge of landowner tree felling activity are completely inaccurate and contradict the third party environmental monitors working on behalf of FERC. The federal monitors confirmed that Constitution was not a party to the tree felling, and their Environmental Compliance Monitoring Report has been available since March 18, 2016, to both NYSDEC and the public at: (http://elibrary.ferc.gov/idmws/file_list.asp?accession_num=20160318-4003).

The company also takes serious issue with claims that its application lacked information related to stream crossings, depth of pipe, or blasting.

The project sponsors continued, “Completely contrary to NYSDEC’s assertion, we provided detailed drawings and profiles for every stream crossing in New York, including showing depth of pipe.  In fact, all stream crossings were fully vetted with the NYSDEC throughout the review process. We are appalled with the comments that Constitution failed to provide sufficient data to ensure every crossing was totally in compliance with the NYSDEC guidelines.”

“Constitution Pipeline did not refuse to provide a comprehensive analysis of pipe depth.  Constitution committed to bury the pipe at least five feet or deeper below the lowest bed elevation of the stream bed in unconsolidated bedrock, which exceeds the federal regulations for pipe depth.  After weekly meetings and site visits with NYDEC, the company also committed to conduct geo-technical borings and develop a feasibility report which would be provided to the NYDEC after the permit was issued for specific stream crossings which were identified by NYDEC.”

The project sponsors will pursue all available options to challenge the legality and appropriateness of New York’s decision particularly since it is based primarily on (a.) comments previously made by New York to FERC which FERC carefully considered before issuing its Certificate of Public Convenience and Necessity for the Project; and (b.) factually inaccurate assumptions and assertions.

The Federal Energy Regulatory Commission (FERC) on Dec. 2, 2014 issued its certificate of public convenience and necessity for the Constitution Pipeline. In its final environmental review of the proposed Constitution Pipeline, FERC concluded that environmental impacts would be reduced to “less than significant levels” with the implementation of proposed mitigation measures by the company and recommendations by FERC.

The permit denial will also delay about 2,400 direct and indirect jobs that would be created during pipeline construction, generating $130 million in labor income for the region. The decision could also cost local governments approximately $13 million in annual property tax revenue.

The 2015 New York State Energy Plan specifically recognized the role of the Constitution Pipeline, projecting that natural gas usage will increase during the next 15 years, and by 2030, natural gas will provide the largest share of any single fuel source.  Much of this additional natural gas will be used to help generate electricity while also enabling the state’s adoption of more renewable energy sources.