Political observers say the great divide in the US is city vs. countryside. They’re correct and Upstate New York faces a grim future unless things change.

One of our readers brought an interesting article to my attention yesterday that hit upon a great point and, yet, missed the most important things. It was a post by Damon Linker on a blog called The Week. Entitled “It’s Not Elites vs. Populists; It’s City vs. Countryside,” the piece looks at our politics and observes the vast gulf between urban and  rural voters. It’s on target in that respect, but fails to hit the bullseye, especially as it relates to natural resources and energy issues about which the two parts of our nation are as different as could possibly be. That difference is why I question whether Upstate New York can ever get well. 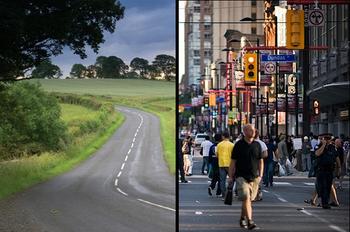 I was intrigued by Linker’s title and found these paragraphs were very close to the truth:

These socio-cultural and political differences are partly rooted, in turn, in the enduring experiencing of life in both places. In the low-density and underdeveloped countryside, people live in much closer proximity to nature, surrounded by forces human beings only marginally control. In that context, individuals, families, and communities tend to feel smaller, less omnipotent, more vulnerable.

In cities, by contrast, people live in a largely controlled environment, surrounded by pavement and concrete, dwarfed by large buildings constructed by human beings, immersed in massive infrastructure projects. Nighttime illumination even blocks out the stars, replacing the vault of the heavens with the rapidly moving blinking white and red lights of the airplanes that shuttle us from city to city at all hours of the day and night. It’s a largely artificial world created by people and insulated from extra-human forces that, to a remarkable extent, we’ve succeeded in mastering for the sake of human betterment.

I say very close because Linker implies two things not quite true. First, he suggests imagining we are anything less than omnipotent is a weakness. Then, he goes on to suppose cities are evidence we’ve mastered nature and improved lives by doing so. Chicago murder statistics, Detroit bankruptcy, Baltimore unrest and a host of other examples of urban rot tell me otherwise. Pardon me, but I’m thoroughly unimpressed with the arrogant attitude of omnipotence that has led to these disasters.

Nowithstanding this, it’s readily apparent what Linker says about our different perspectives is undeniably true. What bothers me is his condescending explanation, which may be summed up in his apparent belief cities are where the action is and where smart people go, leaving behind a forlorn group of rural hangers-on with no future. That is the all-too typical perspective of the “What’s Wrong with Kansas” crowd who suppose we rural folks should be delighted to have our smart city cousins run our pitiful lives for us. Linker is blinded by his narrow perspective and misses the big point.

That big point is this; neither cities nor countryside can survive without the other, but the city folks seem to imagine it is so. Although Linker mentions mining to rightly criticize the bone-headed ultra-partisan Paul Krugman, he doesn’t delve at all into the relationship between city and countryside, which is symbiotic. No doubt about it; the city is where wealth is produced. Density allows the division of labor and specialization that, in turn, permit new wealth to be created. This is why incomes will alway be higher in cities. The cost of living is also higher, of course, but the net effect is still economically positive for city life.

Having said this, it is also true that cities, because they are concentrated, must import food, energy and other natural resources from rural areas where they can be produced. No city can survive without the food produced on some farm, the lumber grown in some forest or the energy produced from developing natural resources in some far-flung place.

Also, because cities are specialized, they are vulnerable to what Hayek called the “fatal conceit,” what may be described as the false notion that expertise in one speciality is expertise with respect to all things. We never seem to learn it isn’t so. We suppose no problem is so big that throwing more experts at it won’t solve it, which has led to one modern fiasco after another, as “whiz kids” have started wars, destroyed cities and committed unimaginable atrocities in service to the “common good” as defined by various statists.

This fatal conceit is what has, too, led so many city folks to imagine they know better how to grow food, make energy and deliver their other necessities. They suppose there’s no need for fracking, natural gas, pipelines or any of that stuff; thinking it’s just a matter of shifting to solar or wind while conveniently forgetting those produce far more land disturbance than natural gas development. They have next to zero understanding of what it means to own and use land, in fact.

Yet, despite this lack of knowledge and perspective, they have the sheer numbers and the will to prevail when it comes to politics in a state such as New York. The countryside voters of Update New York are hopelessly outnumbered by the millions of urban New York counterparts who haven’t a clue and just expect the heat and the air conditioning (not to mention the food and building materials) to be there when needed.

It’s not this way in every state, although every state has some of it. The Empire State, unfortunately, is completely unbalanced. Upstate New York has no chance to escape its fate at the hands of naive city dwellers unless there is real leadership from state officials who do recognize where energy is produced and how.

Sadly, experience indicates no such leadership exists in New York. Rather, it’s demagoguery and political correctness 100% of the time. There’s no diversity of thought, no chance of Upstate New York’s future being addressed with anything other than meaningless words and token consolation prizes. Cuomo’s December 17, 2014 decision on fracking was his day of infamy; the date when he surrendered completely to the city view and wrote off the countryside.

Still, all is not yet lost. Why? Because the dependence of city on countryside cannot be wiped out with a pen. Economic laws still prevail. The first time New York City goes dark for lack of natural gas, the demand to do something and not be dependent on someone else for energy will be overwhelming. Opinions will change on a dime and we’re headed there. It’s too bad crises are what it takes but that’s the price of a city-based politics that fails to take into account the needs of the countryside because those needs are its needs as well. They’re just too blinded to see it.

6 thoughts on “City vs. Countryside: Can Upstate New York Ever Get Well?”