[Editor Comment: So, California, crazier than imagined, is now feeling the pain of forced renewable mandates and green virtue signaling. Even Newsom knows!]

California does it again. In 2001, California experienced rolling blackouts due to energy market manipulation by energy wholesalers and a shortage of pipelines. Now, Californians are again facing rolling blackouts, and this time it is due to California’s forced reliance on solar and wind power. Due to a severe heatwave and without the wind blowing and the sun shining, California’s day-ahead electricity prices spiked at above $1,000 per megawatt-hour on August 14.

California’s renewable portfolio standard mandates that 60 percent of its electricity must come from renewable energy (mainly wind and solar power) by 2030.  Now, residents are asked to conserve electricity to keep the power on—something most other states do not have to endure. This should be a warning to America about the risks of Biden’s Clean Energy Standard that would require 62 percent of our electricity which is now produced from natural gas and coal to come from non-carbon sources, which would primarily be wind and solar power.

The California Independent System Operator, which manages the power grid, declared an emergency shortly after 6:30 p.m. on August 14 and directed utilities around the state to decrease their power loads. Pacific Gas & Electric, the state’s largest utility, needed to turn off power to about 200,000 to 250,000 customers in rotating outages for about an hour at a time. Other utilities were told to do the same, affecting up to 4 million people.

The emergency declaration ended just before 10 p.m. The requirement to shed load resulted from temperatures hitting triple digits in many areas, resulting in higher air conditioning use. In addition, cloudy weather from the remnants of a tropical weather system reduced power generation from solar plants. California’s solar mandates are making the state much more reliant on the weather for electricity production.

California generally produces a surplus of solar energy during the day and when that happens, other power generators are ordered to cut back their production so that the electric grid is not overloaded. On Friday and Saturday, August 14 and 15, about 1,000 megawatt-hours were curtailed—enough to power 30,000 homes. This curtailment resulted in supply shortages as solar energy output plunged at the end of the day with the electricity demand remaining high.

Many of California’s natural gas and nuclear plants have had to shut down because they cannot compete with heavily subsidized renewable energy. For example, a 10-year-old natural gas power plant in California’s Inland Empire is being prematurely shuttered this year despite being built to operate for forty or more years. Also, California’s state water regulations are forcing the shutdown of natural gas plants along the coast that can quickly ramp up generation during peak demand periods or when solar power plunges. Because of policies promulgated by California’s anti-fossil energy politicians, Californians are paying for new renewable power when they already have natural gas capacity readily available to meet demand 24/7.

Because the spot price for power in the summer can increase more than 30-fold from noon to dusk, California’s utilities are forced to build expensive batteries to store solar energy that can be released in the evening, which will cost Californians even higher electricity prices, despite its prices already being one of the highest in the country. Utilities do not mind this result because new capital investment necessitated by government actions ultimately means higher prices for consumers and higher profits for utilities.

California’s blackouts are a product of its politically-determined reliance on intermittent, unreliable renewable energy, not a product of heatwave.  So far, California’s environmental policies have resulted in 1.3 million megawatt-hours of reliable power being curtailed this year. Due to the state’s renewable portfolio standard and its subsidization of wind and solar energy, the state is suffering from the loss of reliable power that cannot compete with the state’s environmental policies. Natural gas and nuclear power plants are being shuttered.

In fact, the state’s only remaining nuclear plant, Diablo Canyon, which provides 20 percent of the state’s carbon dioxide-free energy and 9 percent of its electricity, is scheduled to shut in a few short years. As a result, when temperatures rise, Californians need to curtail electricity usage and suffer from rolling blackouts as well as paying some of the highest electricity prices in the nation. Currently, most states do not need to endure the loss of power when temperatures escalate due to sufficient power from reliable sources—coal, natural gas, and nuclear power.

Americans need to be aware of Joe Biden’s Clean Energy Standard, which would put them in the same position as Californians, who are reliant upon intermittent wind and solar power. This episode should be a wake-up call for politicians thinking of jumping on the green energy bandwagon; it appears the wagon is headed for a cliff. 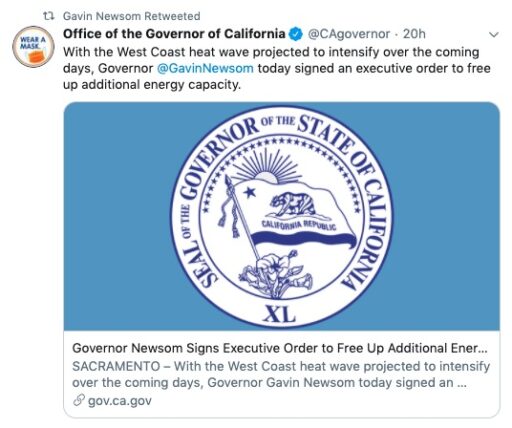 Funny how that works, isn’t it?