A NaturalGasNOW reader uses a Andrew Cuomo letter to his constituents about one of his priorities to illustrate how bizarre they are compared to reality.

I had a laugh out loud moment this morning when I received an e-mail that appeared to come from New York Governor Andrew Cuomo (I’m on Andrew’s list even though I’m a Pennsylvanian and never write much of anything good about him). I get them all the time, in fact, and I didn’t look closely at the name of the sender until after I opening it, so it was quite startling to read this:

I realized, at the second paragraph, that this was a parody, but what a good parody it was, especially when you know what the original letter was about and what it revealed about this pandering governor’s real reactionary priorities. Here’s the original:

Now, be honest; which of these two letters makes more sense in a real world? That the Governor of New York, the supposed Empire State, is more worried about nail salons than the economy of his state or its energy supply tells all. Perhaps the state would be better off if he spent more time getting his own nails done and less time governing, if you can call it that. Or, perhaps he’ll simply be nailed soon. 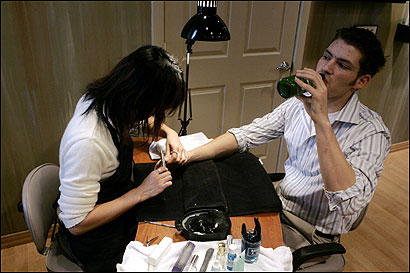 Is that Andrew Cuomo getting a manicure?