[Editor Comment: Tom Wolf is trying to simply put Pennsylvania into RGGI on his own over the bi-partisan objections of his legislature and it isn’t working.]

The Regional Greenhouse Gas Initiative (RGGI) is a cap-and-trade program to reduce greenhouse gas emissions undertaken by a coalition of ten states in the Northeast and Mid-Atlantic regions. Electric utilities that emit more greenhouse gases than their assigned cap must buy allowances at auction to offset the excess emissions. In the most recent auction, the cost of carbon dioxide allowances increased by 18.6 percent. Allowances sold for $6.82 a metric ton in the third quarter of this year–$1.07 higher than the previous quarter. The auction raised $110.4 million, which will be added to consumer electricity bills and the proceeds will be divided among the 10 participating states—Connecticut, Delaware, Maine, Maryland, Massachusetts, New Hampshire, New Jersey, New York, Rhode Island, and Vermont—to be used in government programs to curb greenhouse gas emissions. Virginia’s Democratic legislature has opted to join RGGI next year. Pennsylvania’s Governor Tom Wolf wants to join the following year, but his legislature is putting obstacles in the way. 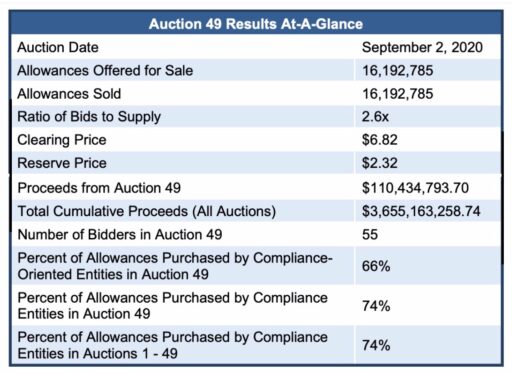 Pennsylvania’s economy has boomed due to hydraulic fracturing, which has enabled the state to become the second largest producer of natural gas in the nation. The fracking boom has in turn attracted other job-creating industries. Since 2009, low natural gas prices have resulted in more natural gas generating capacity that has helped to reduce carbon dioxide emissions by 33 percent.

Pennsylvania’s inclusion in RGGI is expected to lead to the closure of coal-fired and older natural gas power plants that would no longer be economic when the carbon tax is added to their cost of operation. According to Tom Wolf, the tax would produce $2.36 billion over the next 10 years.  Pennsylvania consumers would pay this additional cost through their electricity bills.

The Power PA Jobs Alliance—a coalition of labor, management, and consumer stakeholders—disputes the Department of Environmental Protection’s claim that cutting carbon dioxide emissions from power plants would save billions of dollars and hundreds of lives.

The state’s analysis shows no decrease in carbon dioxide emissions, but instead a shift in generation and jobs to neighboring states that do not have the tax, such as Ohio and West Virginia, whose fossil fuel power plants, many of which are located along Pennsylvania’s western border, will generate additional electricity, at least partially offsetting any carbon dioxide reductions from plant closures in Pennsylvania.

The closure of the Pennsylvania plants will also lead to the loss of thousands of jobs and tax revenue to school districts and communities where those plants are located, as well as millions of lost tax revenues to the state. As they see it, Pennsylvania would export jobs and money to other states and in return, import electricity.

In July, the Pennsylvania House of Representatives passed legislation that would allow only the General Assembly to impose a tax. It is believed that the Governor’s entrance into the RGGI without legislative approval violates the state’s constitution. The state’s Senate Environmental Resources and Energy Committee voted to move to Senate floor two proposed bills on the RGGI. Both bills are proposed as the “Pennsylvania Carbon Dioxide Cap and Trade Authorization Act.”

Either bill would authorize the General Assembly, “working together with the Department of Environmental Protection, the Environmental Quality Board, the Pennsylvania Public Utility Commission and other important stakeholders, to determine whether and how to regulate or impose a tax on carbon dioxide emissions.” The bills are meant to give a voice to those entities that would be impacted by a carbon tax on the production of electricity in Pennsylvania.

RGGI is a cap-and-trade program that results in a hidden tax that must be paid by residents and businesses. Entry into the RGGI requires careful consideration of the benefits and costs. As a result, the Pennsylvania legislature wants to make sure that the state residents have a voice in the decision and approved a bill to do so, but Pennsylvania’s Democratic Governor Tom Wolf plans to veto it.

Joe Biden’s “clean energy” mandate and climate plans would put the nation in similar circumstances to the people of Pennsylvania. He plans to have Congress address reductions in greenhouse gas emissions, which will likely entail an explicit or implicit tax on the use of fossil fuels, which will raise the cost of energy to consumers. Residents in Connecticut—an RGGI state—are already complaining about the expense of their electricity bills, giving Pennsylvania and the rest of the country a possible glimpse into the future.