The Green New Deal is not only fantasy, but also dangerous politicization of what should be serious issues, contaminating everything with authoritarianism.

The Green New Deal (GND) has brought the specter of full-blown government central planning into full view. But far from hedging, the Progressive Left has doubled down by declaring war on market capitalism, not just oil and natural gas. 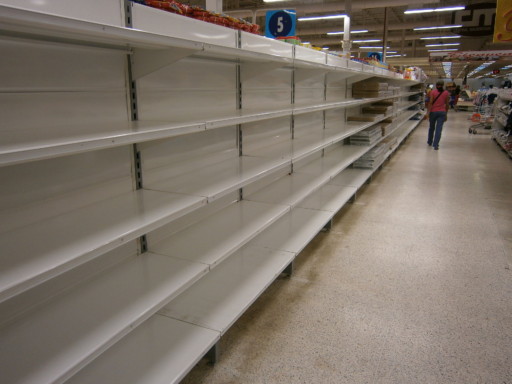 Empty Venezuelan shelves that are the natural result of the same socialistic philosophy that infuses the “Green New Deal.”

“Capitalism is destroying the Earth,” an article in The Guardian last month by columnist George Monbiot read. Private ownership of land, and “natural wealth” more generally, must be rethought. Moving to “a circular economy from which materials are never lost” and “the end of fossil fuel combustion” requires “challenging our deepest and least examined beliefs.”

“Ending climate change requires the end of capitalism,” read the title of another Guardian article by economics writer Phil McDuff. His message? “Policy tweaks won’t do it, we need to throw the kitchen sink at this with a total rethink of our relationship to ownership, work and capital.”

McDuff expressed surprise that the GND received backlash as radical and a Trojan Horse for socialism or Marxism. His is a good point. Well before the GND opened the curtain, authoritarianism, even totalitarianism, was the means to fanciful climate stability.

Consider a study commissioned for the forthcoming UN Global Sustainable Development Report (GSDR), publicized upon its release with headlines as “This is How UN Scientists are Preparing for the End of Capitalism” and “Scientists Warn the UN of Capitalism’s Imminent Demise.”

The August 2018 report, like Alexandria Ocasio-Cortez’s GND, did not frontally declare the end of capitalism. But, the huge transformation is clearly beyond the ability of capitalism, even democracy, to effectuate.

Why? Because the workhorse energies of industrialization are no longer usable. “The era of cheap energy is coming to an end,” the study explains.

Because economies are for the first time in human history shifting to energy sources that are less energy efficient, production of usable energy (exergy) will require more, not less, effort on the part of societies to power both basic and non-basic human activities.

Good quality, easily available fossil fuels have powered the industrialization of nations world-wide. Now, the entire energy infrastructure needs to be transformed. The energy return on investment (EROI) decreases across the spectrum…

Because renewables have a lower EROI and different technical requirements, such as the need to build energy storage facilities, meeting current or growing levels of energy need in the next few decades with low-carbon solutions will be extremely difficult, if not impossible. Thus, there is considerable pressure to lower total energy use.

“Extremely difficult, if not impossible”? That trashes two generations of argument that both conservation for its own sake (conservationism) and renewable energies are cheaper and profitable, recently restated by Amory Lovins and Rushad Nanavatty in the New York Times.

The free market is about self-interest and profits where the cheapest, highest quality alternatives win. This embedded fact must be reversed where the economic becomes wrong and the uneconomic right, the energy realists/climate alarmists admit.

This reversal is beyond capitalism, as argued by climate alarmists as Paul Ehrlich and John Holdren in the 1970s and Naomi Klein today.

That institution with a monopoly on the initiation of force is required. The UN-commissioned study states:

It is clear from these examples [energy, transport, food, housing] that strong political governance is required to accomplish the key transitions. Market-based action will not suffice –even with a high carbon price. There must be a comprehensive vision and closely coordinated plans. Otherwise, a rapid system-level transformation toward global sustainability goals is inconceivable.

A carbon tax by itself is woefully inadequate:

A key problem with carbon pricing has been that states, federations, or unions have not implemented it on a sufficiently high level, fearing industrial leakage to less environmentally-regulated countries. For this reason, many economists and politicians hope for global carbon pricing.

[I]t would be highly unlikely that even global carbon pricing would guide economic activity in the right direction –at least with sufficient speed and breadth. As a policy tool, carbon pricing lacks the crucial element of coordinating a diverse set of economic actors toward a common goal. Individual actors would have an incentive to decrease carbon emissions, but they would still compete through their own business logics; there would be nothing to ensure that any one business logic would support the transition to sustainability on a systemic level. Moreover, it has been extremely difficult in recent years to settle almost anything with such a wide impact on an international level.

In view of the challenges encountered today in implementing meaningful international agreements, the most likely option for initiating transitions to sustainability would be for a group of progressive states to take the lead. This would require economic thinking that enables large public investment programs on the one hand and strong regulation and environmental caps on the other. In the modern global economy, states are the only actors that have the legitimacy and capacity to fund and organize large-scale transitions.

Free Speech at Risk Too

Free speech, not only economic freedom, is at the crossroads to those who insist on climate peril and forced energy transformation.

The effort to suppress global warming dissidents is not new. Grist Magazine writer David Roberts said, “When we’ve finally gotten serious about global warming, when the impacts are really hitting us and we’re in a full worldwide scramble to minimize the damage, we should have war crimes trials for these bastards — some sort of climate Nuremberg.”

Professor Richard Parncutt has called for the execution of prominent “GW deniers.” Climate Progress Editor Joe Romm called for deniers to be strangled in their beds. James Hansen, who has headed NASA’s Goddard Institute for Space Studies, has likewise called for trials of global warming deniers.

The energy/climate revolution must dispense with wrong thinking, this mindset believes. Expect the skeptic books to be lit on fire on the climate road to serfdom.

Upon the release of the Green New Deal, US Senator Tom Cotton was ridiculed for his tweet that “The Democrats’ ‘Green New Deal’ brings to mind an insight from Churchill: Socialism may begin with the best of intentions, but it always ends with the Gestapo.”

But Cotton’s first impression was salient. Both before and after the unveiling of the Green New Deal, the climate warriors have frontally attacked the very economic system and electorates that reject energy self-immolation.

Desperate, the climate alarmists qua forced energy transformationists are authoritarians advocating totalitarianism. This should not only alarm conservatives, libertarians, and the non-political middle. It should also frighten open-minded progressives who care about free speech and social tolerance.

7 thoughts on “The Green New Deal Has Dangerous Authoritarian Roots”