Norse Energy is out of business, workers are out of jobs and leaseholders are out of opportunities due to the nonfeasance of New York Gov. Andrew Cuomo, who will soon be on the receiving end of his own handiwork as Norse Energy sues him.

It seems we haven’t heard the last from Norse Energy. Just last month, the Norwegian-based driller converted from Chapter 11 bankruptcy, or “keep the creditors at bay while we reorganize,” to Chapter 7, or “sell off the furniture and turn off the lights.” There’s still a bit of fight left in Norse, or fight left in its creditors anyway.

The official Norse Energy lawsuit has not yet been filed but according to MDN’s sources, it will be filed in early December. This story is a bit complicated, so we’ll break it down for you and show you the evidence we have that a lawsuit against the Cuomo/Martens/Shah cabal is indeed on the way–very soon…

Leahy’s first tip that something was in the air visa vis a lawsuit against Andrew the Ditherer was this posting on the Naturalgasforums.com website:

Leahy then took to Twitter to see if there was any scuttlebutt about such a lawsuit. He found this tweet from a Binghamton real estate attorney:

Off he went in search of documentation, and Leahy found it, proof positive, deep in the weeds of the Norse Energy bankruptcy proceedings paperwork. Click here to read a copy.

What Does this Say and Mean?

The document above is an application by the Norse Energy bankruptcy trustee, filed with the U.S. Bankruptcy Court Western District of New York (Buffalo) on Nov. 20, that says the trustee, the guy looking out for the best interests of the creditors now left to hold an empty bag, wants to hire attorney Tom West and the Albany-based West Firm to represent Norse in an Article 78 Proceeding.

What is an Article 78 Proceeding? If the New York State government, or a New York government official, refuses to fulfill their constitutionally appointed role, that is, if they won’t do their job, a citizen or company can sue them to force them to do their job. That’s an Article 78. It includes the ability to file for something called a Writ of Mandamus, which is described succinctly here (emphasis added):

The paperwork above is an official request to the court asking permission to hire the West Firm to pursue an Article 78. The actual Article 78 Proceeding has not yet been filed. The U.S. trustee appointed to the case (not to be confused with the overall trustee) accepted the application, but the judge for the bankruptcy case had not, as of noon on Monday, November 25, officially accepted it (yet).

When Will Article 78 Paperwork Be Filed?

With the West Firm now approved by the court, when will they file the Article 78 paperwork? An MDN source has confidentially told us to keep a sharp eye out on December 2nd, the date when the courts re-open after a holiday break. We expect (but don’t know for sure) that the Article 78 will be filed on or about that date.

You may recognize Tom West and the West Firm name. Tom is representing Norse Energy in a different lawsuit against the Town of Dryden, New York over their questionable action of banning hydraulic fracturing for all landowners throughout their rural township. The Dryden case is being funded by unnamed third parties (not Norse and not Norse’s creditors). The paperwork above is mostly a full disclosure of all potential conflicts of interest Tom and his firm may have in taking on an Article 78 case. We see from the documentation above that once again unnamed third parties will fund West’s work on the Article 78 Proceeding when it’s filed.

Is the funding for the Article 78 coming from other drillers? From drilling industry groups? From private individuals? Foundations? Who knows and, frankly, who cares? Anti-drilling lawsuits are constantly being filed with the direct and indirect backing of deep pockets anti-drilling groups. If the industry wants to fund this effort, God bless them. A positive result from any lawsuit that forces Cuomo to act will ultimately benefit landowners and every resident of New York who wants to use clean burning (and cheap) natural gas from fracking.

Norse is Bankrupt, So Why Norse? 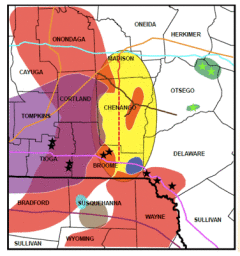 You may wonder why Norse Energy would bother to file an Article 78 Proceeding; especially since they’re ripping up the floorboards and selling them for fire wood (metaphorically speaking). Number one, it’s not costing Norse anything since the Article 78 will be paid for by unnamed third parties. Number two, Norse still has 130,000 acres of leases in its portfolio–assets to sell (in yellow area on map to right). Right now those leased acres are worthless. Who will buy them with no shale drilling in New York? If, however, Cuomo and his lieutenants (Martens and Shah) are forced to release the new drilling regulations and if drilling begins, the value of Norse’s assets goes way up.

What happens next is, we eat turkey, we go shopping on Black Friday, and we wait. And on December 2nd, tune back in to MDN for some (hopefully) very good news.

Be sure to read Andy Leahy’s take on this story here. A big hat-tip to Andy for breaking the story.