There is another DRBC meeting coming next month and we are informed that, yet again, nothing will happen regarding the draft gas drilling regulations completed over two years ago as the agency delays, obfuscates and, beneath the surface, helps deny landowners their rights.

If you’re like me, you probably don’t know there is a malady called “paddling duck syndrome.”  A pop psychologist (therapist, actually) by the name of Dr. Carol describes it as follows:

It’s a real issue and many health professionals have written about it, but what brought it to my attention was an article about another Carol; the Executive Director of the Delaware River Basin Commission (DRBC), Carol Collier.  The article appeared in Winter, 2011 issue of Emma, a glossy publication put out by the Emma Willard School, the elite boarding school where Collier spent her high school years (see cover and starting at page 27).  It was a puff piece celebrating her career and, reflecting upon it, she offers this revealing quote:

“Be calm on the surface, but paddle like crazy underneath. That’s my motto.”

Unfortunately, Collier was telling the truth.  She is doing a lot of paddling underneath and it’s not a malady, but an apparently deliberate effort to muddy the waters and sabotage the natural gas development so desperately needed in the upper basin.

The Emma article was one on those “wink and a nod” pieces where Collier makes the obligatory statements about wanting to achieve a balance, but its tone, which could only be conveyed to the author by the subject of the piece, was largely anti-development.  The headline above the title was “In the biggest challenge of her career, Carol Russell Collier ’69 is protecting a vital resource against the dangers of natural gas drilling.” The text is somewhat more even-handed, but manages to repeat Josh Fox’s falsehoods about his $100,000 offer and suggests hydraulic fracturing threatens water quality even though the draft regulations barely touch on the subject because it’s already regulated).  Then, there is the bizarre projection of 10,000 wells, a number calculated to inflame fears by pretending every square inch of the upper basin will be drilled. Finally, there is the picture of protestors with this caption:

“People are angry. They want answers immediately. ‘Don’t frack with our future’ is a rallying cry.”

That’s anything but the true story, of course, as local fracking opponents consist mostly of second-home owners, aging trust-funders seeking new causes and radical environmentalists but, to naive journalists with some of the same persuasions, it resonates.  The real locals are portrayed as greedy landowners allying with big business to destroy the environment. The reality is much different with farmers and others facing foreclosure as a consequence of an incredibly bad economy and the failure of one agency (the DRBC) and one state (New York) to act on already drafted regulations that might save them. 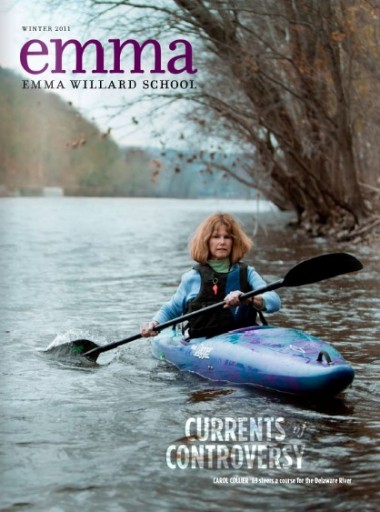 None of that made it into the article, which will come as no surprise to anyone following the way the DRBC has handled this matter, as contrasted with the Susquehanna River Basin Commission, for example.  Also missing from the piece is the amount of time the DRBC had at that point to develop its regulations – three whole years, which were largely wasted trying to re-invent the wheel.

It’s what happened subsequent to the publication of this article that grates most, though, because Collier’s agency didn’t even have the courage to take an up or down vote on the regulations when they were finished.  Did this happen because Collier got too far ahead of her board? Or, failed to provide the leadership needed to make it happen?  Well, no one can know precisely what motives were in Collier’s mind but I do recall a meeting with her about the time the Emma article was being written and I know what kinds of messages she was getting from a wide variety of upper basin communities and their elected representatives.

Those messages were about the need for the DRBC to address the economic part of its mission, not just the environmental one.  Her reaction was a cold stare, as if there could not possibly be any greater cause than saving a tree in a land growing trees a heck of a lot faster than people.  Her tone, albeit soft-spoken, was a lecturing one. She never heard or responded to a word regarding any other possible interests than her own.  Her actions suggested she was just another true believer and, unfortunately, one in a position of power. So, it’s very difficult to believe the DRBC vote postponement and later cancellation was not at least partially engineered by Collier or warmly accepted by her as an opportunity to delay some more.

This brings to the key point. What was Collier doing at the time of the scheduled vote to make it happen?  The answer is that she was paddling hard beneath the surface to provide excuses not to vote, muddying the waters, so to speak.  This was also the time when she apparently arranged to secure money, lots of it, from the William Penn Foundation, the principal funder of the Delaware Riverkeeper, which was (and remains) the primary opponent of any gas drilling regulations.  Simultaneously, she was serving as Chairperson of the Pinchot Institute for Conservation, which was also funded by the William Penn Foundation to help create the appearance, through the Common Waters Partnership, of a local demand for more delay and much heavier regulation by the DRBC.  She was also sitting by as the Delaware Riverkeeper wormed its way onto five of the seven DRBC committees (or, perhaps, was behind those appointments).

The money Collier arranged from the William Penn Foundation was for the ostensible purpose of setting up the sorts of monitoring systems needed to accompany the Natural Gas Development Plan concept she had worked into the draft regulations. It provided the perfect excuse for States such as Delaware (which gets no drinking water from the Delaware River, by the way) and New Jersey to say “Well. lets see where this goes first.”  It gave them a reason not to vote and it was set up at the same time the DRBC tabled action on the regulations. It has all the appearance of a funded delay. 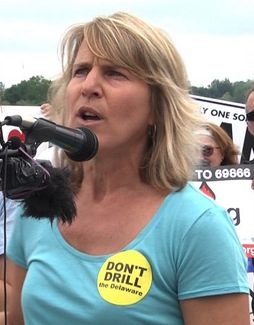 Most of us would see the problem in going to the funder of our supposed nemesis for financial help.  Carol Collier didn’t see it, which indicates she was either extraordinarily naive (at best) or the Delaware Riverkeeper has been more of a friend than an enemy (she is a Facebook friend of Maya van Rossum, pictured to the right, if that counts). Most of us would also see that chairing the Pinchot Institute, another beneficiary and effective arm of the organization indirectly funding the lawsuits against the DRBC over natural gas development, might be a conflict of interest. Collier didn’t see it, perhaps because she didn’t want to do so, just as she sees nothing wrong with putting the group conducting public filibusters of her agency’s meetings on the majority of its committees.

All of this occurred beneath the surface as farmers, landowners and elected officials from Delaware County (NY) and Wayne County (PA) begged for help.  These patient folks heard excuse after excuse about how the Governors wouldn’t vote until after this or that election, how no one could satisfy the concerns of Delaware, New Jersey or New York and so on; excuse after excuse while Collier was laying the foundation for delay and compromising the agency’s position vis-a-vis its relationship with its opponents.  Collier says she stills wants to get gas drilling regulations done before she leaves office in March of the next year.  Really?  All this paddling beneath the surface tells me not to count on it.  You can’t deal with a duck, after all.

2 thoughts on “Beneath the Surface, the DRBC Helps to Deny Landowner Rights”