Despite small victories with natural gas development in Maryland it has been a major struggle the whole way. Even the Cove Point liquified natural gas (LNG) export facility has proven to be a major challenge.

Maryland still has a moratorium on shale gas development and getting it lifted has proved to be an extended battle, a long slog.  The Cove Point facility, which is important to natural gas development not only in Maryland, but throughout the Marcellus Shale region, is currently a natural gas import facility ran by Dominion, a Virginia-based energy company. However, to no one’s surprise, it, too, has faced several hurdles and opposition from the same fractivists who oppose development of the Marcellus in Western Maryland.

The now little-used Cove Point facility is proposed for a $3.4 billion upgrade to transform it into an international LNG export facility. Although there is forward progress here as well, the opposition from the usual suspects has been intense. Understanding the dynamics of the opposition requires stepping back to take a look at the Maryland fractivist circus act when it comes to anything to do with natural gas in our state.

Even after successes with natural gas development in the neighboring states of Ohio and Pennsylvania, Maryland Governor Martin O’Malley decided he needed an advisory committee to study the effects natural gas development might have on the environment and the economy. He created the Marcellus Shale Safe-Drilling Initiative Commission which, unfortunately, included several, very-outspoken anti’s with ideological and political agendas.

Among those who have been kicking and screaming the loudest are Delegate and gubernatorial hopeful Heather Mizeur, Ann Bristow, Ph.D. of the Savage River Watershed Association and Paul Roberts, “a Maryland citizen,” who happens to be a founding member of CitzenShale, an anti-fracking environmental group. 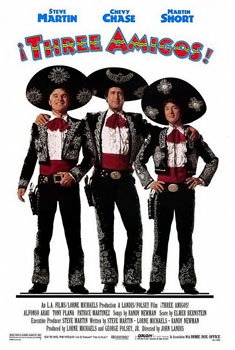 These Three Amigos seem to pride themselves on not allowing any form of natural gas development in this state. Together they have written several press releases and another with a co-advisory commission member, Nicholas Weber Ph.D, membership in the Three Amigos being a fluid thing. Weber is the past chair of the Mid-Atlantic Council of Trout Unlimited and introduced Charles Yoe, Ph.D. to the Commission as an expert, Yoe being a primary advisor to the Chesapeake Climate Action Network (CCAN), an anti-fracking group. Bristow was recently arrested for civil disobedience while protesting the Cove Point project with non-other-than professional serial protester Alex Lotorto. Heather Mizeur, of course, is using her defiant stance of opposition as an election ploy.

The biggest threats to the state’s natural gas development and economic progress, ironically, seem to have been the people put in place to assess it. Indeed, it looked like a shoe-in for defeat. Nevertheless, after a series of recommendations, Governor O’Malley seems to now agree it makes sense for the state to proceed with natural gas development, despite the backlash from his own commission members. One has to wonder it was all an effort to co-opt the fractivists or the man was merely naive. Either way the lesson is the same; dealing with these people is impossible.

Now, the same fractivists are attacking the Cove Point facility. The Three Amigos are again trying to stop any natural gas development whatsoever. Together, they are leading protests. Mizeur on the front lines, not only taking a “no studies, no fracking,” stance, but also saying no to any exports or jobs at Cove Point. 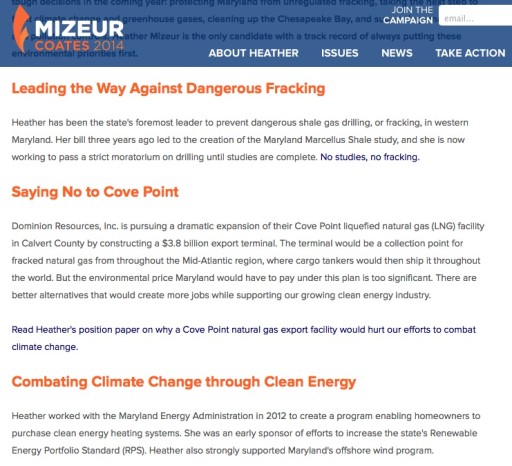 There are, it appears, only two options Mizeur can get her head around. One is wind farming that will have a potentially major impact on our ecosystem by mass killing of birds and bats and hampering our national defense by interfering with radar systems at the U.S. Naval Air Station Patuxent River. The other is solar panels which, in theory, seem like a good idea, until you factor in the cost of subsidies, overseas dependence on manufacturing and rare earth materials, and, oh yes, the toxic waste no government agency wants to handle.

Governor O’Malley and other Board of Public Works members, however, voted to give Dominion Resources a tidal wetlands license. This license would allow Dominion permission to build a temporary pier to transport materials needed for the construction of the upgrade. Dominion has even agreed to move the existing 2-acer oyster population for the construction process and replace place twice as many in the same location once the pier is taken down.

The board members had to listen to opponents, allies of Mizeur, who gathered an hour prior to the meeting, as they complained of climate change, explosions and anything else they could imagine to stall the project. Their principal objective, of course, was that approval of the facility would promote more in-state natural gas development, as if economically lifting Western Maryland in the fashion of this community was a problem.

O’Malley listened to over 2½ hours of testimony before agreeing more studies were not needed and the emissions from the facility would fall within the state’s climate-mitigation effort. State and federal regulators both reviewed the plans in May and also agreed the project posed no significant threats. But, you wouldn’t know any of that if you based your sole opinions on CCAN’s and Mizeur’s propaganda.

So, after all circus acts, none of which damaged the mountains of evidence in support of the project, it was given a thumbs up. Now the only other major hurdle is gaining the proper zoning permits. When the initial permit was over-ruled, protestors were gleeful. CCAN’s Mike Tidwell issued a press release hoping this would dishearten investments stating, “The ruling should certainly give pause to the Wall Street investors that Dominion is seeking to recruit to finance this expensive, risky project.”

No doubt the zoning issue is another hurdle, but the ruling judge also noted this was only a zoning issue that did not weigh in on the whether or not the facility should or should not be approved. Dominion CEO, Thomas Farrell II, is hopeful they’ll receive the proper zoning issuance in the next few weeks, and hope to begin construction shortly thereafter. CCAN’s so-called victory may soon be put to rest as Maryland finally moves ahead.

What’s interesting is the lesson all this provides for dealing with fractivists. The lesson is that you can’t convince them. Rather, you have to beat them and Governor O’Malley has learned the hard way as fracking and Cove Point both move slowly, but inexorably, ahead with some new, unexpected allies fractivists have managed to offend in their zealotry.

Editor’s Note: As a matter of full disclosure to our readers, K.J. Rodgers is my son-in-law and he and his wife, Kelly, reside in Crownsville, MD.