The official justification for the DRBC fracking ban is a fear-mongering diatribe. It supposes equipment failure and human error. It’s analysis paralysis.

Lucius Annaeus Seneca was a Roman philosopher and statesman who died at his own hand in the year 65 AD on the order of Emperor Nero. He lived in especially fearful times. Yet, he penned a wonderful line on fear. It ought to be required reading at about the age every youth enters adulthood:

We are more often frightened than hurt; and we suffer more from imagination than from reality.

It’s hard to think of a more teachable quote for the ages when it comes to the matter of dealing with the new. Newness is never necessarily goodness. Still, nothing much good happens without the new either. Nowhere is this more true than with respect to the shale revolution. It has delivered so much that is good—cheaper energy, cleaner energy, rural economic development. But, it is the subject of unprecedented fear mongering in support of the DRBC fracking ban.

The official version of the justification for the DRBC fracking ban comes down to one simple thing; speculated risks. Here is the key sentence, where the DRBC references an EPA study that was very supportive of the safety of hydraulic fracturing:

The study attributed these to equipment failure, human error, failure of container integrity, and other causes, including but not limited to well communication, weather and vandalism.

A reasonable person will read this and quickly realize there’s not a single risk on the list that could not be used to ban any significant human activity whatsoever at the whim of whoever the statist controllers might be. Equipment failure? Consider this:

Human error? Well, how about this derailment of a train hauling vinyl chloride? Here’s video showing the accident:

The NTSB determined cause of this accident, which could have impacted public water supplies, was human error:

The National Transportation Safety Board determines that the probable cause of the derailment and subsequent hazardous material release at the Paulsboro moveable bridge was Consolidated Rail Corporation (1) allowing the train to proceed past the red signal aspect with the rail slide locks not fully engaged, which allowed the bridge to rotate and misalign the running rails as the train moved across it, and (2) relying on a training and qualification program that did not prepare the train crew to examine the bridge lock system… Contributing to the consequences of the accident was the failure of the incident commander to implement established hazardous materials response protocols for worker protection and community exposure to the vinyl chloride release.

Curiously, the NTSB made 23 separate recommendations to various organizations after the accident and spill, but never remotely suggested rail transportation should be shut down. Could it be that they realize human error is ubiquitous and not confined to one segment of human life? Or, one industry? The DRBC fracking ban is based, of course, precisely on the opposite; the illogical presumption fracking is inherently prone to human error, yet makes not the slightest attempt to compare it to other industries. This is why I have repeatedly said the DRBC arguments amount to the sophistry one might expect from a 9th grader.

And, what about “failure of container integrity” as a justification? Well, there was this diesel oil spill into a Delaware River tributary called Stony Creek back in 2015: 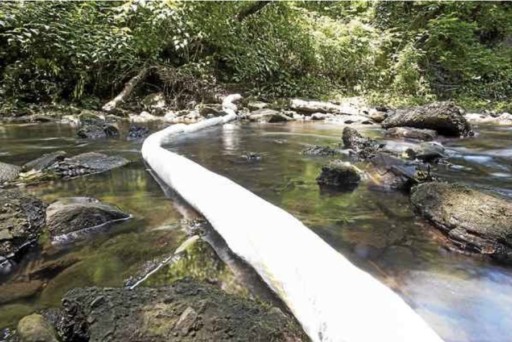 The 10,000-gallon tank, located at the Ridley Township Municipal Maintenance Center at Second and Sutton avenues, had been leaking for about a day, said township Fire Marshal Robert Griffith.

So townships do tanks, too, and once in a great while there’s a leak? Is the DRBC going to ban municipal government? Or, tell townships they can’t store fuel to run their trucks and plow roads in the winter? 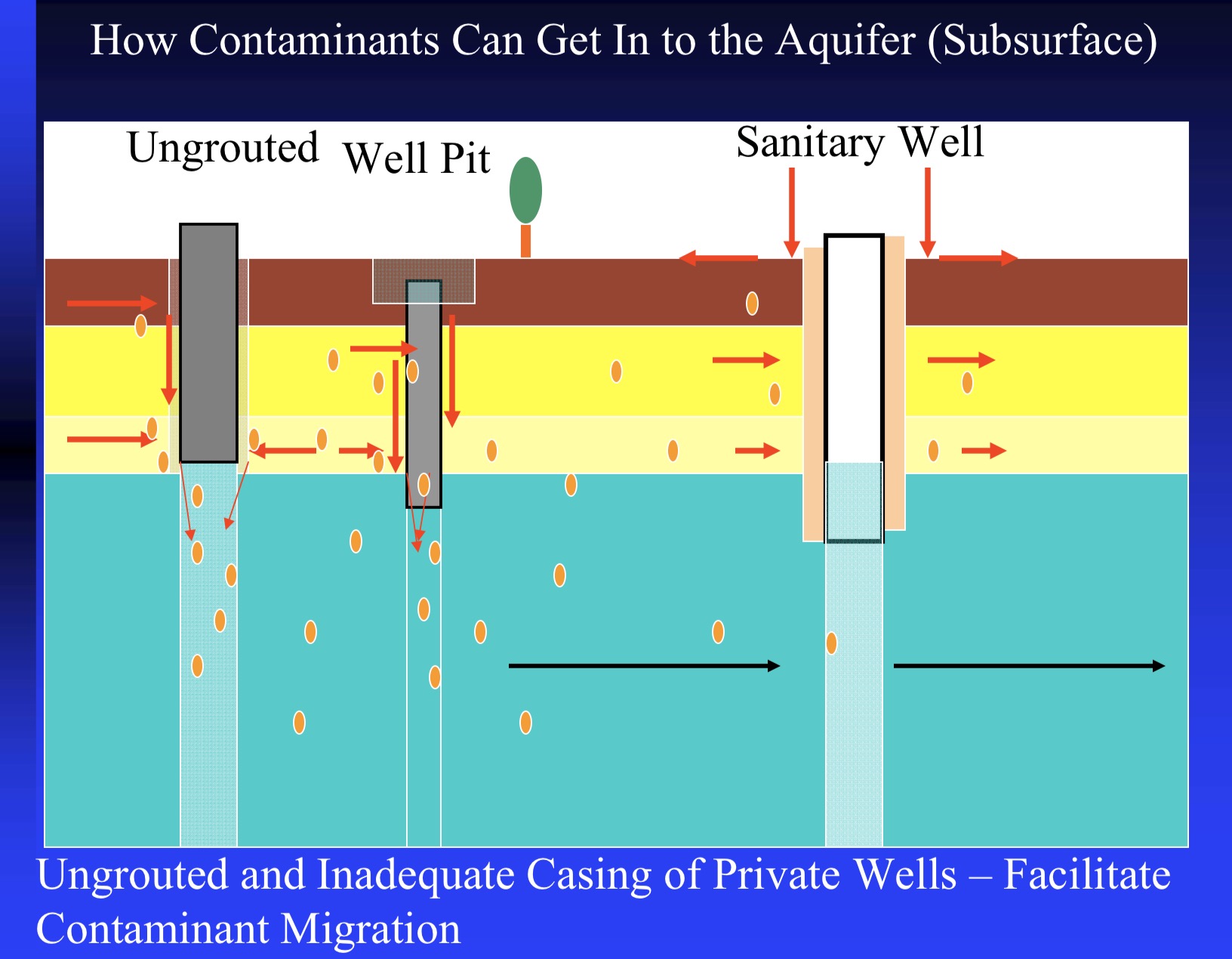 What is the DRBC doing about this? Little or nothing, of course. Its Water Code does require states have programs to register water wells withdrawing 10,000 gpd or more per day, but that’s it. There’s nothing to suggest Pennsylvania, one of the few states with no significant water well standards, should address this problem. Why isn’t the DRBC leading on this instead of threatening to ban fracking. The Center for Rural Pennsylvania put out a report in 2009 that sums up the need:

So, millions of unregulated water wells and 20,000 new ones per year, but the DRBC is worried about well communication problems from a few hundred gas wells with five layers of casing and cement extended to well below the water table?

There’s also weather and vandalism problems, says the DRBC, as if no other industry has ever experienced weather or vandalism problems. Here’s an example from New Jersey, reported in minutes of the Delaware River and Bay Authority, for example:

At Cape May County Airport, an aviation fuel spill of approximately 200 gallons occurred in mid- September at the above ground fuel farm. Staff made appropriate notifications to environmental agencies and contracted EnServ, Inc. to remediate the spill site. The ensuing incident investigation attributed the cause of the spill to vandalism and increased security measures were instituted to avoid recurrence. Final environmental clean-up of the spill site will be completed in October.

Should the DRBC ban airports? No, of course not. The proper response, as it was in this case, is almost always to enact policies that avoid recurrence and improve responses as much as possible. Weather and vandalism will always be with us. The justification for the its proposed DRBC fracking ban is neither smart nor good-intentioned; rather, it is unadulterated fear-mongering designed to support a wholly political appeasement of special interests.

By the DRBC standard, in fact, nothing would ever happen, which is the problem with what it’s proposing and why every industry and anyone at all engaged in anything at all should be worried about such irresponsible corrupt exercise of power as it is occurring in this instance. The DRBC is engaged in a policy intended to make a wilderness of the upper reaches of the basin, strangling every opportunity for serious economic development through regulation, taxes in the form of fees, charges and penalties and now bans. It is doing the dirty work of wealthy families who want the upper basin as a playground for themselves. They want to “strategically parkify” it on the basis of completely fraudulent fear-mongering.

Meanwhile, the lower basin these policies are supposedly intended to protect is a cesspool, according to this 2014 story from DelawareOnline:

Thousands of miles of water run through Delaware, in creeks and streams and rivers and bays, and very little of it is considered healthy. Nearly all of the state’s rivers and streams – 94 percent, the highest amount in the region – are so bad that fish can’t thrive. In 85 percent of them, Delawareans can’t swim. Exempt from these dubious distinctions: the 24-mile Delaware Ocean coast and the Delaware Bay shore. Many days, Delawareans look out over the state’s waters and see only calm and beauty. But the problem of dirty water is real, a product of dangerous toxins, unsanitary runoff and destructive deposits creeping in unseen. If left untouched, Delaware runs the risk of endangering its drinking water supplies, leaving fish caught in state waters too contaminated to eat and losing a multimillion dollar tourism industry built on a promise of clean, clear water…

And south of the canal, the groundwater is often tainted with nitrogen at levels at or approaching the federal Safe Drinking Water Act maximum of 10 milligrams per liter of water. High levels of nitrogen can interfere with oxygen in the blood stream among infants and the elderly…

Around Wilmington, research has shown that some of the region’s top industries also rank as some of the worst water polluters in the 13,000 square mile Delaware River watershed, and significant contributors to toxic contamination that led to fish consumption warnings.

During the past decade, studies tagged Amtrak’s heavy locomotive shops in Wilmington as the far-and-away largest source of PCB contamination from stormwater runoff. The same research tagged the now-bankrupt and abandoned Standard Chlorine Metachem chlorinated benzene plant near Delaware City – once the world’s largest producer of some pesticide and insecticide ingredients – as the top discharger of PCB-laced wastewater.

Other plants, including DuPont’s Edge Moor pigment factory, also were found to be PCB culprits.

“If we do nothing other than what we’re doing now, our models predict it will take another 40 to 50 years for PCB concentrations in the sediments to drop to the level that it doesn’t result in fish contamination, where we need fish consumption advisories,” said Richard W. Greene, watershed assessment scientist for the Department of Natural Resources and Environmental Control.

The DRBC fracking ban is, obviously, a convenient distraction with which to draw away attention from such real problems to those of an invented speculative variety. Giving away the future of upper basin residents is apparently a small price to pay for being able to bury heads in the sands of Delaware’s muddied beaches. And, then there are the rewards of being able to satisfy those wealthy special interests who want the land upstream in return for their allowing things downstream to just go on a little longer the way they are.