A Christmas program launched by Interfaith of Susquehanna and Wyoming Counties receives a big assist from Cabot Oil and Gas and other gas industry partners.

An annual effort by gas industry partners to make Christmas happier for children in Wyoming and Susquehanna counties grew a bit larger this year, as the number of participants in a toy drive and shopping trip increased as did their overall donations. Dec. 5 was an exciting day for those who met at Walmart in Tunkhannock to buy clothing and toys in partnership with Interfaith of Susquehanna and Wyoming Counties and Cabot Oil & Gas Corporation. 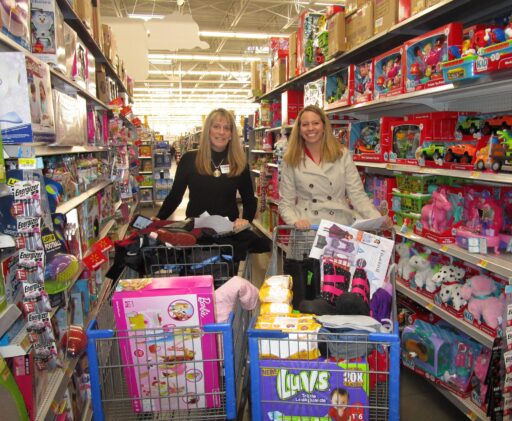 “I wanted to come down and join in the festivities this year,” said Cabot facilities foreman Jeremy Swartz, who like Cabot water engineer Rob Gorczyk, helped in previous years with the unloading and sorting of the gifts after they were transported to Cabot’s Susquehanna County office.

It was also the first time Rachel Barkofsy of Rain for Rent had gone shopping for Interfaith. She liked the idea of filling the wish list provided to her and coworker Rhiannon Moxen, rather than just making a monetary donation to the agency. “These are actual families that need help,” Barkofsky stated. “We are directly impacting them. It’s much more personal.”

Her sentiments were echoed throughout Walmart, as employees from many companies who partner with and do contracted work for Cabot moved from one aisle to the next filling their carts with winter wear, pajamas and slippers, toy trucks, board games and just about anything from the Disney movie Frozen. Moxen was excited that the list that she and Barkofsky were working on this year was primarily for babies.

Rebecca Peterson of Folsom Engineering was shopping for four children, ranging in age from 2 to 16. A returning participant, Peterson applauded Interfaith for streamlining the process. “I like that they know exactly what the kids want and need and that we can get these things to them at exactly the right time,” she remarked. 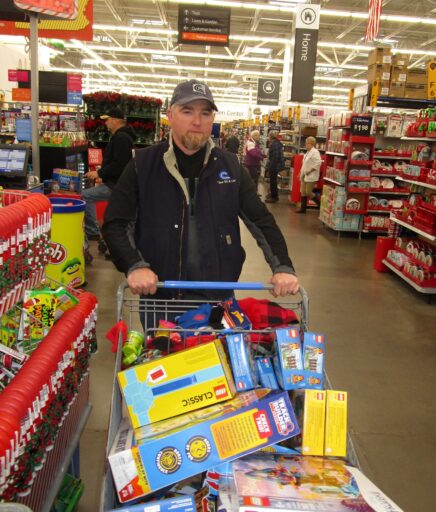 During a period of open enrollment, parents submit wish lists for their children. According to Susquehanna County Interfaith director Cindy Beeman, more than 800 children were deemed eligible this year. She works closely with Cabot external affairs specialist Bonnie Morris to match needs with contributors.

Most of the shoppers had received their lists in advance, but Beeman also had more than a handful of last minute requests, which she passed along before shopping on her own for baby supplies and small gifts for the parents like puzzle books, key chains, or an ornament for their tree.

Now in its sixth year, the annual collaboration between Cabot and Interfaith surpassed previous efforts with more than $20,000 in donations. In addition to handling the logistics of the big shopping trip, The Tunkhannock Walmart also increased its contribution to $5,000.
“It’s not about the amount,” said store manager Ricky Zehr. “We are here to support the community during the holiday season, and we’re happy to partner with Interfaith and Cabot.”

“We were thrilled to be invited,” first time shopper Frank Tunis of Northeast Marcellus Aqua Midstream commented. “We’re looking forward to doing more things like this throughout the year. We think it’s important for contractors and vendors to get involved with the community.”
Tunis was working with Jennifer Cathral of TSE Excavating to purchase gifts for two teenage girls. Though Tunis himself has 13 and 17 year-old daughters, he credited Cathral for having a better sense of what girls really want.

“We’re getting gifts knowing that they are going to someone in particular,” said Mel Morris, who was shopping with coworkers Kevin Clark and Paul Hovan of Tioga Environmental Consulting. “We like knowing that what we are getting here stays in the community.”

“It puts a smile on my face. It feels good to do it,” noted Marc Shibley of Kriger Construction.
After the Cabot trailer at Walmart was filled with toys and clothes, the items were taken to the Cabot’s offices to be wrapped and tagged. From there, desRosiers and Morris, in Santa and elf suit, respectively, will guide the gifts to Montrose United Methodist Church Cabot where another group of volunteers will load them into large bags with numbered tags.

When parents arrive on Dec. 19, they can discretely take the presents home.
Interfaith’s distribution method differs from some organizations in that the children usually do not know where the gifts are coming from. According to Beeman, Interfaith believes in giving the families that dignity so that they can provide Christmas for their children.

“It gives people the opportunity to have a real Christmas,” Matt Sheruda of Down to Earth Equipment Rental added.

“There’s nothing better than seeing a smile on a kid’s face at Christmas time,” Tunis stated, “especially when they do not have a lot.”