[Editor Comment: False Alarm is a new book by Bjorn Lomborg that reveals some amazing data about climate, the economy and what is falsely called sustainable development.]

Buy this book, read it and pass it on to your friends (and enemies, too, if you think they will listen to you).  Bjorn Lomborg’s False Alarm is not perfect, but it is great.  If for nothing else (and there are lots of other good reasons to read the book) the price of the book is worth it for this one number: $69,000. 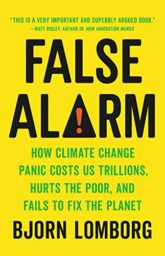 That is how much better off will be the average person in 2100 under a fossil-fuel developed world than under a sustainably developed world.  Lomborg did not make that number up.  He got it from a 2017 report by the IPCC.  That’s right.  A UN climate panel report shows that per capita GDP will be $69,000 higher if we follow a fossil-fuel-development path than with a ‘sustainable-development’ path.  Again, the average person will be $69,000 better off with fossil-fuels even after subtracting damages from global warming.

Lomborg is an environmentalist and former economics professor who, after assigning a class project on the topic, unexpectedly came to the realization that climate change is not the looming catastrophe people have been led to believe.  He thinks it is a problem with solutions—solutions that may cost quite a bit of money—but it is not an existential threat that must be stopped at any cost.

For this apostasy, Lomborg has been excommunicated.  It is similar to what has happened to Roger Pielke, Jr., Richard Tol, and is now happening to Michael Shellenberger.  Agreeing with many or even most of the alarmist positions is never enough.  Anything less than 100 percent fealty to the cause and all its policies brings out the knives.  The personal attacks and efforts to censor have even been directed at Michael Moore for co-producing “Planet of the Humans.”

Some of the chapter titles from False Alarm give hints as to why those proclaiming “the end is near” are upset.  Here are a few: “How Climate Policy Hurts the Poor,” “You Can’t Fix Climate Change,” and “Why Do We Get Climate Change So Wrong?”  The frustration with Lomborg’s reality check must be especially galling because of the extensive citations backing up his claims.  Virtually every paragraph is footnoted and the bibliography alone runs to 53 pages.

The basic themes of False Alarm are similar to the argument that Lomborg has made for years: The available evidence runs counter to the notion that we are seeing more and more extreme weather; projections show an amazingly wonderful future for Earth even with climate change damage; the current climate policies are very ineffective and very expensive; we can use our resources much more efficiently to protect the environment and help the least advantaged.  Spoiler alert: Replacing capitalism with socialism is not the answer.

So why do we get climate change so wrong?  People are more likely to read a story about a car wreck than about a car wash.  A headline like, “Scientists predict next week will be a lot like last week,” is unpromising clickbait.  Lomborg notes, “the media likes to predict impending doom, preferable with a firm date attached.”  This bias for the dramatic bends journalism toward the fantastic.

And so it goes.  The polar bear population was supposedly a canary in the climate coal mine until the data showed that polar-bear populations are much healthier today than they were fifty years ago.  It turns out that hunting was a much greater threat to bears than shifting ice patterns.  So, it is not a story anybody is covering anymore.

The media continually repeat data showing the increasing dollar-value of damages from floods and hurricanes.  They conveniently leave out the increasing damage is not from greater flooding or more hurricanes, but, instead, from the much greater value of buildings and other infrastructure that has been built in the path of these events over the last century.  Weather damage as a percent of GDP has actually declined and the number of deaths from extreme weather has dropped dramatically.

We hear extreme heat can be deadly, but we do not hear cold weather is deadlier.  There are 33 cold-related deaths for every heat-related death.  In what may seem ironic, heat waves are less deadly in hot cities than in cooler ones.  This is good news for a warming planet.  People who are used to the heat adapt better.

An overarching theme of the book is that humans are creative and adaptable.  Further, the wealthier they are the better they are able to adapt and not just to extreme weather but to any adversity.

This brings us to one of Lomborg’s major points.  Climate policies are frequently ineffective and sometimes harmful.  By ignoring the benefits of adaptation in favor of policies to cut CO2, we provide meager benefits with an unconscionable delay and at a cost that reduces the growth that will make future generations resilient in the face of all kinds of problems.

A case in point is the Paris Agreement.  Lomborg devotes a whole chapter to it.  By the year 2030 he estimates the agreement will cost $2 trillion to $3 trillion per year and these annual costs will continue through the end of the century.  Yet, these trillions will moderate world average temperature by a ridiculously small 0.05 degrees Fahrenheit.  Even that tiny temperature impact will not occur until the year 2100.  The intervening years will see an even more trivial cut.  Saddling future generations with a $100 trillion burden whose reward is 0.05-degree moderation in average world temperature is nothing for which the present generation should expect thanks.

Back to that $69,000.  Lomborg has a plan (or a set of plans) to improve on it a bit.  He wants to spend money on science research and on innovation.  He wants to spend money on adaptation, though he does note much adaptation will be done privately and needs no government impetus and certainly not an international agreement.  He thinks it prudent to research (though not employ at this point) geoengineering for emergency use.  He wants the economy to grow.  However, the main part of Lomborg’s plan is a carbon tax.

Assuming that CO2 is a pollutant, the theory of the carbon tax is impeccable.  The reality, however, is messy.  Surprisingly, Lomborg provides the data that undermines his case for a carbon tax.  In Figure 11.3 he lays out the costs of four different carbon-tax policies based on Nobel laureate Willian Nordhaus’s work.  The optimal policy has the temperature increase capped at 6.3 degrees Fahrenheit.  Under that policy target, the costs of climate damage are $87 trillion and the cost of economic damage from the carbon tax is $21 trillion, for a combined cost of $108 trillion.

However, four pages later Lomborg notes the $21 trillion damage from the carbon tax assumes perfect policy implementation and in reality the damage from the tax “could be at least four time the most efficient cost.”  Four times $21 trillion is $84 trillion.  When that is added to the expected $87 trillion of climate damage, the total is $171 trillion.  Since the no-tax policy’s combined damage is less than $150 trillion, a no-carbon-tax policy is better than the “optimal” carbon tax.

This last result goes a long way toward explaining why skeptics are not “deniers.”  We can agree on the basics of climate science but be very skeptical any climate policy coming out of Congress will do less damage to the next century’s economic growth rate than the 0.07 percent the IPCC says will be done by climate change.

Despite this serious policy flaw, False Alarm is a great addition to the climate-change literature.  Lomborg brings reason, data, lots of citations, and indefatigable optimism to the overheated and emotional climate debate.  Get it.  Read it.

Editor’s Note: David Kreutzer is a Senior Economist with IER and the author of this review of False Alarm. Check it out: False Alarm.