Electric power generation from natural gas in Pennsylvania is about to increase from 30% to 45% of the mix in three years, according to a new PUC report.

Believe it or not, dry and sterile reports from government agencies, like the “Electric Power Outlook for Pennsylvania” issued by the state Public Utility Commission, can be exciting! The latest edition of the EPO report predicts natural gas-fired electric generation in PA will go from a current 30% of all electricity produced in the state today, to 45% of all electricity produced in just three years–by 2023. That represents an enormous opportunity for drillers (and landowners) to sell locally produced gas to new, local customers. 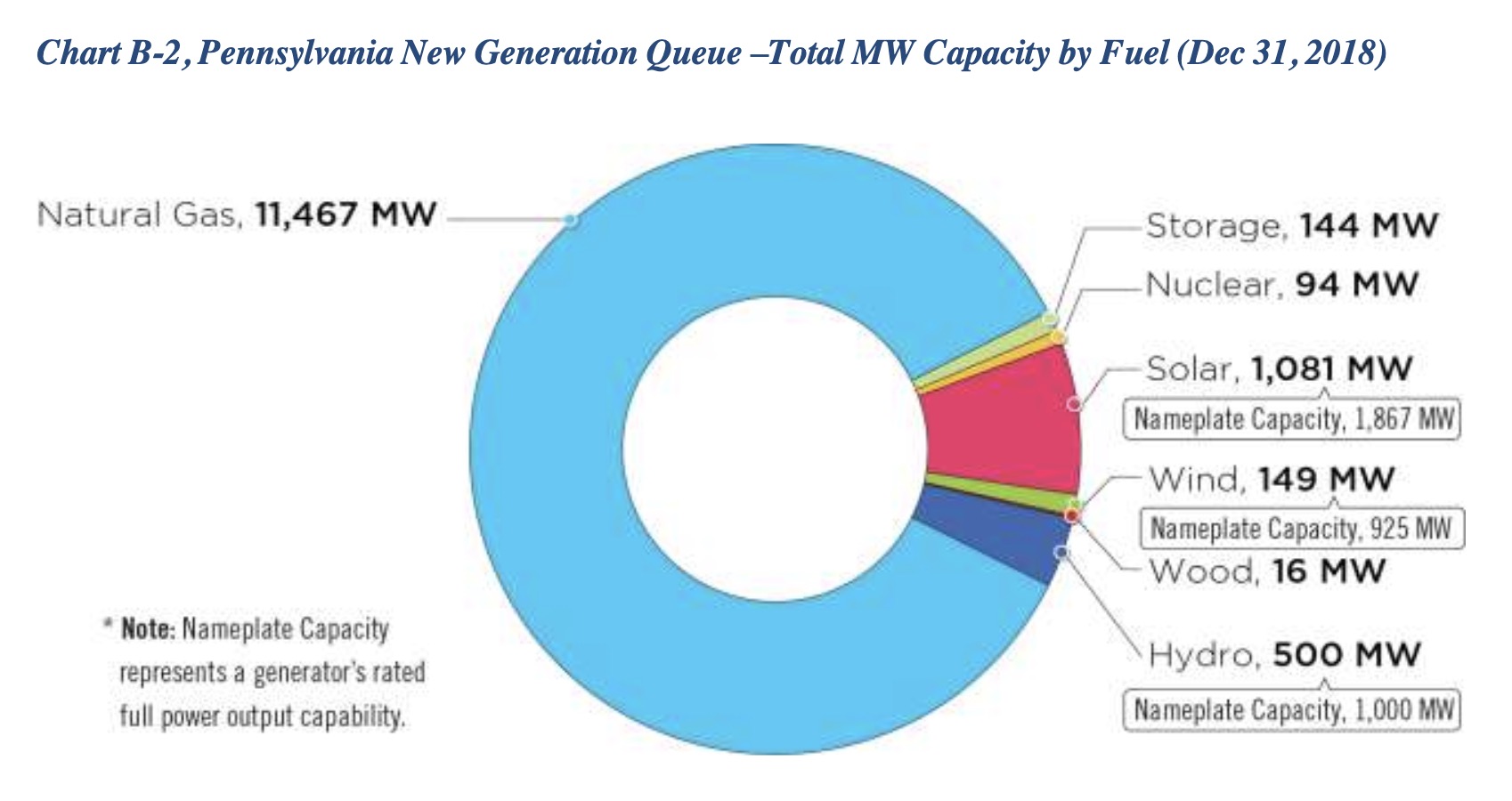 Note the dominance of natural gas in new electric power generation and then realize it’s even more more dominant because solar has but half the capacity factor of natural gas when it comes to actual generation.

Each and every gas-fired electric plant uses a huge amount of natural gas. Increasing gas demand for these plants by another 50% (from 30% to 45% is a 50% increase) is a really big deal.

The Public Utility Commission released its annual assessment of generation, transmission and distribution capacity in Pennsylvania last week which projected a significant increase in natural gas-fired electric generation capacity from 30 percent to as much as 45 percent of capacity by the end of 2022.

The Electric Power Outlook for Pennsylvania 2018-2023 report also concludes regional generation capacity and reserve margins of the mid-Atlantic will be satisfied through 2028, “provided planned generation and transmission projects will be forthcoming in a timely manner.”

The assessment includes the announced retirements of 15 individual units of nuclear, coal, diesel and landfill gas generation facilities made during 2018 (page 48).

Three wind energy projects are considered active with a capacity of 38.5 MW with 8 under construction (85 MW) (page 47) for a total of 149 MW of generation in the que (active and under construction) (page 48).

The PUC forecasts a nearly 1 percent decrease in electric energy use over the next 5 years, with residential use decreasing 1.4 percent and commercial use decreasing 2.15 percent. Industrial use is expected to increase by 0.7 percent (page iii).

The report indicated all electric distribution companies are on their way to meeting their 5-year electric consumption and peak demand reduction requirements under the Act 129 energy efficiency law, but noted final annual reports for Program Year 10 are due to the Commission by November 15, 2019 (page 15).

At the end of the report, beginning on PDF page 57 (labeled page 52 in the report) is a list of the current electric generating facilities in PA. When you scan down the list, the last column is “Technology Type.” In that column when you see Gas Turbine, Combined Cycle and (for the most part) Internal Combustion–those all mean natural gas-fired.

Our point is that no matter how you feel about man-made global warming, natgas-fired plants are clearly the superior form of generating electricity. They generate far more electricity for far less money than any of the alternatives. That’s our takeaway from this report, in addition to the good news that natgas-fired plants in PA are on the increase. Dramatically so.