Last Tuesday a press conference was held in Harrisburg by organizations, individuals and elected officials to discuss the proposed Severance Tax and the negative impacts it would have on businesses and residents across Pennsylvania. More than a hundred folks came out in support and stood on the steps of the Rotunda to represent the thousands of PA employees who couldn’t attend but who have experienced the positive impacts of the Marcellus Shale industry.

The Cabot External Affairs team headed to our state capitol to help share the our own message and to relay the dozens of stories we have heard first hand from our contractors, friends, landowners and community partners. 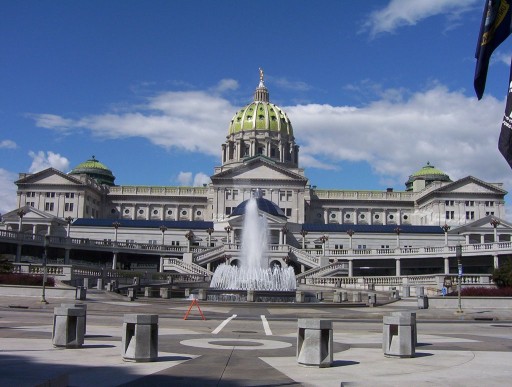 The press conference lasted for roughly an hour and included stories from some amazing individuals who live and work across the Commonwealth on what the industry has meant for them and what a Severance Tax will mean for their future. We will have these videos throughout the week on the @CabotOG Twitter page. Here’s Rep. Mike Turzai:

One of the Governor’s talking points on the need for a Severance Tax has been (again, and again) that the only thing this tax affects is “Big Oil & Gas” – except as we’ve highlighted before with help from our contractors and landowners there is a trickle down effect at work. The proposed Severance Tax which has been estimated to be among the highest in the nation would reduce the spending of companies like Cabot which then results in reduced operations, reduced work and reduced money flowing into the communities where we operate. And it affects the employees of the companies and contractors across the supply chain.

To help highlight this, signs were created for the rally which show that we are all Pennsylvania residents, not the idea of “Big Oil & Gas” and that this tax will impact very really people. 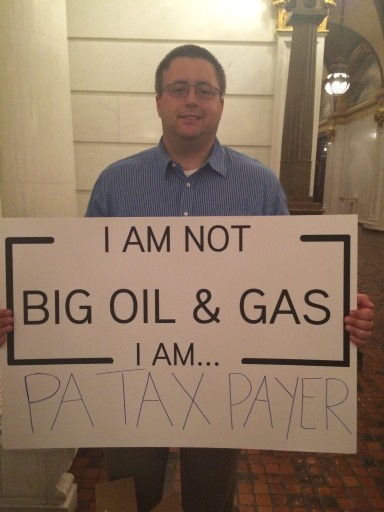 I am not Big Oil & Gas. I am…a PA Tax Payer – Bill desRosiers 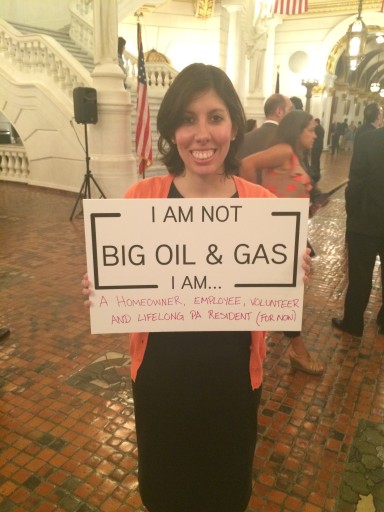 I am not Big Oil & Gas. I am…a homeowner, employee, volunteer and lifelong PA resident (for now) – Brittany Thomas 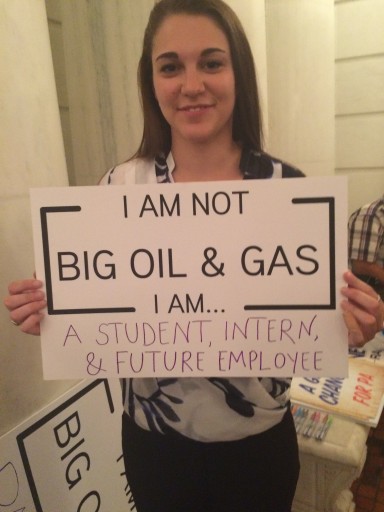 Thanks to the PA State Chamber of Commerce and Industry for a recap of the below stories following the rally.

Republican legislative leaders emerged from closed-door negotiations with the Democratic Wolf administration to announce that the governor’s proposed severance tax on natural gas drillers is a non-negotiable no-go.

“Our counter-proposal was nothing,” said Senate President Pro Tem Joe Scarnati. “Yeah, nothing.”

Wolf adviser John Hanger said the administration offered major concessions on a Marcellus Shale tax: there would be no minimum price on gas, and drillers wouldn’t have someone looking over their shoulder to double-check how much they make off the gas. The governor’s team also offered to guarantee that the state’s existing impact fee levied on drillers would remain, addressing a concern of communities that receive funding from the fee to address the effects of gas extraction and the industry that has sprung up around it.

All proposals were rejected by Republican leaders, said Hanger.

Scarnati: “We are not sending the governor a severance tax”

Speaker of the House Mike Turzai (R-Allegheny) also took part in the discussions and said the current impact fee is working and the issue of getting additional money from natural gas should be left at that.

“Our counter-proposal was nothing. Yeah, nothing,” said Senate President Pro Tem Joe Scarnati moments after he and House Speaker Mike Turzai met with top Wolf administration staff. The governor did not meet with the leaders.

“Zero is not where the people of Pennsylvania are, it’s not where the governor is, we are ready to negotiate a serious severance tax,” said John Hanger, Wolf’s policy director, during a brief press conference with reporters shortly after the meeting.

Despite public opinion polls showing support for a severance tax, the industry and its allies in state government have pushed back against past proposals, sending them over the cliff.

Gov. Tom Wolf met with Republican leaders on Wednesday afternoon to discuss his proposal to implement a severance tax on natural gas drillers to raise more money to fund education.

As Wolf’s Secretary of Policy and Planning John Hanger indicated in the above video, the administration felt the Republicans didn’t take the proposal serious judging by their counterproposal of a tax rate of zero.