The William Penn Foundation has funded, to the tune of $6 million, three groups who are doing politics through legal harassment of the PennEast Pipeline.


Yes, THE Delaware Riverkeeper, who is Maya van Rossum, sent a new/additional letter to FERC, just in case the first letter didn’t get the job done. Miss Maya wants FERC to deny extending PennEast an extra two years to build their pipeline.

As we told you in November, PennEast plans to file an appeal to the U.S. Supreme Court (on Feb. 3) to overcome a lower court ruling that prevents PennEast from using eminent domain in New Jersey for some of the route. Since the original Federal Energy Regulatory Commission (FERC) certificate authorizing construction of the project expires on Jan. 19, 2020, PennEast asked FERC to extend it for another two years.

It is a long shot, to be sure, that the Supremes will actually hear the case. Only 1% of the cases appealed to the high court ever get a hearing. If the Supremes don’t hear the case, it’s somewhat of a pipeline apocalypse–not only for PennEast but for all new pipeline projects in blue states like New York, New Jersey, Washington and others. Last September we explained what will happen in those states if the decision stands.

But, sometimes long shots happen! If van Rossum can get FERC to deny the extension, then if the Supremes hear the case and find in favor of PennEast, the project is still hosed because it has to start all over again with a new FERC filing. That’s Miss Maya’s strategy, according to S&P Global Platts:

Environmental advocates want the Federal Energy Regulatory Commission to reject an in-service delay request by PennEast Pipeline and have asked a federal appeals court to allow it to reopen its challenge of authorization for the project.

Opposition to natural gas infrastructure expansion in the US has been fierce in recent years in part due to concerns about construction impacts on creeks, wetlands, forests and communities, especially for projects tied to the prolific Appalachian Basin producing region in the Northeast.
Market participants were urged at a recent S&P Global Platts industry conference to be more aggressive in their defense of natural gas, due to demand for more pipelines to get production from the wellhead to storage facilities, processing plants and liquefaction terminals to serve growing exports and power and home heating needs… 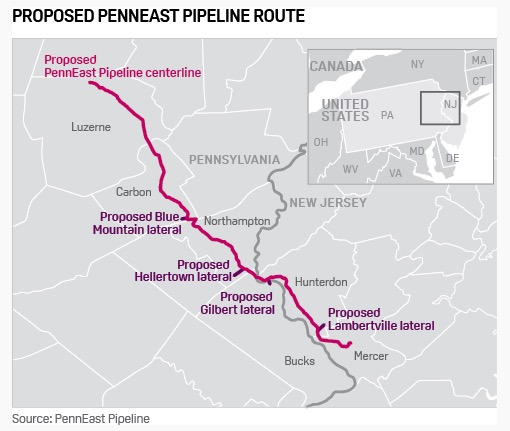 That message is not lost on PennEast, a 1.1 Bcf/d project backed by affiliates of Enbridge, Southern Company, New Jersey Resources, South Jersey Industries and UGI that is designed to boost takeaway capacity from producing areas in northeastern Pennsylvania to downstream markets. The 116-mile pipeline would add capacity into the often-constrained New York City market area.

Issued in 2018, the project’s FERC certificate required the developer to put the pipeline in service by January 19. Two weeks ago the operator asked for a two-year delay to 2022, citing what it said was good cause due to unforeseeable circumstances, such as difficulties in obtaining permits.

In a letter to FERC made available Friday, Delaware Riverkeeper Network, which works on issues that impact the health of waterways in Pennsylvania, New Jersey, Delaware and New York, urged FERC to reject the request and require the developers to submit a new application with what the group described as a viable route and documented environmental and economic data. The letter argued that PennEast has had enough time to address its legal and regulatory challenges…

One of the biggest obstacles faced by PennEast is a decision by the 3rd US Circuit Court of Appeals that not only limited pipeline companies’ ability to use eminent domain to obtain right of way on lands in which a state holds an interest, but also complicated PennEast’s application for a Clean Water Act permit from New Jersey. Based on that court decision, the New Jersey Department of Environmental Protection denied the application.

Editor’s Note: What’s significant here is the unmentioned role of the private tax-exempt William Penn Foundation that is not legally permitted to do any politics but is reveling in it by financing the New Jersey Conservation Foundation, the Watershed Institute, and the Delaware Riverkeeper (a/k/a PovertyKeeper. Here are the amounts donated:

That’s $6,205,077 over the last four years. Although some of it is for worthy and charitable projects, money is fungible and money buys influence. Moreover, it will keep buying it until Congress and the Administration rein in this abuse; this dirty, disgusting diabolical political influence exercised through legal harassment by a gentry ruling class that only cares about itself.