If you live in New York State you can expect more power outages thanks to Gov. Andrew Cuomo’s pandering attempts to curry favor with green energy scammers.

New York’s Con Ed has had two major power outages within a two-week period—and the power outages probably will continue given the state’s new policies that will only destabilize its electric grid further. The state will not allow new natural gas pipelines, which has forced moratoria on new natural gas hook-ups in Westchester County, Brooklyn, Queens, and on Long Island.

Furthermore, the state has approved a climate bill that mandates an 85-percent reduction in all greenhouse gas emissions—from vehicles, manufacturing, agriculture, etc.—and “offsets” for the remaining 15 percent by 2050 from 1990 levels. The legislation also mandates the state to generate 70 percent of its electricity from renewables by 2030 and 100 percent by 2040. In 2018, 26.4 percent of the state’s electricity came from renewable energy, which was less than the 28 percent in 2017. The bill, the Climate and Community Protection Act, establishes a Climate Action Council to ensure that the state meets its targets. 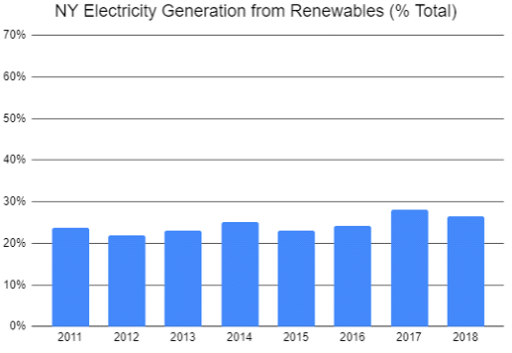 Source: The Empire Center — Note the vast bulk of the renewable energy created by New York State is hydroelectric developed long ago that can’t grow.

An outage on July 13 affected 42 blocks of Manhattan between Fifth Avenue and the Hudson River for five hours. The loss of power interrupted Broadway shows, knocked out traffic signals, disrupted subway service, and stalled more than 400 elevators that were in use. Over 72,000 of the utility’s metered customers had no electricity due to what was determined to be an equipment failure (transformer fire).

On July 22, a second outage hit thousands of customers in parts of Brooklyn due to the summer heatwave. On the previous day, Sunday, July 21, scattered power outages kept over 50,000 customers in the dark throughout parts of the city and Westchester County.

As temperatures spiked, circuits in parts of Brooklyn failed, which meant that Con Ed had to shift some load onto overhead lines that were already delivering power to customers affected by the heatwave. To avoid exceeding the capacity of the lines and possibly damaging equipment, Con Ed switched off electricity starting Sunday evening. Demand on Sunday reached a weekend record of 12,063 megawatts, slightly higher than the company had predicted, but still below the system’s maximum capacity of 13,200 megawatts.

The moratoria on natural gas hook-ups come from the lack of adequate pipeline capacity that results from the state not approving permits. Since 2016, the New York Department of Environmental Conservation has blocked permits for new natural gas pipelines that would increase natural gas supplies to New York. The latest pipeline permit refusal was for the Northeast Supply Enhancement project, a 24-mile pipeline that would deliver about 400 million cubic feet of gas per day from coastal New Jersey to the western end of Long Island. It was the second time the state has blocked the project. This is a deliberate restriction of supplies to consumers.

In response to the ongoing blockade of the pipelines, two of New York’s biggest gas utilities, Consolidated Edison and National Grid, have indicated that they will not provide new gas connections to customers in their service areas in and around New York City. About 800,000 New Yorkers are living in communities subject to gas-hookup moratoria.

Besides heating with natural gas, gas-fired electricity generation in New York has nearly doubled since 2004. As New York is retiring two of its nuclear reactors at Indian Point at the direction of Governor Cuomo, the state will become even more dependent on natural gas for electricity production. Together, these reactors generate about 25 percent of the electricity used in New York City, and do not produce carbon dioxide or criteria pollutants.

Given the New York bill mandates 100 percent renewables by 2040, the state believes that wind and solar will be the answer to its electricity needs. But opposition is looming in upstate New York communities where about 300 megawatts of new wind capacity and 100 megawatts of new solar capacity were halted. According to the American Wind Energy Association, no wind projects are currently under construction in New York.

As a result, Governor Cuomo is looking toward offshore wind. When he signed the Climate and Community Protection Act, he announced the selection of two bids for offshore wind projects, totaling almost 1,700 megawatts—an 880-megawatt project 30 miles off the coast of Long Island and an 816 megawatt project 14 miles from Manhattan that will provide electricity to New York City.

One of the bill’s mandates requires utilities to buy 9,000 megawatts of offshore wind-generated electricity by 2035. That would result in 900 10-megawatt turbines to be constructed off the coast of New York City and Long Island. Offshore wind is expensive. Based on current state estimates for similar projects, the capital costs for these wind turbines will total $48 billion, which the ratepayers will have to pay. If this and other targets are not met for new renewables and energy storage capacity, the Public Service Commission (PSC) will demand that the utilities buy renewable energy credits or pay penalties.

Utilities are also required to fund 6,000 megawatts of solar panels, which is more than 21 times the 281 megawatts of new solar panels for which the state subsidized construction last year. Assuming it takes six acres of panels to generate one megawatt, and that sites will be a maximum of 150 acres, this mandate will necessitate adding at least 56 square miles of solar panels (larger than the city of Buffalo) across 240 sites.

The bill also requires subsidies for 3,000 megawatts of “energy storage capacity” to back-up the intermittent sources (wind and solar) that are not always available to generate electricity.

New Yorkers can look forward to higher electricity prices and future blackouts as its electricity sector is being transformed by the Climate and Community Protection Act, which mandates 100-percent renewable generation by 2040. The state’s residential customers are already paying 44 percent more for electricity than the average U.S. residential price.

The choices the state government is making are clearly not in the best interest of its residents because they will raise prices and make the New York electric system less reliable. The consequences of these actions will not be felt immediately, but they will be real for residential and business consumers when they begin to occur after the next election. New Yorkers have become guinea pigs in an experiment they may very well come to regret.

7 thoughts on “More Power Outages Coming to New York, Thanks to Cuomo”