The Delaware Riverkeeper, the William Penn Foundation’s dirty tricks subsidiary, is hoping to use a New York dirty trick on Pennsylvania Governor Tom Wolf, who undoubtedly welcomes it.

What happens when a pack of wacko anti-drillers stalks a governor and “hounds” him virtually to death on the fracking issue? If he’s a Democrat governor in New York, like Andrew Cuomo, he caves to the pressure just to get rid of the crazies from following him from event to event (see NY Gov Cuomo Comments on Fracking, Hounding by Protesters). And, so we now have an unconstitutional ban on fracking in the Empire State.

That lesson has not been lost on equally crazy anti-drillers in Pennsylvania. Get this: THE Delaware Riverkeeper is going to give lessons on how to stop fracking in the Keystone State by using the same tactic–stalking the governor at every event with anti-drilling messages, hoping to wear him down like the crazies in NY wore down Cuomo. They call it “Bird-Dog” training and starting this Saturday, you too can learn how to be a pompous, pushy %@#, just like THE Delaware Riverkeeper.

Sessions on how to make yourself a pest will be held in Pittsburgh, Philadelphia and Harrisburg. Funny…we thought love and peace and unicorns and butterflies were going to break out when Wolf became governor. Guess not.

Here’s a copy of the Bird-Dog training notice, direct from THE Delaware Riverkeeper website: Lest you think MDN is a little “over the top” with our use of the word stalk, here’s the dictionary definition of stalker:

A person who harasses or persecutes someone with unwanted and obsessive attention.

How is that not exactly what Delaware Riverkeeper is proposing to do with a small army of anti-drillers?

Editor’s Note: Let’s be clear about this; this is the William Penn Foundation going after Governor Tom Wolf with a dirty trick strategy akin to the “sue and settle” tactic where environmental agencies such as the EPA welcome lawsuits from their environmental special interest allies because it’s an opportunity to settle the cases by increasing its own authority and impose controls they could never acquire through the legislative or rule making processes.

The Delaware Riverkeeper would not exist but for the William Penn Foundation, a private foundation using the former as a tool to do political work it is not legally permitted to do itself. When the Delaware Riverkeeper says it’s going to harass Tom Wolf it’s because the William Penn Foundation wants to give Wolf cover for taking fractivist positions.

Yes, make no mistake about it, the William Penn Foundation loves Tom Wolf and that’s why they’ve been successful in placing three associates of another subsidiary, PennFuture, in the Wolf administration. Now, they want to create the image of a demand by the public for the actions they already want to take.

What better way to do it than to use the Delaware Riverkeeper (already adored by a lazy sycophant media for her scrappiness) to go out there and theoretically harass Wolf from the left? Wolf’s folks want this, in other words, just as Cuomo wanted it in New York, where the NRDC gang (with whom the William Penn Foundation is also associated) paid for the dirty work by the useful idiots at work there. It’s a patently obvious political move by the Foundation and its well-placed minions in the Wolf administration.

This is why the William Penn Foundation is such a nefarious organization. It operates from 30,000 feet influencing the levers of government with a combination of carrots, sticks and dirty tricks used by subsidiaries that depend upon it for funding. It should be the subject of a major journalistic investigation, followed by a Department of Justice inquiry, but don’t hold your breath for State Impact, AP or the Philadelphia Inquirer to do its job – they’re in on, too, but that’s a story for another day.

Meanwhile, the Delaware Riverkeeper plans her next set of dirty tricks from these natural gas heated offices in Bristol. We just can’t show this picture enough. Maybe, just maybe, someday some enterprising journalistic without a mission to support these special interests, will ask about it. 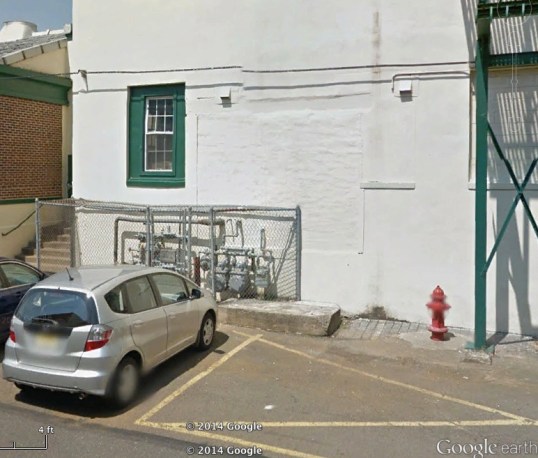 Back of Delaware Riverkeeper offices in Bristol, Pennsylvania