The Marxist CELDF is making yet another run at a “community rights” initiative in Youngstown, Ohio under the cover of fracking opposition. It seeks anarchy.

A nation without laws is not a nation.

Virulent anti-drillers in Youngstown, OH have now tried six times to pass a so-called Community Bill of Rights ballot measure–and have failed all six times, the most recent last November. The local yokels are pawns, useful idiots, for an ultra-radical group from Pennsylvania called the Community Environmental Legal Defense Fund (CELDF). The CELDF is behind dozens of such efforts, none of which has been successful. The CELDF is also behind a number of bizarre lawsuits — like the one claiming that an ecosystem is a “person” with rights. 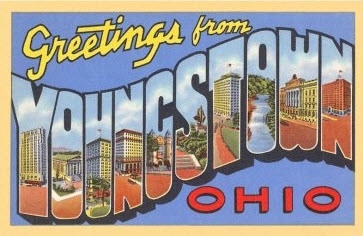 The CELDF has the local anti yokels in Youngstown amped up again — circulating a seventh petition for a ballot measure. But this time is different. In addition to the usual no fracking, no pipelines pablum, this petition has language that makes it legal to break the law.

You read that right. If the ballot measure were to pass, and if an anti got it into her head to sit in front of a bulldozer that was about to clear ground for a wellpad, or dig a trench for a pipeline, the police would not be able to arrest and remove the anti. It would be within her rights to sit there and block legal, legitimate activity–all in the name of saving the planet.

Apparently the brains of the locals are so fried, they don’t realize that if everyone just decides which laws they want to obey or disobey, you soon descend into Lord of the Flies. Mob rule. Anarchy.

Kudos to the Youngstown/Warren Regional Chamber of Commerce for raising the alarm about this latest attempt at anarchy (pay particular attention to the italicized paragraph and re-read it): 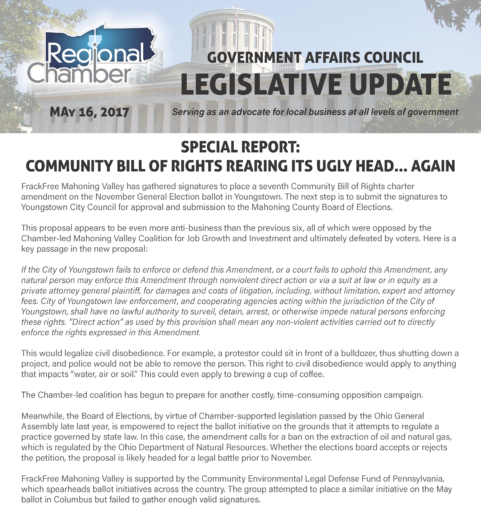 It is no mistake that the most recent version of the Youngstown Community Bill of Rights has language leading to anarchy. After all, the director of the CELDF, Tom Linzey, has advocated for this type of lawlessness. For more on Linzey and the insidious CELDF, see the following two articles:

Editor’s Note: I can’t thank Jim enough for highlighting this matter and calling attention to my articles on the CELDF. He has it exactly right when he says the CELDF is all about creating anarchy; anarchy that would empower these radicals, which is always their ultimate revolutionary goal. Jim is also correct in his kudos to the Chamber for leading the campaign to stop yet another at it by these radicals. 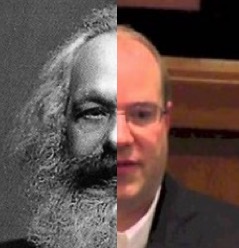 Whether the Chamber fully grasps the threat here, though, is another question. This new CELDF initiative wouldn’t just legalize civil disobedience; it would turn it inside out. The notion of civil disobedience is one of deliberately disobeying an unjust law to prove it’s nature, accepting the penalties associated with such disobedience to show those penalties are a price worth paying for justice. What the CELDF seeks is the opposite. It wants penalty-free disobedience and lawbreaking so it can, via mob rule, overturn the laws of civil society and substitute anarchy that would empower itself. It’s the essence of injustice.

The Chamber has called the CELDF out — bravo — but merely referring to it as “anti-business” or its “ban on the extraction of oil and natural gas” understates the case. Fracking is but an excuse for the CELDF. It wants power to be derived from anarchy. It aims to undermine civil society with a free ride on the backs of dupes who imagine its all about fracking. One must talk plainly about it and call out the group as the Marxists they are if these repeated referendum fiascos are ever to end. Merely trying to educate voters on the business and related implications of “community rights” ordinances is not enough.

Moreover, simply fighting well against every CELDF initiative is not a strategy to win the war. It’s just their strategy in reverse and because they’re the protagonists dug in for a long war, they will always have the ultimate advantage. Tom Linzey knows this. It’s the nature of guerrilla war. What’s needed is an offense. The CELDF needs to be dragged into court and forced to spend money. Its funders (e.g., the Heinz Endowments, the Park Foundation, the Wallace family) need to be publicly identified. Its outrageous tax-exemption needs to be challenged with the IRS, as it has a fundamental purpose of political lobbying. Above all, it needs to be called out as a group of dangerous kooks, not just some “anti-business” organization. This is what it is from their perspective and it needs to be fought that way, not with repeat skirmishes every Spring and Fall election.

3 thoughts on “Youngstown Radicals Make Yet Another Run at Anarchy”