XNG, contrary to fractivists, is good for Upstate. It responds to a business opportunity created by pipeline opposition. Don’t like it? Blame fractivists.

A recent editorial in our local journal, Hometown Oneonta was titled “At Base, XNG Trucks Bring Nothing Positive Here.” Although informative, it was ultimately misleading. It characterized the transport of CNG (compressed natural gas) by trucks on local roads as unproductive in jobs and property taxes, a nuisance at best, and perhaps dangerous. None of this is accurate.

Running on CNG to deliver CNG

Gas trucks traverse Otsego County on the way from Pennsylvania to Manheim, NY. From there the Iroquois Pipeline delivers the gas to New England and downstate New York.

Otsego County held an informational meeting in Milford to address concerns after a tip-over in Hartwick on September 12th. The forum included XNG (the trucking company), the State Police, the County’s Office of Emergency Management, and the DOT. A small, vocal minority in the audience tried to hijack the meeting, targeting primarily the company reps and peppering them with “gotcha” questions.

They didn’t succeed. The State Police reported XNG had no speeding tickets and other violations were “nothing to negligible.”

The County Emergency Services Director noted the training of local emergency personnel and described the science that made explosions of gas trucks highly improbable. The various levels of the truck inspection process were reviewed. The company outlined its extensive safety protocols, from driver training to GPS monitoring. This was met with accusations of greed and lying from a core group frequent flier fractivists.

Accidents happen. By all means, take precautions along the truck route through road maintenance, reduced-speed restrictions, radar-activated MPH signs, and diligent enforcement. A re-routing that almost doubles the mileage and labor costs — not so helpful from a reality-based, cost/benefit perspective.

The editorial noted three XNG accidents. There was one local accident. The other two were elsewhere, not local as the editorial seemed to imply. These incidents were in a universe of over 25,000 round trips. That’s 50,000 point-to-point destinations.

The editorial overlooked the fact 20 to 30 percent of XNG deliveries out of Manhiem are to local and regional businesses and institutions. One such is a Delaware County agribusiness that saves $120,000 a month in energy costs, a considerable savings for a small business that employs local workers. We can expect more of this type of local benefit as natural gas becomes readily available in the future.

The main flaw in the editorial is the omission of the reason the trucks have to off-load in Manheim in the first place. The reason is simple: a lack of inter-connective pipelines. 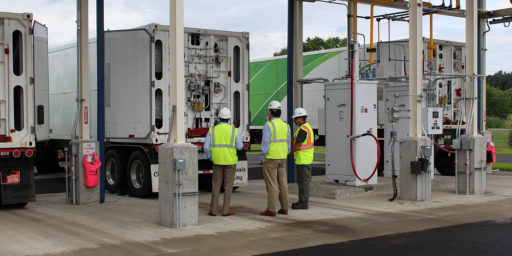 New York and New England need low-cost energy. A source of that energy lies just 60 miles south of Otsego County in the Marcellus shale of Pennsylvania. Pipelines are the logical means of transport from source to end-user but the low cost and flexibility of gas undercuts renewables.

A powerful renewable energy cartel has demonized low-cost gas and mobilized “environmental” groups in opposition. A politically ambitious Governor has joined them in preventing gas from reaching markets. Pipeline construction has been targeted. The result is the people of New York and New England pay more for heat and electricity.

When a Governor blocks energy efficiency for political gain, businesses, public institutions, utilities, and even existing pipelines look for other means (trucks) to save on energy transport costs. Currently, New England imports gas from great distances — Canada, the Gulf Coast states, even has ships it in from Qatar.

Governor Cuomo must stop playing games with his phony, politically-motivated denial of water permits. He must allow more interconnecting pipelines such as the Constitution Pipeline. It’s built to deliver 600,000 dekatherms of gas a day to the Iroquois Pipeline. That replaces a lot of trucks.

The gas truck problem is solved. It’s that simple.

3 thoughts on “XNG Is Positive But If You Don’t Like It, Build A Pipeline!”