Texas got lured into Windy City with the promise of government rent but now it’s paying the price for that city’s energy cruelty.

Texas is a great state. But, it’s not perfect and over the years it got suckered into becoming windy city as the state embraced wind energy and especially the legal graft of government subsidies to support it. According to the EIA, “Texas leads the nation in wind-powered generation and produced about 28% of all the U.S. wind-powered electricity in 2019.” Our late friend from London, Nick Grealy, often wrote about this, accurately noting it couldn’t have taken place without natural gas. Or, subsidies, as it turned out, and the subsidies eventually encouraged windy city to grow too big; to the point not even gas could cover for it when the wind died. 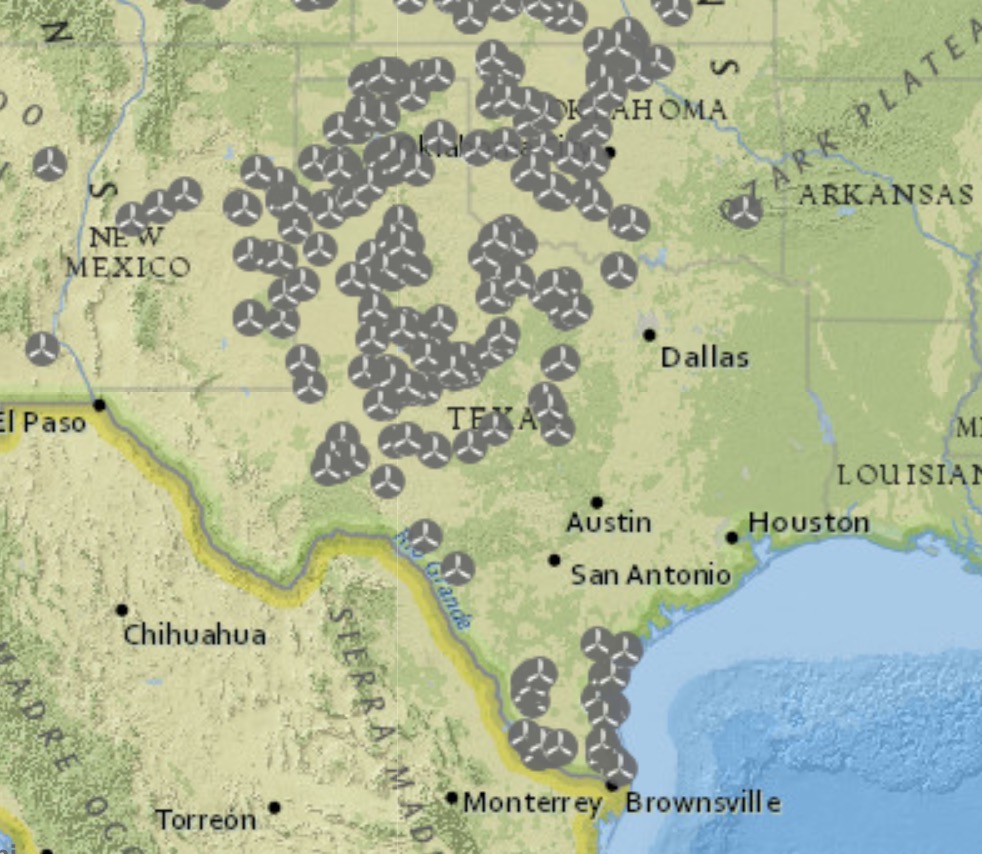 Texas is Windy City—as this EIA map of wind power facilities demonstrates—and it’s a cold heartless place where people are losing their minds this week.

The words from “Windy City,” song by Alison Krauss, come to mind:

We came to you big city, from our little country town
And every step he takes with you, is down
And you’re as cold and heartless, as your chilling winds that blow
Before you freeze his heart, please let him go

Windy City; you’re haunting my baby
With your bright lights and your avenues so wild
Windy City; turn loose of my baby
If you don’t give him back, I’ll lose my mind

Yes, the combination of cold and heartless weather and windy city have put Texas in peril, as ZeroHedge explains:

Wholesale power for delivery Sunday was trading at anywhere from $3,000 to $7,000 a megawatt-hour in some places, triple the records set in some places Saturday and a staggering 2,672% increase from Friday at Texas’s West hub. Average spot power prices were just shy of $1,000 per megawatt hour during peak hours Sunday morning, according to data compiled by Bloomberg…

“Spot prices are expected to hit $9,000 on both Monday and Tuesday,” said Brian Lavertu, a trader for Active Power Investments.

“Power is going to be wild through Tuesday.”

“The cold air is entrenched across the middle part of the country. High temperatures are amazingly cold, some 50 degrees below average.”

And, the situation in Texas doing from bad to worse: Weather forecast models suggest the polar vortex will continue pouring Arctic air into much of the central US through Feb. 20.

As a result of this, Texas power grid operator ERCOT, has issued a statement warning of an “energy emergency” and threatening “rotating outages” just when residents need the power to heat their homes the most:

The Electric Reliability Council of Texas (ERCOT) is asking consumers and businesses to reduce their electricity use as much as possible Sunday, Feb. 14 through Tuesday, Feb. 16.

“We are experiencing record-breaking electric demand due to the extreme cold temperatures that have gripped Texas,” said ERCOT President and CEO Bill Magness.

“At the same time, we are dealing with higher-than-normal generation outages due to frozen wind turbines and limited natural gas supplies available to generating units. We are asking Texans to take some simple, safe steps to lower their energy use during this time.”

This is what happens when you’ve made yourself too dependent on wind energy, the turbines freeze and the demand for natural gas soars, but you’ve been building wind turbines and using gas for backup rather than building enough new gas plants:

Nearly half of Texas’ installed wind power generation capacity has been offline because of frozen wind turbines in West Texas, according to Texas grid operators.

Wind farms across the state generate up to a combined 25,100 megawatts of energy. But unusually moist winter conditions in West Texas brought on by the weekend’s freezing rain and historically low temperatures have iced many of those wind turbines to a halt.

Gas plants, to be fair, have also had issues with the frigid weather, but those problems have been much more isolated and temporary. Windy city, not so much. Windy city will “freeze your heart” and make you “lose your mind,” in fact, as the Washington Post reports:

Millions of households in Texas are suffering rolling power blackouts for the first time in a decade as an unprecedented Arctic freeze wrought chaos in U.S. energy markets.

The largest cities from Houston to San Antonio were without power for spells of up to an hour at a time as supplies in the U.S.’s second largest state fluctuated wildly…

The power crunch is being compounded by a lack of wind generation to help ease the load with output more than halving to 4.2 gigawatts from earlier. Wind turbines may freeze in bitterly cold weather, reducing efficiency and the blades can ultimately stopping spinning.