The evidence is mounting that wind turbines harm marine mammals’ inner ears and sonar organs, disorienting them, causing them to beach themselves and die.

Between January 9 and February 4 this year, 29 sperm whales got stranded and died on English, German and Dutch beaches. Environmentalists and the news media offered multiple explanations – except the most obvious and likely one: offshore wind farms.

Indeed, that area has the world’s biggest concentration of offshore wind turbines, and there is ample evidence that their acoustic pollution can interfere with whale communication and navigation.

However, Britain’s Guardian looked for answers everywhere but in the right place. That’s not surprising, as it tends to support wind energy no matter the cost to people or the environment. After consulting with a marine environmental group, the paper concluded: “The North Sea acts as a trap.… It’s virtually impossible for [whales] to find their way out through the narrow English Channel.”

No, it’s not. These intelligent animals would naturally have found their way to and through the Channel by simply following the coast of England or continental Europe. But the author seems determined to pursue his “explanation,” even when it becomes increasingly illogical. “The [trapped] whales become dehydrated because they obtain their water from squid,” he argues, before acknowledging that “the dead Dutch and German animals were well-fed,” and that the North Sea’s squid population has increased in recent years.

The article discards Royal Navy sonar and explosives, because “big naval exercises in UK waters are unusual in midwinter.” Finally, the author concludes with this quote from his purported expert: “When there’s a mass stranding, it’s always wise to look at possible human effects. But, at the moment, I don’t see anything pointing in that direction.” He should look a bit harder. Not everyone is so blind.

Indeed, “researchers at the University of St. Andrews have found that the noise made by offshore wind farms can interfere with a whale’s sonar, and can in tragic cases see them driven onto beaches where they often die,” a UK Daily Mail article observed.

It is certainly possible that permanent damage to the cetaceans’ middle and inner ears, and thus to their built-in sonar, can result from large air guns used during seismic surveys and from violent bursts of noise associated with pilings being rammed into the rock bed. Wind promoters themselves admit that their pile-driving can be heard up to 50 miles (80 kilometers) underwater, and can be harmful to whales that happen to be nearby. But unless these injuries cause external bleeding, they are very difficult to detect.

Natural phenomena such as seaquakes, underwater volcanic eruptions and meteorites crashing into the oceans have likely been the cause of whale beachings throughout history, by injuring the animals’ inner ears and sonar organs, frightening and disorienting them, and causing them to seek refuge in shallow waters. In more recent years, “military exercises using mid-frequency sonar have been linked quite clearly to the disorientation and death of beaked whales,” says The Guardian. 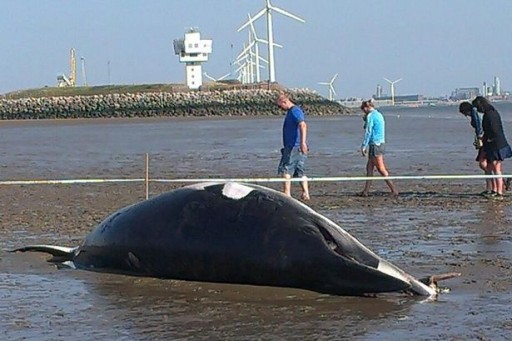 Low frequency sonar can be even more dangerous, the Natural Resource Defense Council asserts. “Some systems operate at more than 235 decibels,” the NRDC has said, “producing sound waves that can travel across tens or even hundreds of miles of ocean. During testing off the California coast, noise from the Navy’s main low-frequency sonar system was detected across the breadth of the northern Pacific Ocean.”

The U.S. Navy itself has recognized the danger that sonar systems represent for marine mammals. As reported in Science magazine: “In a landmark study, the U.S. Navy has concluded that it killed at least six whales in an accident involving common ship-based sonar. The finding, announced late last month by the Navy and the U.S. National Marine Fisheries Service (NMFS), may complicate Navy plans to field a powerful new sonar system designed to detect enemy submarines at long distances,” despite how important that system and its submarine and surface ship counterparts are for national security.

It has been said the “low-frequency active sonar” from this system would be the loudest sound ever put into the seas, The Guardian states. But wind turbines also emit low frequency noise, including dangerous infrasound. At sea, these vibrations are transmitted via the masts to the water, and via the pilings to the rock bed. They can travel up to 31 miles (50 kilometers).

Granted, the acoustic pollution caused by sonar – particularly powerful navy systems – is greater than that from wind turbines. But wind turbine noise and infrasound are nearly constant, last as long as the turbines are in place and come from multiple directions, as in the areas where the whales were recently stranded.

On land, although the wind industry continues to deny any culpability, evidence is mounting that low frequency and particularly infrasound waves emitted by wind turbines have significant adverse effects on local residents, including sleep deprivation, headaches, tachycardia (abnormally rapid heart rates) and a dozen other ailments. Underwater, a milieu where sound waves travel much farther, it would be irresponsible and unscientific to argue that whales are not affected by operating wind turbines, all the more because cetaceans use their sonar to “see” what’s around them

As scientists have pointed out, “It is likely that acoustic masking by anthropogenic sounds is having an increasingly prevalent impact on animals’ access to acoustic information that is essential for communication and other important activities, such as navigation and prey/predator detection.”

“Blinded” by this masking, whales and dolphins could seek refuge in shallow waters, away from big ships and killer whales. There, low tides could surprise them, as large pelagic species have limited experience with tidal flows.

In September 2012, some 19 pilot whales, a minke whale and a large sei whale beached on the coast of Scotland opposite an area where air guns were being used by ships surveying the ocean floor, as a prelude to installing offshore wind farms. “A second pod of 24 pilot whales was spotted in shallow water by Cellardyke around the same time, but [it] returned to sea without beaching,” the article noted.

Offshore turbines were also associated with “many” stillborn baby seals washing up onshore near the UK’s Scroby Sands wind farm in June 2005. “It’s hard not to conclude the wind farm is responsible,” the author concluded.

Many more similar deaths may well have been caused by wind farms at sea. The scientific and environmental literature abounds in warnings about risks to marine mammals from man-made noise. 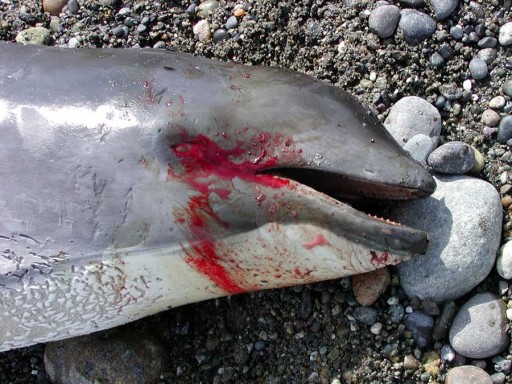 Porpoise with blood in its ears

Modern 8-megawatt offshore turbines are 656 feet (200 meters) above the waves; their rotating blades sweep across a 538-foot (164-meter) diameter. Those enormous blades create powerful pulsating infrasound and exact a toll on many species of marine birds, and even on bats that are attracted to the turbines as far as 9 miles (14 km) offshore.

In a February 2005 letter, the Massachusetts Audubon Society estimated that the proposed Cape Cod wind project alone would kill up to 6,600 marine birds each year, including the roseate tern, which is on the endangered list.

Do we really want to add marine mammals to the slaughter of birds and bats, by expanding this intermittent, harmful, enormously expensive and heavily subsidized energy source in marine habitats?

In addition, having forests of these enormous turbines off our coasts will greatly increase the risk of collisions for surface vessels, especially in storms or dense fog, as well as for submarines. It will also impair radar and sonar detection of hostile ships and low-flying aircraft, including potential terrorists, and make coastal waters more dangerous for Coast Guard helicopters and other rescue operations.

The offshore wind industry makes no sense from an economic, environmental, defense or shipping perspective. To exempt these enormous installations from endangered species and other laws that are applied with a heavy hand to all other industries – and even to the U.S. and Royal Navy – is irresponsible, and even criminal.

Mark Duchamp is president of Save the Eagles International.

Editor’s Note: The obvious alternative for the UK and the rest of the world is inexpensive clean natural gas, which requires no subsidies and dramatically lowers carbon emissions without killing whales. Every energy source, including renewables, have some downsides and it turns out the downsides of off-shore wind are very large compared to natural gas.