Wind power, like many renewables, has been living off subsidies, artificially propped up by others people’s money as natural gas has produced without it.

Wind power’s federal subsidy, the production tax credit, is currently set to be phased out by 2020, at which point wind power will likely give way to solar and natural gas plant additions, which will replace retiring generating plants, mostly coal and nuclear, and satisfy slowly increasing electricity demand, according to EIA’s Annual Energy Outlook. The Energy Information Administration projects that wind additions between 2025 and 2040 will be a paltry 1.2 gigawatts, while solar power additions are expected to total 170 gigawatts and natural gas additions are expected to total 78 gigawatts. The investment tax credit for solar power phases down to a permanent 10 percent for commercial and utility investment in 2022 from 30 percent today.

Due to the production tax credit and state mandates for renewable power, wind power increased its share from 1.5 percent of electricity generation in 2000 to 6.3 percent in 2017. Development is higher in the middle part of the United States, where windy conditions prevail.

The production tax credit (PTC) is a federal incentive for wind energy production that is paid for by the American taxpayer. The U.S. Treasury estimates the PTC will cost taxpayers $40.12 billion from 2018 to 2027, making it the most expensive energy subsidy under current tax law. The base level credit for the PTC is $0.023 per kilowatt hour for wind generation. As part of the phase out, the credit was reduced by 20 percent in 2017, 40 percent in 2018, and will be reduced by 60 percent in 2019. EIA’s forecasts show that the reduction and phase out of the tax credit will have a negative effect on the industry. The credit is very lucrative since units receive the tax credit for 10 years of operation, which could be half of the operating life of the unit. 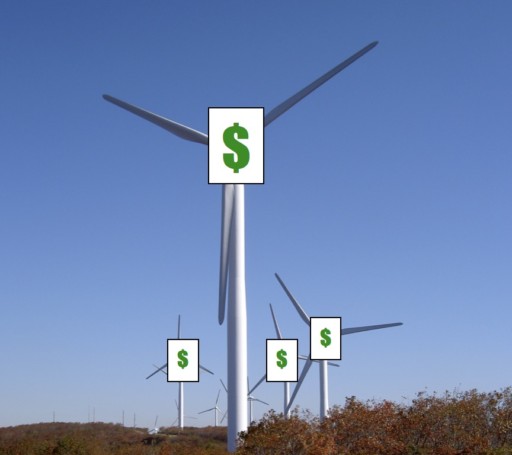 Wind turbines are not expected to last as long as fossil fuel and nuclear generating plants that have been operating in this country for fifty years or even longer, which means they will need to be replaced and their generation re-capitalized at about twice the rate as other generation plants. Solar generation shares this characteristic with wind. This is attractive to the “capital recovery” incentives for regulated utilities which typically allow for charging consumers double-digit returns on newly capitalized projects while disallowing such incentives from plants for which consumers have already paid to build.

Between 2000 and 2017 during the advent of wind additions, average electricity prices in the United States increased by 55 percent. This is not because of fuel costs, which have held relatively steady, and in the case of natural gas, declined significantly. Reasons for the increase are retiring generating units that must be replaced by new capacity, but also the inherently unreliable nature of wind units that require back-up power from natural gas plants, hydroelectric dams, batteries, or some other form of stand-by power, and the additional transmission lines that are needed to get the power from rural areas to main transmission lines.

Because storage is an expensive alternative, currently, conventional plants are needed as backup to supply electricity when intermittent wind units are not producing electricity. Although it is often claimed that wind is replacing conventional generation, it often just reduces the operating duty cycle of the conventional plants. Reducing the operating duty cycle increases the costs of these units by decreasing their efficiency. The backup plants are usually natural gas plants because natural gas plants are more agile than coal and nuclear plants and are able to follow the rapid ups and downs of wind units.

Another issue that will increase electricity prices once the operating life of the wind turbine has ended is the disposal of the materials as waste, with which some countries will soon be confronted (e.g. Germany). There are more than 28,000 onshore wind turbines in Germany and over one-third of these turbines will need to be decommissioned by 2023. The same is true for solar panels, and local governments are only now beginning to come to grips with the rapid scaling of that task.

The renewable energy industry is financed by government subsidies and state mandates that many members of the public are not aware of, leading them to believe that wind turbines cost less than conventional technologies simply because there is no cost to the wind resource. EIA forecasts show that wind additions will essentially sputter to a stand still once the existing subsidies and mandates have expired.

Editor’s Note: Notice solar additions to the power grid are being stepped up before those subsidies get drastically reduced in 2022, at which point the solar industry will also get a dose of hard reality, except in places such as New York where policy is always made on the basis of yesterday’s political correctness. What we see now is the rush of the pigs to the trough for the last meal.