Wind energy is a big part of New York’s Climate Leadership and Community Protection Act (CLCPA) but a look at the numbers says it’s highly unlikely to work.

New York has established energy policy based on conceptions that do not hold up to numerate scrutiny.  This post addresses the idea that New York wind energy can reliably power the electric system and in tandem with solar energy can replace existing generating resources.  In order for the statewide wind energy resource to be considered a reliable source the distribution of wind energy must not include significant periods with low power output. 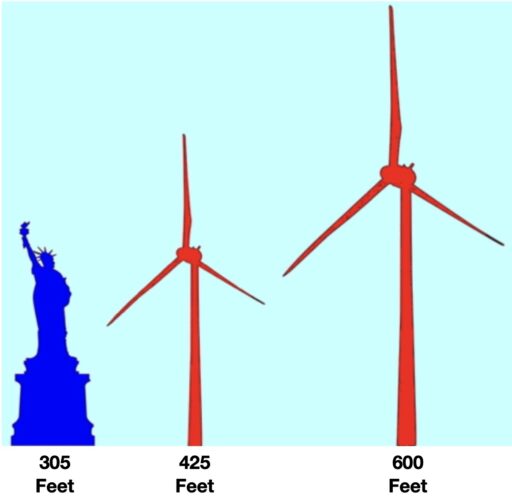 In the summer of 2019 the Governor Cuomo and the New York State Legislature passed the Climate Leadership and Community Protection Act (CLCPA) which was described as the most ambitious and comprehensive climate and clean energy legislation in the country when Cuomo signed the legislation.  The Citizens Budget Commission developed an overview of the CLCPA targets in Green in Perspective: 6 Facts to Help New Yorkers Understand the Climate Leadership and Community Protection Act.

The legislation requires 70% of the generation supplying New York to be renewable in 2030, statewide emissions of greenhouse gas emissions are to be reduced to 60% of 1990 emissions and elimination of fossil-fired electricity production altogether by 2040.  Unfortunately, the politicians that passed this law never bothered to figure out how it could be done.  I have written a series of posts on the feasibility, implications and consequences of this aspect of the law based on evaluation of data.  This post addresses the wind energy resource of New York.

I used two sources of data from New York Independent System Operator (NYISO).  For an overview I used the annual report that presents load and capacity data including historical and forecast seasonal peak demand, energy usage, and existing and proposed generation and transmission facilities.  The Load and Capacity Date Report or Gold Book is a featured report in the NYISO document library.  This post and a summary I posted in April 2019 use data in Table III-2 Existing Generating Facilities from those reports to describe the annual wind energy resources available.  I used the 2019 wind date from the April 2020 Gold book in this analysis.  Note that in 2019 all wind energy came from on-shore facilities.

The NYISO Real-Time Dashboard includes a window for the real-time fuel mix that includes the amount of wind generation being generated in the state.  The window also includes a link to historical data.  I downloaded data from June 2018 through September 2019, sorted out the wind production numbers, and then calculated hourly averages.  I use Statgraphics Centurion software from StatPoint Technologies, Inc. to do my statistical analyses and in this case I loaded the hourly data and calculated frequency distribution statistics.

The New York State Wind Facility Status table lists 2019 wind data from the NYISO 2020 Gold Book for all the New York wind energy facilities.  The NYISO table provides the name plate ratings and 2019 net energy produced.  In 2018 there were 1,982 MW of wind energy nameplate capacity that generated 3,985 GWh of electrical energy for a state-wide annual capacity factor of 24.5%.

Another wind-resource issue is the distribution of the hourly output.  The NYS Hourly Wind Frequency Statistics June 2018 through September 2019 document lists frequency distribution data for sixteen months of operations in New York.  The histogram of wind output categories shows that low output is more frequent than high output.  The frequency tabulation for wind table shows that there were 25 hours when none of the 24 wind facilities in the state produced any power and that 36% of the time less than 200 MW per hour was produced.  The probability plot graphically shows the skewed distribution and the percentiles indicate that half the time hourly wind output is less than 324 MW.

If New York has to rely on renewable energy in the future it is important to know the frequency distribution of wind at night.  I addressed this by simply looking only at four hours either side of midnight.  The NYS Night Hourly Wind Frequency Statistics June 2018 through September 2019 document lists the same statistics for this limited data set.  While there are only a couple of hours with no wind output and the frequency of hours with output less than 200 MW was down to 31% there still is a significant number of hours when the lack of solar and low wind output.  That means that energy storage is going to be absolutely necessary.

Another aspect of concern is the duration of low wind periods.  I used the same data format as the wind frequency statistics but only included 2018 data to determine how long light periods lasted – a critical parameter when it comes time to try to rely on wind energy to provide reliable power.  I calculated the length of time the total NYS wind energy resource failed to exceed various thresholds from 100 MW to 600 MW.

The 2018 Total NYS Wind Energy Light Wind Energy Periodss table lists the longest calm periods for each threshold.  For example, the longest period when less than 100 MW of the state’s total wind capacity of 1,982 MW was 58 hours ending on 9/13/2018 at 1800.  In the second section of the table frequencies are listed.  There were 12 periods when less than 100 MW of wind capacity was available for 24 hours, 5 periods for 36 hours, and one period of 48 hours.

Annual capacity factors average 25%.  All the turbines with capacity factors greater than 30% are using turbines that with tip heights greater than 425 feet.  Although that improves performance it also means that there are greater environmental impacts.  I believe we cannot expect much improvement for future on-shore wind development simply because I assume that the best locations have already been developed.

The distribution of hourly wind output was a mild surprise to me because  I did not think it would be as bad as it is.  Advocates for renewable power maintain that it is possible to address the problem of calm winds at one location by simply adding facilities in other locations so that somewhere the wind will be blowing.  If that were the case using New York resources the hourly distribution would not show that 5% of the time the total wind energy production for the entire state was less than 20 MW.

Furthermore, I suspect that even expanding the location of wind facilities to off-shore New York and adjoining jurisdictions is not going to significantly reduce the number of hours when wind resources are going to have to be supported by significant amounts of energy storage.

The fact that night time wind generation also shows significant hours with low levels exacerbates the need for energy storage.  In an earlier post I estimated how much energy storage would be needed for one example period.  These results reinforce my position that New York State has to do a comprehensive analysis of the availability of renewable resources to determine a strategy for meeting demand with an all-renewable system.  Until that is complete we are only guessing whether the ambitious goals of the CLCPA can be met much less how much this is all going to cost.