Wind energy promoters are facing huge problems. Among them are disposing of its fiberglass blades. But, bigger are the subsidies and the lies about them.

We ran a post two weeks ago about wind energy problems with the disposing of old wind turbine blades. It has, to date, received over 13,400 page views and almost 7,000 Facebook likes. It turns out, though, the article may have understated the problem. A story from Iowa details the difficulties and they are serious. Even more serious, though, is the extent to which the industry has to lie to justify itself. 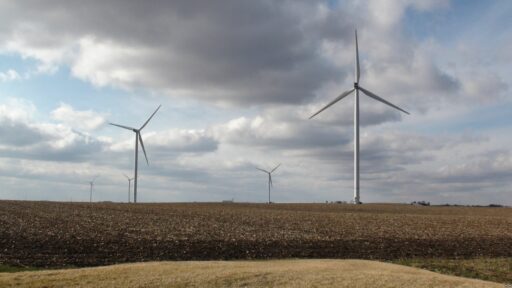 What we learn from the lengthy Associated Press story about Iowa is that getting rid of those old wind energy turbine blades isn’t just finding a landfill with space to take them. There is another layer of difficulty involved as these excerpts illustrate (emphasis added):

“The scale of the issue is quite large,” said Laird, whose group is working to develop new blade materials that will enable reuse. “It’s quite a bit of material. And it’s a larger sustainability issue. We would like everything that’s manufactured to be reusable or recyclable.”

…With older wind farms getting a power face-lift, Iowa landfills are just beginning to accept unwanted blades for disposal.

Landfill operators thought the composite blades, cut in 40-foot or larger sections, could be readily crushed and compacted. “But blades are so strong — because they need to be strong to do their job — they just don’t break,” said Amie Davidson, an Iowa Department of Natural Resources solid waste supervisor.

“Sometimes pieces fly off and damage equipment” in the compacting process, she said. “Landfills are really struggling to manage them, and they just decide they can’t accept them.”

So far, only one facility in north Iowa is taking the blades, while other landfills are assessing whether they will.

Bill Rowland, president of the Iowa Society of Solid Waste Operations, said he’s unsure “we as a society” considered what would happen to the blades as older turbines are repowered.

“One way or another, we have to deal with it as a state. They’ve been promoted. They’ve been built,” he said. “In our opinion, there needs to be a way to handle the waste that’s derived from them.”

…When it started investing in wind, the utility believed a blade recycling option would emerge. “Thus far, it hasn’t,” said Geoff Greenwood, a spokesman for MidAmerican, adding that the company is talking with other wind developers that may be interested in using the blades for their own projects…

DNR’s Davidson said other landfills are discussing whether they can accept the blades. One of the issues that has emerged is who should be responsible for cutting the turbines into smaller pieces, she said.

“We can’t make anybody take a waste,” so it’s up to individual landfills to decide if they will accept blades, she said.

Davidson said she’s unsure whether many recycling options are available. DOE’s Laird said most uses involve cutting up the material and using the pieces in other products. But it’s still unclear whether that’s financially viable over the long term…

The problem with recycling blades, Laird said, is that there is no easy way to separate the materials used to make it.

So, it isn’t easy and no one thought much about it beforehand. Surprise, surprise. Wind energy, like other renewables has been relentlessly and recklessly promoted in animus to fossil fuels without considering it, too, has impacts. Green energy government rent seekers have also been behind the push as the following paragraph indicates:

Consumers will pay none of the wind costs, Greenwood said. In fact, MidAmerican has said the utility will receive about $10 billion in federal production tax credits for the investment, covering the capital costs needed to build the wind farms.

Earlier in the article we’re told MidAmerican Energy, a utility and industrial wind farm developer, “will have spent $11.6 billion on wind from 2004 through this year,” meaning taxpayers have provided roughly 85% of the company “invested” in wind energy if math still means something. Yet, the developer had the unmitigated gall to claim “consumers will pay none of the wind costs,” Worse, the AP accepted this industrial sized lie without a challenge.

Since when are “consumers” not taxpayers? The idea there is a free lunch with wind energy and other renewables is one of the great myths and journalistic monuments to stupidity. Taxpayers are, in this instance, paying through the nose and getting an environmental problem no one knows quite how to address. They’re stuck with the bill and fiberglass that’s anything but sustainable. It can, in fact, be dangerous to cut the stuff up, as this article notes. But, don’t worry; consumers won’t have to pay, just taxpayers.

Such are the falsehoods about wind energy. And, we didn’t even get into the whole intermittency thing and the fact fossil fuels are always required to back it up at all times. It has its place but let’s not pretend it’s green or doesn’t cost us all a whole lot of green.