Wind and solar tax credits are horribly distorting our energy markets and need to be reined in before we end up like Germany with quadrupled electric rates.

The U.S. Treasury estimates that the Production Tax Credit will cost taxpayers $40.12 billion from 2018 to 2027, making it the most expensive energy subsidy under current tax law. These tax credits fundamentally distort markets and strain the grid in ways that are economically unsustainable. Backup costs (i.e. the costs of maintaining backup electricity 24/7 to compensate for wind and solar’s intermittency) are not included in estimations of the cost of wind and solar power, leading to gross underestimation of the costs of these energy sources.

Countries like Germany, Great Britain and Spain have invested in wind and solar power only to have higher residential electricity prices than the United States. If wind and solar truly make sense, the free market will support them without the need for subsidies and mandates.

For decades, Congress has provided lucrative federal tax subsidies to the wind and solar industries in order to establish those industries in the United States. Despite the fact that wind and solar energy now provide 8 percent of the country’s electricity, the 116th Congress is again looking to extend their tax credits.

Not only are taxpayers subsidizing these industries, but American consumers are also paying more for electricity. While fossil fuel prices have been declining and electricity demand has been relatively flat, electricity prices have increased by 56 percent between 2000 and 2018,[1] with the largest increases coming from many of the states that promoted the establishment of wind and solar energy through state subsidies and mandates for their production. It is time for Congress to pay attention to consumers’ pocketbooks and rethink tax credit extensions for these industries. Making more expensive energy choices directly affects household budgets and our international competitiveness.

The history of federal wind tax credits goes back more than 25 years. In 1992, Congress passed The Energy Policy Act that established the Production Tax Credit (PTC) for wind energy, providing a tax credit of 2.3 cents per kilowatt hour[2] of wind energy produced for the next 10 years of the facility’s operation.

The Investment Tax Credit (ITC) for solar energy provides a 30 percent tax credit[3] on the investment of a qualifying solar facility. Meaning, taxpayers literally purchase 30 percent of every solar array on roofs or in industrial solar farms. Because 80 percent of our solar panels originate overseas,[4] U.S. taxpayers are contributing 24 percent of the cost going overseas. It would be akin to taxpayers buying three of every ten gallons of gasoline that consumers purchase, at a time when we were importing 80 percent of our gasoline.

Similar to the PTC, the ITC was amended by The Consolidated Appropriations Act of 2015, which extended the expiration date, but also introduced a step-down in the value of the credit to 26 percent in 2020, 22 percent in 2021, and a permanent 10 percent in 2022 and beyond. In 2022 and to eternity under existing law, taxpayers will buy one in ten of every solar panel installed.

The Energy Information Administration’s Annual Energy Outlook 2019 expects wind and solar generation to reach almost double their current market share by 2025, increasing from 8 percent today to 14 percent by 2025, and supply a combined 23 percent share by 2050.[5] These shares are based on the current phase-down of the tax credits described above. Solar generation growth continues beyond the phase-down of the solar Investment Tax Credit after 2024 because EIA assumes the costs for solar continue to fall faster than for other sources. 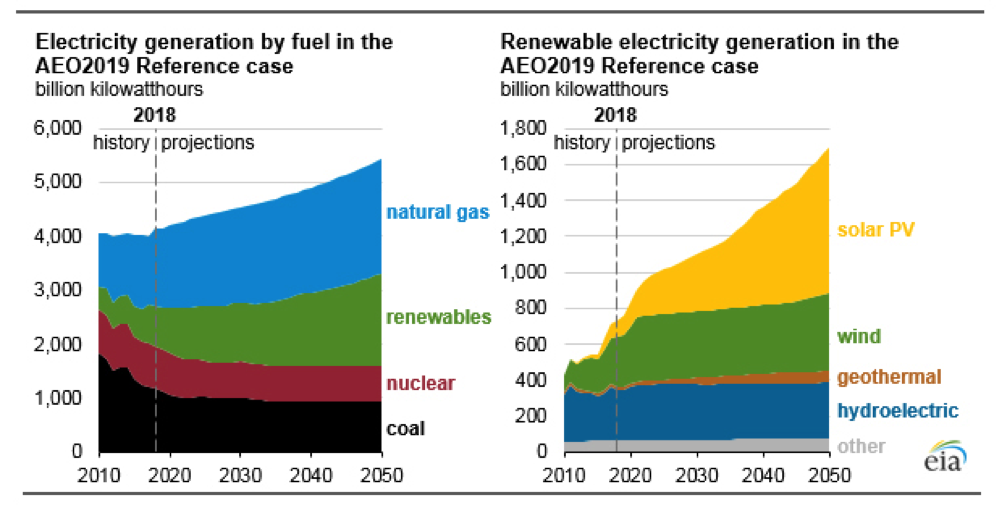 The wind PTC can actually cause wholesale generating prices to drop below zero and compel other technologies to accept those prices. Unlike the stable and predictable price of electricity at the retail level, market prices for wholesale electricity can fluctuate widely throughout the day—usually referred to as on-peak and off-peak prices—and across seasons.

Fundamentally, negative wholesale prices send a distress signal telling markets that the supply and demand balance on the grid is economically unsustainable and suppliers need to reduce their output. But, these market signals do not apply to wind since they are paid by taxpayers to produce electricity whether it is needed or not.

Negative prices generally occur more often in markets with large amounts of nuclear, hydro, and/or wind generation. That is because each of these technologies has an incentive to continue operating even when its facilities are temporarily paying the grid to take their power. Nuclear plants are designed to run at full output and not “ramp” up and down, making them reliable but inflexible. In times of very low demand, nuclear plants will take negative prices rather than go through the long and expensive process of lowering their output. Similarly, hydroelectric plants sometimes take negative prices in power markets because they are forced to run in order to comply with environmental requirements that force them to release water, regardless of whether the electricity is needed.

The purpose of the lucrative tax subsidies for wind and solar energy by federal and state governments is ostensibly to establish these industries and lower their costs, making them competitive with other existing technologies. But, there is a fundamental flaw in this logic in that wind and solar energy are intermittent technologies, generating power only when the wind is blowing and the sun is shining.

As a result, backup power is needed to supply electricity at the touch of a light switch, 24 hours a day, seven days a week. That backup power can take on different forms such as natural gas plants, hydroelectric dams, batteries, or some other form of standby power.[9] But these backup costs are not attached to the cost of wind or solar power that most organizations report, nor are they attributed to the wind or solar producer. This effectively “bends” the grading curve for metrics such as the “levelized cost of electricity.”

Average electricity prices in the United States increased 7 percent[10] from 2009 to 2017 while electricity from solar and wind increased from two to eight percent. During this period, demand for electricity was fairly flat so little new capacity needed to be built. The states of South Dakota, North Dakota, Oklahoma, Kansas, Texas, and Iowa receive about 30 percent or more of their generation from wind and solar power today, but that increase was accompanied by an increase in their electricity prices, as follows:

These increases occurred even as the relative cost of natural gas declined. European countries also have seen increasing electricity prices as they moved into wind and solar energy. Germany’s residential electricity rates have doubled since 2000 due largely to Germany’s Energiewende—a government-mandated transition from nuclear to wind and solar power.

Escalating electricity prices are regressive—poorer people pay a much higher proportion of their incomes heating and cooling their houses than do richer people. As a result, these European countries have experienced an increase in energy poverty, and increasing signs of unrest related to energy pricing, such as the Gilets Jaunes (yellow vests) movement in France.

Fear of climate change and the resulting Paris Accord has prompted countries to invest in wind and solar energy. Countries are heavily subsidizing these technologies, while finding that their investment in them is causing increases in electricity prices, pushing people into energy poverty, and costing government budgets billions in subsidies. While the benefits have been minor at best, the cost has been huge.

A full PDF of this article is available here.

Editor’s Note: These tax credits are nothing but payouts to green rent seeking special interests and, like all such schemes, they distort markets to pay those green rents while also imposing all sorts of additional costs on ratepayers and taxpayers.