Jim Willis notes Willie Nelson has joined the anti-fracking brigade like the good celebrity he is.  Nothing is so predictable as the political correctness of celebrities, but one has to wonder what Willie’s smoking this week as he suggests farmers would be better of without it.

We guess we’ve always known that country music superstar Willie Nelson tilts to the liberal spectrum when it comes to politics (but dang, we like his music!). One of the things Willie has done over the years, to his credit, is promote family farms. He’s raised a boatload of money from his “Farm Aid” concerts to benefit family farms. Unfortunately, Willie has allowed his liberal buddies to convince him that fracking is bad, and now that misinformed philosophy has sadly co-opted the Farm Aid events.

Willie is coming to upstate New York in September for another Farm Aid concert. His message? Buy locally grown/produced food, and ban shale gas drilling. While we like local food as much as anyone, we recommend you give it a pass based on that second comment, but here are the details…

The event in Saratoga Springs, 28 miles north of Albany, will feature Nelson and other Farm Aid board members John Mellencamp, Neil Young and Dave Matthews, as well as other artists to be announced soon. Tickets go on sale to Farm Aid members June 18 and to the general public June 28, the Farm Aid organization announced on Friday.

The concert will be Sept. 21 at the Saratoga Performing Arts Center.

At a stop in Albany on Thursday, Nelson said the Northeast is fertile ground for new farmers and sustainable agriculture. Farm Aid’s mission is to keep family farmers on the land and support the movement toward healthy, locally grown food, he said.

“There’s a whole lot of small family farmers in upstate New York,” Nelson told reporters on his tour bus in Albany before heading south for an appearance at a country music festival at Hunter Mountain in the Catskills. “I think this is a great place to try to reach some family farmers.”

Nelson said he wants to encourage more young farmers to get back on the land and encourage people to feed their families wholesome food from farms closer to their homes. “More and more people are asking about where their breakfast comes from, why it comes from 1,500 miles away when there’s a farm next door,” Nelson said. “A lot of people are thinking about what we’re feeding our kids. Young people are trying to stay healthy, wondering who’s watching out for our food supply.”

In New York, there’s a heated debate in farm country over shale gas development, which currently is under a moratorium while state officials complete an environmental and health review. Some farmers see gas leases as a solution to their financial struggles, while others oppose gas drilling for fear of accidents causing water and air pollution.

“If farmers could make a good enough living farming, they wouldn’t feel pressured to lease their land for drilling,” said Cara Fraver, an organic farmer from Easton in Washington County who spoke to reporters on Nelson’s bus.

“We need to guarantee farmers a living wage for what they do,” Nelson said.

Farm Aid, which has been held almost every year since 1985, provides concert-goers with a Homegrown Village that features local farmers and foods as well as educational activities related to the Good Food Movement, which promotes humane, organic, sustainable agriculture.

The organization has raised more than $43 million since 1985 to support programs that help small family farms, expand the Good Food Movement and promote locally grown food. Farm Aid has made grants of more than $2.5 million in the Northeast during the past 28 years, according to the organization.*

“Bad for the soil,” eh Willie? That single comment shows he doesn’t have a clue how fracking and drilling works. 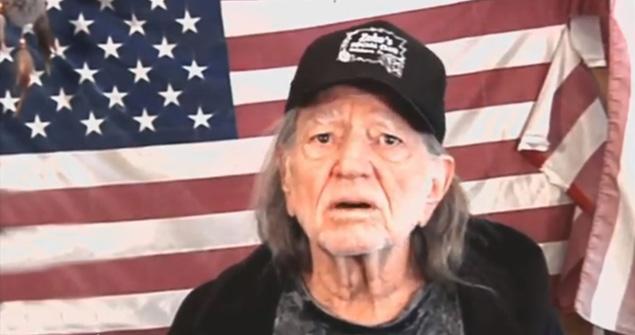 8 thoughts on “Willie Nelson & Farm Aid Go Anti-Drilling – Is He Smoking Something Again?”