The William Penn Foundation, as a private foundation, is legally prohibited from any lobbying, but it seems to be laying groundwork for a DRBC fracking ban.

There’s something especially rotten going in the Denmark known as the Delaware River Basin. It’s being orchestrated by the William Penn Foundation, which is a private Haas family foundation not legally permitted to do any lobbying whatsoever, but which also has made a standard practice of doing it through surrogates.

These shill outfits, hopelessly indebted to the Foundation for funding, include not only the Delaware Riverkeeper, but also the American Littoral Society from which it was originally spun off. Likewise, just as StateImpactPa serves as a propaganda arm of the Foundation in Pennsylvania, NJ Spotlight plays a similar role in New Jersey, both part of the same echo chamber. Finally, there is the Academy of Natural Sciences where Carol Collier was given a cushy retirement slot after doing the Foundation’s bidding at the DRBC.

These entities, plus another known as the Partnership for the Delaware Estuary, are all involved in a very suspicious panel discussion planned for next Friday at Camden Community College that looks an effort to build a foundation for a DRBC fracking ban.

The first thing suspicious about this panel is that not only is the William Penn Foundation the sponsor, but every involved party is paid handsomely by the Haas family behind the Foundation to heed its direction. Here’s who’s involved: 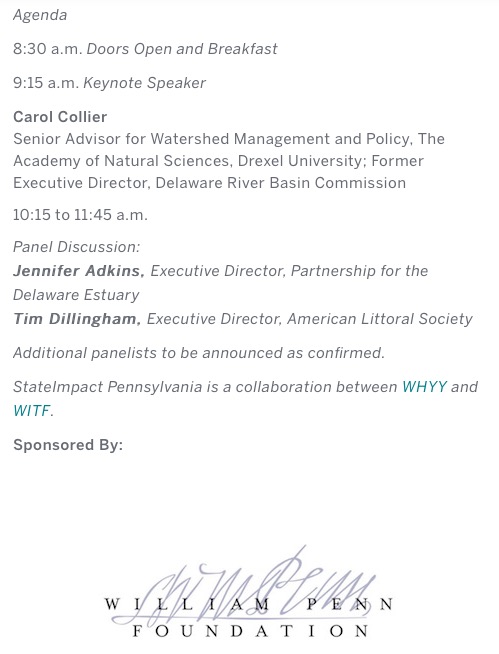 Here’s how much the William Penn Foundation has provided in funding for everyone and it’s by no means an exhaustive list as it only includes recent grants and those that could be specifically attached to these organizations): 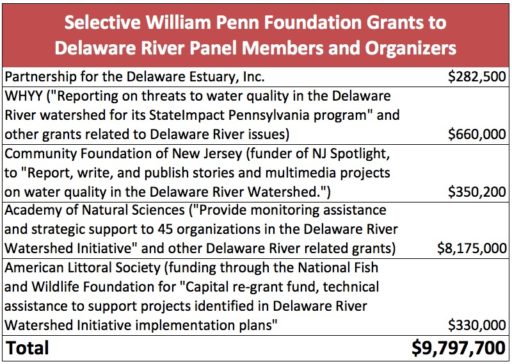 The data shows, without even beginning to account for everything, that the William Penn Foundation has invested over $10 million in just these few entities with the obvious purpose of frustrating as much growth as it can—in grants intended to advocate against such things as gas drilling and fracking in the watershed. Then, there is the money pushed out to the Delaware Riverkeeper, the Clean Air Council, Penn Future and myriad other groups to do the same thing, as well as the Delaware River Basin Commission (DRBC) itself when Carol Collier sold the agency’s soul to the Foundation even as the latter sued the DRBC through the Riverkeeper a/k/a Povertykeeper. And, this doesn’t account for relationships with the Rockefeller agents such as the Open Space Institute and other members of the NRDC gang.

The William Penn Foundation is, more or less, a full-time mega-funded political organization seeking to do anything and everything it can to stop development in the region using others to do its dirty work as it just keeping shoveling the money at them. This panel discussion coming up next Friday is just one more manifestation of this strategy,  but there’s something different this time. The mission is stated as follows:

“As the region faces stress from pollution [and] overuse…questions abound on both the quantity and quality of the area’s water supplies [and] our panel of experts will…take a closer look at both how and if state governments and policymakers should respond to growing challenges in managing these resources.”

Stress from pollution? Overuse? Growing challenges in managing these resources? We might dismiss this as the typical babble and exaggeration that comes of the mouth of fractivist-type groups. But, everything must be examined in context and we know the  Povertykeeper and friends have launched a phony petition drive for a permanent fracking ban. Moreover, there are rumors coming from several directions that the DRBC, at the behest of Pennsylvania Governor Tom Wolf, who once told Upper Delaware residents he’d help them get the DRBC to allow fracking if they helped him get a severance tax, is considering such a ban. No less than four individuals with knowledge of the background have so indicated in the last three weeks.

Most revealing, though, is the choice of keynote speaker Carol Collier, former DRBC Executive Director, one-time designated member of the board of the William Penn Foundation and now its DRBC leader in exile at the Academy of Natural Sciences. The Academy is a once respected outfit (much like the DRBC before her) that she is now already politicizing and taking down an ideological road.

Yes, Carol Collier is back, having come up out of the depths of the Delaware to torment the innocent men, women and children of the Upper Delaware with a message, no doubt, that they must sacrifice themselves and their livelihoods for the greater good of environmental purity as defined by lower basin ideologues and the elitist Haas family and friends. And, their mere assertion of pollution stress is the only evidence required.

This brings us back to the future. Will Carol Collier solemnly announce she’s now changed her mind and decided a ban is required after all; that her previous phony efforts to produce drilling regulations while dancing with the William Penn Foundation that immediately hired her after leaving the DRBC were mistaken? I suspect so. She’ll pay back the William Penn Foundation with an impassioned mea culpa and plea to enact a ban. StateImpactPA and NJ Spotlight will be there to ensure the message is echoed throughout the media and halls of Pennsylvania and New Jersey legislative buildings. Philly.com will be there as well, I expect, also being in the Haas orbit. That’s how the fractivist echo chamber works.

Will the DRBC Commissioners cooperate in this sham enterprise? I would not be surprised, but they’re going to have a very difficult time defending their decision in court and especially in a massive takings claim somewhere down the line, which would be the clear direction into which landowners would ultimately be forced.

Why would they have such a difficult time? Well, as we’ve noted here before, the voting majority members of the DRBC — Pennsylvania, New York and the Army Corps of Engineers representatives — are also the voting majority of the Susquehanna River Basin Commission or SRBC where drilling and fracking have been taking place since the beginning of the Marcellus Shale revolution. This is hugely significant because the track record in the SRBC region shows water quality is not declining but often improving, as we noted here. This fact speaks for itself and, there’s this from the SRBC:

The Susquehanna River Basin provides drinking water for about 4.1 million basin residents in New York, Pennsylvania and Maryland. In addition, more than 15 million gallons per day are diverted out of the basin to supply public drinking water to another 2 million people outside of the basin, including substantial diversions to support the City of Baltimore, Md., and Chester County, Pa.

The City of Harrisburg, Pennsylvania’s capital also gets its water from the Susquehanna, so, if the Governor’s own glass of water isn’t threatened by fracking he allows on the one hand, how is he going to credibly claim it’s a threat to the water he says he wants to protect on the other?

It’s simply not a tenable position, which leaves me to wonder if they’ll really try this in the end. There’s no doubt what the William Penn Foundation wants, though. I fully expect to use this upcoming panel discussion as the basis to launch a more formal campaign for a ban using its surrogates and the echo chamber at its disposal, all bought with the inheritance of the Haas chemical fortune. How ironic and, yet, so typical of the trust-funder set.

6 thoughts on “Is the William Penn Foundation Planning a DRBC Ban?”