The William Penn Foundation was created by the Haas family of Rohm & Haas, which became part of the DowDupont conglomerate and left a chemical trail.

No group has done more to undermine the welfare of Delaware River basin landowners and those who have to make a living in the upper basin, than the William Penn Foundation. It has been the single biggest enabler of the odious Delaware Povertykeeper operation. It funded the phony research that allowed the DRBC to pretend it was working on gas drilling regulations when it was sitting on them. It throws money at the Clean Air Council and any number of other extremist groups intent on stopping gas drilling, pipelines and other economic progress. It partners with the Rockefellers to do land grabs. But, there’s another environmental legacy, too, regarding the founders of the William Penn Foundation. 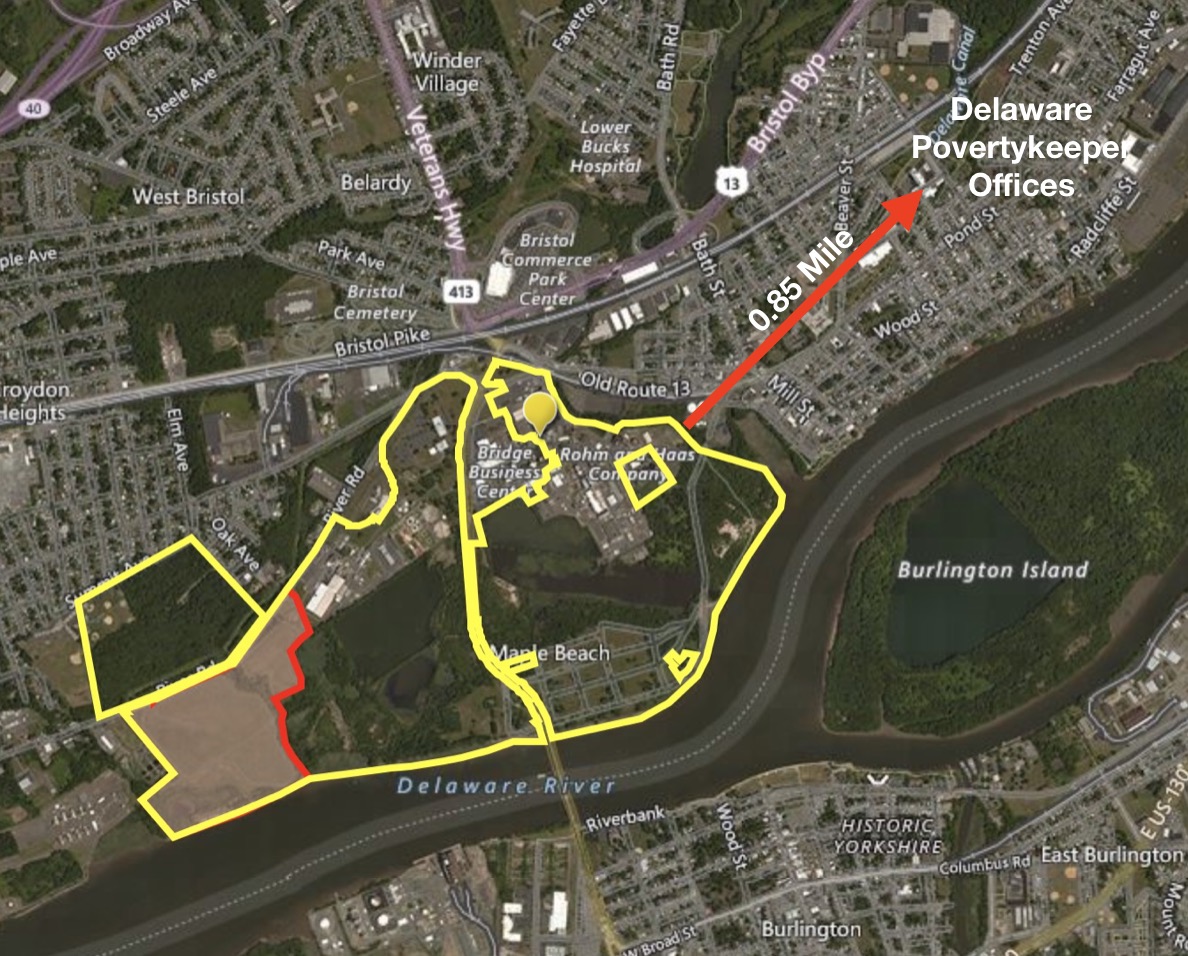 The William Penn Foundation environmental spending, in fact, is little more than an attempt by its Haas family founders to greenwash a highly questionable environmental record in the chemical business. I wrote about that record last year. I included the above map of the Rohm & Haas hazardous waste remediation site in Bristol, Pennsylvania, less than mile from the gas-heated Delaware Povertykeeper offices they now finance. But, there’s more, as it turns out.

Rohm & Haas, the company that created the Haas family fortune now being spent by the William Penn Foundation, is a chemical company that was sold to Dow Chemical for $15 billion in 2009. Haas family trusts owned roughly a third of the outstanding stock and supported the merger deal. They also demanded the Rohm & Haas name be preserved within the Dow empire, which is now the DowDupont empire.

This is where things get interesting. Frank Brill, over at EnviroPolitics, picked up on this Bloomberg story about New Jersey ordering companies to address PFAS contamination. PFAS refers to “a related family of thousands of ubiquitous synthetic fluorinated organic chemicals known for their nonstick and water-repellant qualities, collectively called per- and poly-fluoroalkyl substances.” New Jersey is apparently on a tear over PFAS contamination, according to Bloomberg (emphasis added):

The chemicals have appeared in drinking water supplies across the country, spurring new federal legislation, state regulations and orders including New Jersey’s.

New Jersey also requested the companies set up a fund for investigating and remediating PFAS across the state, but the companies have refused, according to documents obtained by Bloomberg Environment May 9 through a state public information request.

The validity of these charges and demands is unclear at this point but the inclusion of DowDupont on the list for its supposed past sins caught my eye. A little research reveals that Dow almost immediately wanted out of part of the Rohm & Haas business after its acquisition of the company. That was the powder coatings division, which was apparently acquired by AkzoNobel the next year.

Why did Dow want out of the powder coatings business? Well, powder coatings are PFAS products. And, now it turns out the EPA and New Jersey are both coming down with regulations and demands regarding those products. Ironic isn’t it? The Haas family behind the William Penn Foundation is financing rabid opposition to natural gas drilling in the DRBC region, which has no discernible impact on water quality in the sister SRBC. Yet, DRBC member New Jersey and the EPA tell us it is what Rohm & Haas was doing that has polluted water.

Just amazing isn’t it? And, it’s nothing new as this Federal Register notice from 1985 indicates:

The Rohm and Haas Co. Landfill covers approximately 60 acres adjacent to the Delaware River just south of Croydon in Bristol Township, Bucks County, Pennsylvania. During 1952-75, the landfill received wastes from the company’s chemical manufacturing plants in Bristol Township and Croydon. Rohm and Haas reports that it disposed of 309,000 tons of wastes in the landfill, of which 4,600 tons were considered hazardous. The Bristol Township Sewage Treatment Plant and Chemical Leaman Tank Lines, Inc., now occupy the northwest corner of the filled area.
In 1980, EPA detected contaminants in on-site ground water and surface water. Rohm and Haas is conducting a comprehensive study of environmental conditions in and near the landfill. The company reported the first results in April 1984. The investigation revealed that ground water, surface water, and soil within the landfill are contaminated. Among contaminants detected on-site are benzene, bis(2-chloroethyl)ether, trichloroethylene, toluene, xylene, chlorobenzene, tetrachloroethylene, various polycyclic aromatic hydrocarbons, and several pesticides.

Although a fence exists around the site, parts of the site are accessible, so that people and animals can come into direct contact with contaminated soil. Bristol Borough, Pennsylvania, and Burlington City, New Jersey, have public water supply intakes on the Delaware River within 3 miles upstream of the landfill. The water systems serve approximately 18,000 people. The river is tidally influenced in this area.

Get that? The William Penn Foundation cash used to fight against our rights as Upper Delaware landowners comes from a family firm that threw benzene, toulene, xylene and several pesticides into a landfill directly adjacent to the river less than a mile from the offices of the Delaware Povertykeeper and three miles from the water intakes of Bristol, Pennsylvania and Burlington, New Jersey. If New Jersey wants to go after the real polluter of its water and its politics it should be demanding the William Penn Foundation set up a fund for remediating Rohm & Haas pollution.