The Shale Gas Revolution just keeps spreading and it’s having a tumultuous impact on our economy, our politics and the future position of our nation on the global stage.

2013 was the year that the shale revolution truly was felt worldwide.  Countries in OPEC, Russia and other historic energy producers began to internalize the fact that the energy market fundamentally changed, and international power relationships along with it.  For better or worse, Saudi Arabia is no longer indispensable to the United States, with bilateral relations at the end of 2013 being far more acrimonious than harmonious.  Russia went to great lengths to force Ukraine to abandon plans to further integrate West instead of East, clearly alarmed that efforts by Ukraine, Poland and other European countries to develop their shale resources will lessen Russia’s energy control over Europe – East and West.

China continued to develop its world’s-largest shale resources, but cronyism, lack of infrastructure and geography are hampering that development.  The Middle East could be reshaped as much by the extraction from the Leviathan Basin in the Mediterranean between Israel, Cyprus and Lebanon as by the continued fallout from the “Arab Street.”  Great Britain and Australia are moving forward with their programs, despite local opposition. 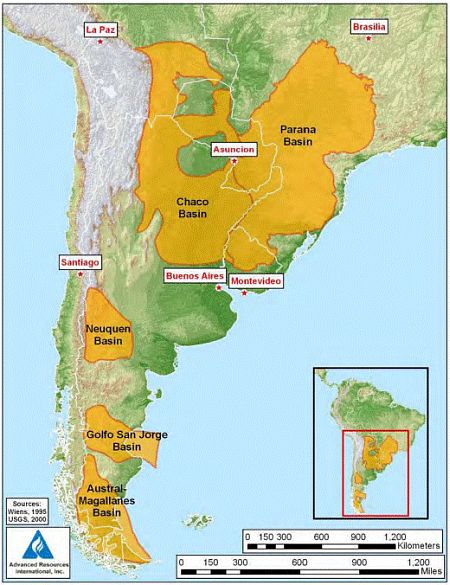 But, it may be Argentina, home to arguably the fourth-largest shale gas reserves, that it moving most briskly (see shale play map of Argentina above).  The Argentine government reached joint venture agreements with Chevron, Dow Chemical and Gas y Petroleo.  It also structured an agreement with Spanish concern Repsol for Repsol’s 51% interest in Argentine oil company YPF, which the Argentine government nationalized in April, 2012.

It was also a year in which Colorado, Ohio and New York took up the issue of whether municipalities could totally ban shale drilling within its borders, and the Pennsylvania Supreme Court struck down provisions of Pennsylvania’s Act 13 amendments to its Oil and Gas Law that stripped local governments of any rights regarding zoning and land use as it related to unconventional drilling.

The Pennsylvania decision was striking less for the conclusion it reached than for the blanket statement that unconventional mineral extraction clearly would be detrimental to the environment. Expect Chief Justice Ron Castille’s language to be cited in dozens of briefs to be filed in cases seeking to limit or ban hydraulic fracturing around the nation.

2013 saw the first large-scale realization that the United States was entering uncharted territory as a world energy producer.  Organizations such as the International Energy Agency claimed that in just a few years this country would become the largest oil producer in the world.  With that, we entered into a debate as to whether or not we should approve large scale export of oil and natural gas.

For the first time, the Obama Administration gave approval for export of natural gas obtained by hydraulic fracturing. It also used natural gas and oil production as an example of an improving economy, despite the fact that the administration has been remarkably ambivalent toward the whole issue.

As we head into 2014, keep your eye on the periphery.  States like Maryland, Tennessee, Georgia and even New Jersey have begun to wrestle with shale gas issues. As the technology improves, the ability to extract gas and oil economically from previously unimaginable sources will grow, causing parts of the country and the world that never before dealt with these issues to face them. Their  legal systems will be under-developed and their infrastructure will need to be created, but of this you can be sure – like Williston, North Dakota and Montrose, Pennsylvania, their economy and way of life will be transformed.