Rep. Jesse White, the guy who likes to pretend he’s a teenage girl on the internet to attack his constituents, enemies in his own political party and Range Resources, was one for three in this year’s elections, but wasn’t on the ballot, which tells us something.

McDonald, Pennsylvania, where I live, is in Washington County, in the southwest corner of Pennsylvania, which is in the heart of the Marcellus Shale gas area. Unfortunately, despite all the gas drilling for gas going on around us, which is producing tremendous economic benefits, two townships, Cecil and Robinson, are at a stand still. The reason, as I stated in a previous post, is simple. It’s politics of the worst sort: Jesse White politics.

This area has a history of using our natural resources. This area of southwestern Pennsylvania has a long history of natural resource production; coal as well as gas and oil. McDonald Borough was the hub of a 13,000-acre oil field that in 1891 and 1892 gushed the highest levels of oil in the world, long before modern heath and safety regulations were in effect and the area not only survived, but prospered. That’s why I support safe and responsible gas drilling today. I want clean air and water as much as the anti-drillers do, but I see where the industry is trying to work with people and their concerns and there is too much prosperity at stake not to do so. 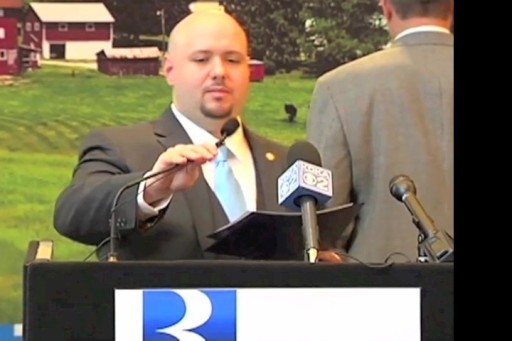 Jesse White – Before Range Resources Turned Down His Superbowl Demand

I have attended several Board of Supervisors meetings in my neighboring community of Robinson Township in support of gas drilling, trying to understand why some of its citizens seemed to be so upset over it. That township is a largely rural one with many acres of farm land and it seemed only logical most residents would be in support of natural gas development, yet township officials were fighting it every step of the way.

The people finally spoke at the last election and replaced two of the three supervisors. The new Board of Supervisors will take over in January, but before leaving office the old board is apparently trying to make several changes that would lock in their anti-development policies. The citizens spoke loud and clear at the November meeting on the 18th wanting to know why their was such a rush. You have to ask yourself why, in the face of this opposition and the results of the election, are these individuals so determined to make it harder to drill when they will no longer be on the board?  Lame-duck policies of this sort are fundamentally anti-democratic.

Cecil Township, has five Supervisors but only had one seat up for election and, in this case, the voters went for the anti-drilling candidate with a big push from another Supervisor, Andy Schrader, and his bosom buddy, Rep. Jesse White.  It’s highly unusual, in other parts of the state, at least, for state officials to involve themselves in local elections but Jesse endorsed the newly elected Supervisor by stating in her campaign flyer “this is the one I want to work with.” While the people obviously spoke here as well, Cecil’s board will now have two Supervisors who have been trying to work with the industry and open up a dialogue, two anti-drillers opposed to any cooperation with the industry and a fifth Supervisor whose votes are erratic in nature, depending on which way the wind blows.

This is unfortunate because Cecil Township recently tried to open up a dialogue with Range Resources, one of the major drilling companies in the area and scheduled a meeting with the company to resolve some issues. Only three out of the five Supervisors attended. This is what our State Representative posted on his Facebook page (incredibly, he still has one) prior to that meeting, involving himself in a strictly local matter and using it to create a political controversy that he hoped would (and which apparently did) impact the election:

They’re seriously going to have ANOTHER illegal secret meeting with Range? How are we even debating the merits of whether this is a good idea or not? This violates both the letter and the spirit of the Sunshine Law, plain and simple. It’s l…ike a friend telling you they want to drive home drunk, and the only objection you raise is what route they want to take; the point is they shouldn’t be driving in the first place. If Range Resources wants to talk about problems at the Worstell Impoundment / Transfer Station, they should come into a public meeting like any other company doing business in the township- what makes them so special that they get to have illegal meetings with elected officials? Now, instead of talking about the facts of the problem, we have elected officials squabbling about what was or wasn’t said behind closed doors. Meanwhile, the ringleaders of this whole disaster, Elizabeth Cowden and Range Resources, sit back and laugh because this is exactly what they wanted. Please SHARE and GET INVOLVED if you’re tired of this garbage.

Supervisor Andy Schrader, the Jesse White ally, said he wasn’t invited and he even went so far as to contact the District Attorney’s office, but was later proven wrong by emails released by the Chairman of the Supervisors.  This is the sort of politics I talked about earlier.  What kind of a State Representative engages in this kind of banter in social media?  Well, obviously the same type that pretends he’s a teenage girl to take cheap shots at Range Resources, who, it appears, he’s never forgiven for not getting him that trip to the Superbowl. And, why did Schrader pretend not to receive what he clearly did?  What is it with these two great pretenders?

The controversy in both Cecil and Robinson Townships has been driven by one man and his friends. Representative Jesse White, who says he is for responsible drilling, but instead plays on the fear of people and tells only half of the story at any given time, the half that promotes his angry agenda and vendetta against Range Resources.  The voters of Robinson Township have said “enough already – let’s get serious.”  The voters of Cecil Township, in my opinion, fell for the contrived controversy and the baseless accusations, but it is their right to do.  The people have spoken.  Thank goodness at least one of the two townships has finally spoken up to reject this angry, divisive and self-serving sort of politics, the type that so often prevails in the anti-development world.  We’re still waiting on Cecil Township to stop with the Jesse White politics, but the Robinson Township results suggest this, too, shall pass.