The data from a recent post at Today In Energy has been picked up by numerous media outlets and distorted the energy debate as to the role of renewables.

I love Today In Energy, the daily blog of the Energy Information Administration. It’s always fact-driven, unbiased and accompanied by great graphics. I check it every day, in fact, and am seldom disappointed with what I find. A recent post entitled “New electric generating capacity in 2019 will come from renewables and natural gas,” is no exception. It lays out the facts in the same crisp fashion as usual. But, there is a problem, nonetheless. It is that too many are referring to it as evidence renewables are now somehow taking over. It isn’t true.

Here’s the essence of the article along with one of the charts offered:

According to EIA’s latest inventory of electric generators, 23.7 gigawatts (GW) of new capacity additions and 8.3 GW of capacity retirements are expected for the U.S. electric power sector in 2019. The utility-scale capacity additions consist primarily of wind (46%), natural gas (34%), and solar photovoltaics (18%), with the remaining 2% consisting primarily of other renewables and battery storage capacity. 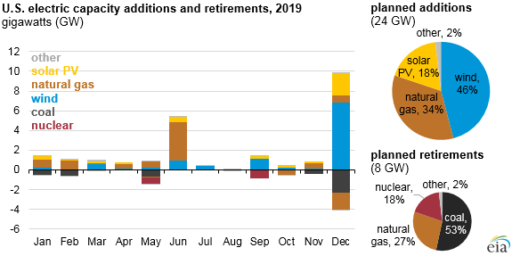 The data shows 23.7 gigawatts of new electric generating capacity is expected to go on line in 2019; some 22.7 GW of which is expected to come from wind, natural gas and solar, with wind taking the lead at almost half of the total. That’s also less than half the story, though.

Why? Because it’s not the capacity that matters in the energy debate, but the actual generation. The figures EIA is reporting are merely nameplate capacities; what the equipment is theoretically capable of producing, not what it really generates. Wind energy facilities, for example, typically operate at about 35% capacity because the wind doesn’t blow with regularity. This means the 10.9 GW of wind capacity is really 3.8 GW. Likewise, the 4.3 GW of utility scale solar is, at a 25% capacity factor, really worth only 1.1 GW.

The 6.1 GW of combined cycle natural gas generation, however, at the 73% capacity factor achieved in July of this year) is worth 4.5 GW, plus there is another 1.4 GW of natural gas combustion turbine power that can be expected to generate 0.3 GW or so (these plants primarily being older plants only used during peak demand periods. Add these together and renewables and natural gas are roughly even in terms of the actual new generation that can be expected.

This brings us to another important point. The capacity factor data reflects generation that, in the case of wind and solar, is limited by physical circumstances; that is to say whether the wind is blowing or the sun is shining. Wind does best in April and solar does best in June for these reasons. They cannot, therefore, substantially improve the capacity factors.

The opposite is the case with natural gas, though. It could achieve a 73% capacity factor and perhaps even higher every month of the year but for the fact solar and wind are being forced into the system. When they’re generating more than the average, natural gas, as the dispatchable energy source that can be turned up and down at will, is turned down to accommodate the renewables.

Therefore, to the extent renewables are being substituted for gas, the latter’s capacity factor is arbitrarily reduced, imposing efficiency costs on the overall system while also adding costs for subsidies of the renewables at the other end. Putting too many renewables into the system is strictly a lose-lose situation economically.

Those subsidies at the front end are also the reason renewables are being forced into the system, slowly but steadily weakening the economic efficiencies of electricity generation, just as has happened in Germany where the prices are now completely onerous. Here’s the explanation from a decidedly anti-gas website (emphasis added):

A recent report from the Rhodium Group shows that actual installations in 2018 track with the EIA’s 2018 estimate: between January and October 2018, 14.9GW of natural gas capacity were added to the US grid, while only 7.9GW of solar and wind capacity were added…

2019 will look quite different, according to the EIA. Wind power alone, at 10.9GW, is currently scheduled to come online before the end of the year, likely spurred by the phase-out of an Investment Tax Credit (ITC) on newly built large wind projects that expires at the end of 2019. (Small wind projects, with turbines smaller than 100kW, can still take advantage of the ITC for some years to come.)

This summarizes everything, doesn’t it? Inefficient wind capacity that is neither necessary nor economical is being added to the system at taxpayer expense so as to compete with unsubsidized dispatchable gas that is absolutely necessary for baseload generation and lower its efficiency as well. I wish I could say “only in America” but, sadly, this a problem throughout the Western world; a problem created by corporatists milking governments everywhere. A wise policy would end all energy subsidies to every sector and let the market decide what works. There is role for every energy source and, especially clean inexpensive gas, but what we need is a lot less government planning and toying with the system.