Who’s the real “David?” Inge Grafe-Kieklak wrote about this five years in a prescient essay that relates directly to what’s happened in New York since.

I am a member of the Joint Landowners Coalition of New York; I want to sound an alarm. Sixty-five years ago, America defeated a European dictatorship that used the same techniques now employed by so-called environmentalists on the issue of drilling in the Marcellus Shale; propaganda films, fear, lies and half-truths.

Fear is very strong emotion and as soon as you fall under its spell, reasoning is impaired. It sells papers, TV and radio, while often deadening the other senses to sound judgment.

Facts, on the other hand, are a boring commodity; they do not sell very well. What do film producers and actors do? They entertain and sometimes scare you. What do they know about hydro-fracturing, geology and engineering? This is free publicity for them. 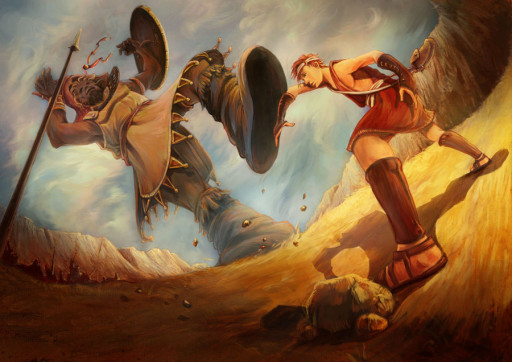 Start looking very critically at our leaders. Do not simply take them at their word. Look at the issues from all sides and think for yourselves; then make up your minds.

Also, look where the money comes from for the environmentalist opposition. Let us look at what those who oppose drilling have so far accomplished. They have divided communities, pitted neighbor against neighbor and divided families and friends all because of their agenda, which anti-change and/or “not in my backyard.”

They are not for the farmers or the environment, but only selfishly against change. But change is the only constant in life. The opposition is not about facts, but only selfishly and politically motivated. You hear all the time about “David and Goliath.” I know for a fact we are the real grassroots movement and as such, we are the “David,” but not as loud as the opposition and we offer only those boring facts, which take time to “get their shoes on.”

Get out of this dark and dreary cave and see the light. Start thinking for yourselves and stop following the environmental gurus.

Editor’s Note: Considering everything that’s happened since Inge wrote this five years ago, her words have proven remarkably prophetic, as New York’s governor used a pile of junk science peer-reviewed by other quacks as cover for a political decision designed to appease still other quacks. Worse, it was implemented by a pair of political hacks, under the undue influence of some of the wealthiest of the 1%, some greedy trial lawyers and other special interests with the customary indifference of all to the plight of the Southern Tier, while two of three top state officials have now been arrested for corruption. Inge is looking pretty sharp in retrospect.

10 thoughts on “Who’s the Real David in the Fracking Wars?”