Thursday, the Pennsylvania Public Utility Commission (PUC), the agency charged with keeping tabs on impact fee revenue from shale drillers (Pennsylvania’s version of a severance tax), released the final numbers for impact fee revenues and disbursements in 2016 (see PA PUC Impact Fee Report: Revenue Down Again in 2016). Revenues were from the impact fee were down for the third straight year.

And, since politicians in Harrisburg are in the midst of budget negotiations and attempting to close a perennial gap in the budget, we have no doubt the hew and cry will go out, yet again, to enact a severance tax on shale gas and oil–either in addition to or on top of the impact fee. They ought to look at West Virginia.

We’ve written about PA Gov. Wolf’s (and his fellow Democrats’) manifestly dumb idea of implementing a severance tax (see our numerous stories on the topic here). The new argument that will be used in Harrisburg is this: If we only had a severance tax, we wouldn’t experience as much of a decrease in revenue as we have with an impact fee. 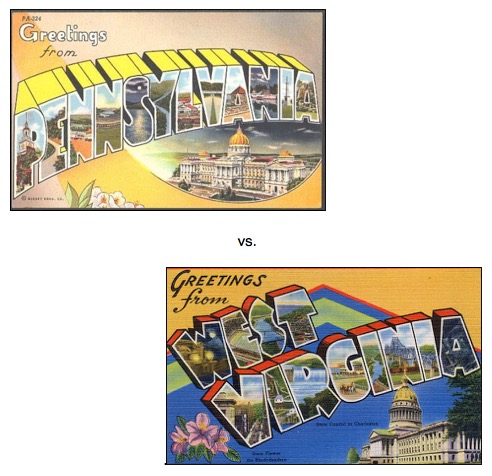 This post aims to debunk that claim. In fact, an impact is far superior to a severance tax (the tax “everyone has but us here in Pennsylvania”). Why so? Because, as the numbers below show, PA’s decrease in revenue from an impact fee has been far less than the drop in severance taxes in other states, like West Virginia.


In Pennsylvania, the impact fee, which is calculated on new shale wells drilled (over a period of years, sliding scale), has raised this much money in fees (i.e. taxes) over the past three years:

In West Virginia, where they have a severance tax based on the amount of gas coming out of the ground, rather than on new wells drilled, the tax raised this much over the past three years: 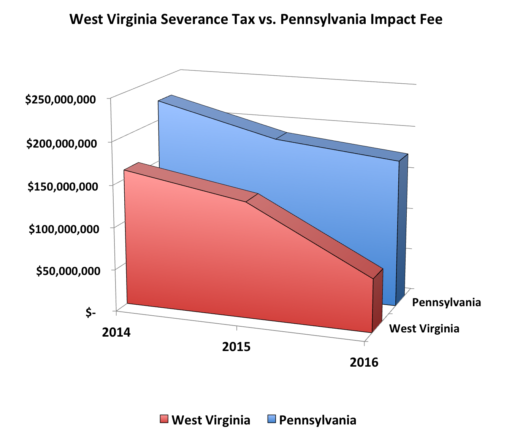 Both types of revenue generators will go down in the hard times, when the price of natural gas bottoms out. However, a severance tax is much more volatile than an impact fee. Drillers will keep drilling some new wells even in the down years in order to hold acreage in danger of slipping away due to leases expiring.

And, as soon as the drill bit hits the ground and starts chewing, that well gets taxed in Pennsylvania – even if no gas comes out of it. But, with existing wells flowing gas, like those in West Virgia, it’s easy to just turn the spigot off and wait for prices to go up again. No gas flowing, no severance tax revenue.

Our point: An impact fee is better than a severance tax. Pennsylvania has the kind of “tax” it should have, and if the Commowealth passes a severance tax bill, it will kill the goose laying the golden eggs that many local municipalities have come to rely on for revenue.