Recent West Virginia Floods have received scant media attention but oil and gas companies have been there to help and you can make a difference, too.

Several West Virginia counties were devastated by floods caused by heavy thunderstorms at the end of last month. Authorities have stated 23 people lost their lives. They warn this number may rise in the coming weeks. Thousands are left homeless after the complete devastation of homes and businesses. We all need to pitch in to help. 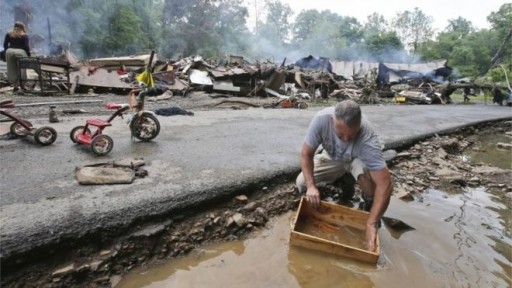 Many businesses and individuals have offered assistance. Oil and natural gas companies have pledged more than $350,000 to the American Red Cross (ARC) to help. Cabot has joined these companies by donating $25,000 to the ARC of West Virginia. Our company is also hosting donation drives at all of its West Virginia offices and in the Pittsburgh office.

The need for volunteers, equipment, supplies and funding will be great over the next few weeks as the relief efforts proceed to help the thousands displaced by the flooding.

According to the ARC West Virginia Region: “More than 700 American Red Cross workers have provided over 1,500 overnight stays in shelters, facilitated the delivery of more than 65,000 meals and snacks and distributed more than 6,000 cleanup kits to those impacted by last week’s devastating flooding.”

If you would like to make a personal donation toward these efforts, you can do so here by selecting “Use my donation to support West Virginia floods.” You can also text the word WVFLOODS to 90999 to make a $10 donation.

Additionally, if you are close to or live in West Virginia, check out the ARC West Virginia Facebook page. It continually posts information about where donations can be dropped off, ways to help and locations of the Red Cross Service Centers for those impacted by the flooding.

Our thoughts and prayers go out to all affected by these West Virginia floods.

Editor’s Note: Two thoughts come to mind in reading George’s post. First is this; every time there is a natural disaster in oil and gas regions, the industry is always among the first to lend a hand. It was that way in Northern Tier of Pennsylvania a few years back, for instance. This was even as then former DCNR Secretary John Quigley was e-mailing around to find fracking horror stories. There were none, of course. Later he was unexplainably confirmed as DEP Secretar,y only to flame in yet another e-mail episode.

The second thought is how strange it is that these floods in West Virginia have gotten so little media coverage. Dozens died, after all. I’ve done consulting work in the affected counties. I know what good people live there. They’re just rednecks to the sorts of people who write the headlines, though. They’re much like the people of Upstate New York are to Andrew Cuomo. They’re like the people of the Upper Delaware region are to the spoiled brats running the William Penn Foundation and the dirty tricks outfits they fund. The people impacted by these floods just like under the DRBC and New York fracking moratoriums are of no consequence to the ruling gentry class. That’s the real battle we fight every day. The West Virginia people are our brothers and sisters in that regard. So, let’s help them!

1 thought on “The West Virginia Floods; A Disaster Needing Our Attention”