Water Defense, Mark Ruffalo’s fractivist initiative, has gone mostly dark. It appears to be out of business and, rather suddenly, too. What happened?

Remember “Water Defense,” Mark Ruffalo’s big fractivist initiative? Remember the water deliveries it financed with Ruffalo out front as the celebrity face of the stunt? Remember, the “water bug” that was going to provide a great new tool for stream testing?  Well, good luck finding any of it now. The Water Defense Facebook page hasn’t been updated July 31, 2018. The Water Defense web page is gone. What happened?

Mark Ruffalo is the classic superficial celebrity seeking validation for his self-perceived undeserved wealth by adopting some politically correct cause. He was latched onto by the NRDC gang and used as a front for their special interest agendas. Attorney Jay Halfon, the Fractivist Rasputin, was recruited to create a phony charity named Water Defense, Inc., which provided a nice excuse for Ruffalo to serve as the point of the spear in a war against fracking anywhere near the Rockefeller land holdings in the Catskills as that would make it more difficult to acquire more land on the cheap.

While Mark Ruffalo was the face of Water Defense, Inc., the Executive Director was trust-funder Ramsay Adams. Ramsay, previously chosen by John Adams, his father and the founder of the NRDC, to be the Catskill Mountainkeeper, had put Ruffalo on his board, along various NRDC folks. The Chief Technology Officer and Investigator was a fellow named Scott Smith, who, it appears, developed the “water bug,” a gimmicky thing that ended up generating the publicity Ruffalo sought, but not the reputation. Here’s some of what I wrote about it three years ago:

The story, which just appeared in Slate but builds on other work in the Huffington Post and elsewhere, speaks for itself in most respects. Titled “Mark Ruffalo Is Helping a Fake Scientist Use Flint to Promote His Sponge Business,” it details a sordid attempt by Ruffalo’s “Water Defense” outfit and its Chief Technology Officer & Investigator, Scott Smith, to take advantage of the Flint, Michigan water crisis by marketing  something called a “Waterbug” and another product called “Aquaflex” that can supposedly turn the water potable…

More details are offered in a story (also linked above) entitled “In Flint Water Disaster Response, Ruffalo is a Bad Actor.” Nothing is held back about the nefarious role of the guy we’ve often referred to as “The Little Green Bully” for the fractivist hype that is such a big part of his celebrity marketing campaign. But, let’s be honest, Mark Ruffalo isn’t the real con man here. He’s just another useful idiot celebrity, like Leonard Dicaprio, latched onto by the NRDC gang to promote their special interests. They know putting shallow celebrity types out front feeds starved-for-attention celebrity egos and lets them do a bit of virtue signaling, while also advancing the personal interests of the gang under the cover of self-righteousness.

Fully appreciating this requires an understanding of what exactly “Water Defense” is. It was created as a not-for-profit corporation at the time the EPA was investigating Dimock and set itself up as an advocate group around the issue, later even delivering water to homes there, all as if it was Mark Ruffalo’s initiative, except that it wasn’t and still isn’t. He’s just the front man, duped by the NRDC gang. The application Water Defense, Inc. made for Federal tax exemption in 2014 (some two years after it claimed it was tax-exempt) tells the story. It identifies, on pages 28-29, four key people who serve as directors and officers. They include Mark Ruffalo, his accountant, his attorney and Ramsay Adams.

Ramsay Adams, of course, is the son of NRDC founder, John Adams, who’s tight with Larry Rockefeller and lives in the Beaverkill community the family created as a Catskill enclave for themselves and their friends. John also created the Open Space Institute (now headed by Rockefeller descendant Kim Ellian) and served as Joe Martens’ boss before, during and after his stint as DEC Commissioner. Finally, he set up his son Ramsay up with a make-believe job as Catskill Mountainkeeper, where he and Ramsay’s sister (Honeywell executive Katherine Adams) who also serves with Elliman on one of the other Rockefeller boards, could keep an eye on him…

More to the point, the application to the IRS for tax-exemption was signed by Jay Halfon, the Fractivist Rasputin, who serves on the Park Foundation, 350.org and Earthworks boards, while also managing the Sustainable Markets Foundation for the Rockefellers and friends. He’s as tied into the NRDC gang as anyone could be, while operating mostly own the background. Halfon and the Foundation are, too, the conduit between these folks, the trial lawyer community and the radical PIRG enterprise – all designed to promote very special interests using an environmental/social justice theme. The [Park} Foundation also provided grants totaling  $161,250 to Water Defense, Inc. at the front end, which accounted for 98% of the organization’s revenue in 2012 (all but $3,875).

Yes, Water Defense, Inc. is another NRDC gang scam, with Mark Ruffalo putting himself out front as the face of the thing for public consumption. Once the EPA declared the Dimock water safe, Water Defense, Inc., essentially closed up shop, taking in no new revenue in 2013, and apparently shifted the focus to another different sort of scam. Someone brought in Scott Smith as “Chief Scientist” (his degree is apparently in business). Here’s a video of Smith doing some his proselytizing:

Who brought in Smith? Was it Ruffalo? Or, Ramsay Adams? That requires more investigation but enough is clear at this point to know one thing at least; Mark Ruffalo was used by Ramsay and/or Smith and he ought to shut up and go back to acting. No one’s taking him seriously at this point, especially the people of Flint, Michigan. He’s simply one more example of how special interests are using the fracking debate to advance their own personal agendas to the detriment of those for whom they deign to speak and the Upstate and Upper Delaware landowners they have deprived of any opportunity for economic development.

Following my post and all the terrible publicity Ruffalo got for his Flint fiasco, Water Defense seems to have permanently shut down but not until it raised more money. Indeed, its 2017 filing with the IRS shows it received over $406,000 that year, having bounced back from its 2013 nadir before going dark with its website. It received $50,000 from the Park Foundation in the interim, but where did the rest of the $1,151,340 it took in from 2014 through 2017 come from?

It’s a mystery. A basic search of foundation grants shows the Sustainable Market Foundation, created by the Rockefellers and run by Jay Halfon, gave considerable money prior to 2014, but none after. So, did Ramsay Adams and Scott Smith convince Mark Ruffalo to dump money into the water bug? If so, I’m starting to feel sorry for the guy. He’s been used in more ways than one. 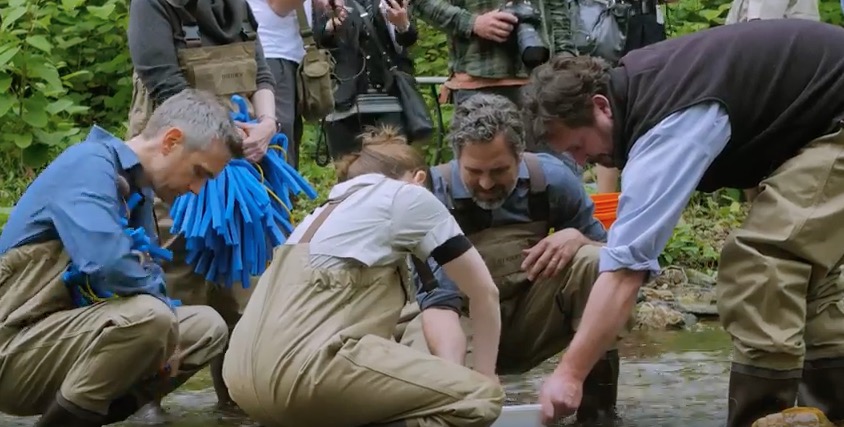 Anyway, it’s apparently done, a washed up green hulk if you will. Was it the water bug and the attendant bad publicity from the Flint episode? Or, was it the fact the Catskill Mountainkeeper, with which Water Defense was inextricably linked, was caught financing paid shills such as Craig Stevens with money from Food & Water Watch? Cabot spokesperson George Stark said this, after all (emphasis added):

“This is not Cabot vs. three landowners. This is Cabot vs. the money that’s behind this. These are paid activists, paid actors on behalf of Food & Water Watch and the like,” Cabot spokesman George Stark said outside court Monday. “Some will say that, you know, again Cabot is going after a local voice. And that’s nothing further from the truth. We are actively going after those that are funding. These billionaire groups are funding these mouthpieces.“

Hmm…you be the judge. Was it the water bug or was it being caught doing the dirty work of billionaire groups funding fractivist mouthpieces?