A Washington Examiner op-ed column by Kevin Mooney points out the political corruption with the DRBC’s proposed fracking ban and says “the jig is about up.”

Kevin Mooney has been following the DRBC for some time. He just published an op-ed in the Washington Examiner, in fact, partially based on a recent interview with me. As usual, Kevin quickly gets right to the heart of things. He articulates the points many of us have been making for a long time. We’ve been saying the DRBC is a corrupt agency in political debt to the same William Penn Foundation that funds the Delaware PovertyKeeper and we have the emails and records to prove it. 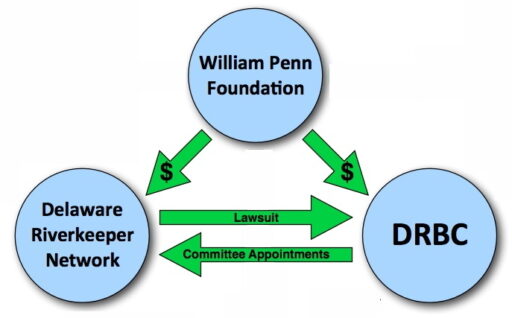 Read Kevin’s story—all of it—because it explains in the simplest of terms what the DRBC is up to and why is must come to an end. Here is an excerpt quoting yours truly:

Open records requests to the DRBC show that it is closely tied in with the Delaware Riverkeeper, a nonprofit based in Bristol, Pennsylvania. Shepstone, who is familiar with the FOIA results, informed lawmakers in Harrisburg during recent testimony that the commission “has stacked almost all its committees with representatives of the Delaware Riverkeeper, a special interest anti-gas advocacy group that sued it over gas drilling issues.”

FOIA results also show that the DRBC has received funding from the William Penn Foundation, based in Philadelphia, which has also provided funding to the Delaware Riverkeeper. What are the implications of these political and financial relationships? Shepstone doesn’t hold back.

Here’s what he said in an interview:

The DRBC and the Riverkeeper are allies, both having been funded by the William Penn Foundation to address natural gas issues. The fact the DRBC saw no conflict of interest in taking money from a foundation that also financed the Riverkeeper, which was suing the agency at the same time over gas issues, tells anyone with half a brain the William Penn Foundation was orchestrating everything. The foundation funded DRBC studies of gas drilling impacts were a sham effort to delay forever having to take a vote, killing fracking without taking responsibility as the Riverkeeper provided the opposition to justify the studies.

The foundation’s website shows that it donated $530,000 to the DRBC in 2019 and about $1.4 million to the Delaware Riverkeeper in 2017. Based on the FOIA results, Shepstone also finds that the environmental group “continues to coordinate activity behind the scenes” under the DRBC’s current leadership.

Read the whole thing here. Thank you, Kevin, for highlighting this corruption at the DRBC!