Washington County has an economy that can only be described as a Phoenix and it all results from natural gas development driving multiple economic sectors.

The evidence of what natural gas development does for an economy continues to mount.  There’s no better place to see it graphically than Washington County, Pennsylvania where the Commonwealth’s shale gas success began.  Washington County is the southwestern corner of the Keystone State, near Pittsburgh, on the Ohio County border.  It has a history of coal mining and natural gas development, but the mining industry was on the wane before shale gas arrived roughly a decade ago.

Range Resources drilled a Marcellus Shale well in Washington County in 2003. The results encouraged the company to explore further using a combination of horizontal drilling and hydraulic fracturing methods similar to those employed in the Barnett Shale (Texas). Their first Marcellus Shale gas production from the well began in 2005, according to the Pennsylvania Department of Conservation and Natural Resources. What’s happened since then is a Phoenix-like economic rebirth that’s nothing less than startling when you look at the numbers.

What first got my attention was this simple little chart on the Bureau of Economic Analysis website: 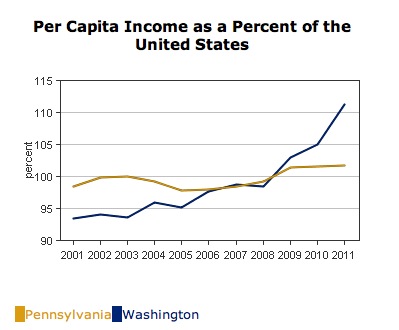 When I saw this chart, I was astounded.  The county is exurban in nature with a population density of 242 persons per square mile (about 1/8th of Allegheny County where Pittsburgh is located) and such areas just don’t experience this kind of revival this quickly, particularly in a region sometimes described as a “rust belt.”  The county still has fewer people than it had in 1960 and its 1999 Economic Development Strategy made these observations about its economy:

Mining displays a negative trend. Manufacturing, construction, and wholesale all display no trend.

Needless to say, this Economic Development Strategy did not and could not anticipate what was to happen a half-decade later with natural gas, which says something about the futility and vanity of government directed economies but let’s hold that thought.  The key point is this: it took three years of natural gas development for Washington County’s economy to regularly deliver per capita incomes on par with the US and it rocketed up from there during what is known as the “Great Recession.” It is a simply remarkable development.

The evidence of natural gas being the cause of this wonderful revival is overwhelming. US County Business Patterns data shows the following increases in payroll from 2005 to 2011: 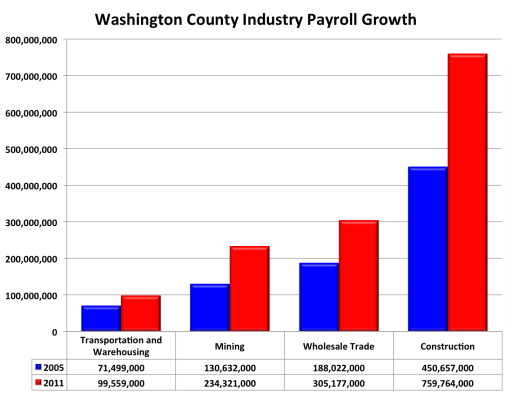 These are all industries directly and greatly impacted by natural gas development and they have experienced growth in payrolls of 39% to 79% over the six years. Collectively, they account for $1.4 billion of payroll and $558 million or 53% of all payroll gains in all industries.  Oil and gas accounted for a minimum of $118.4 million of mining payroll in 2011 as compared to numbers so low in 2005 they couldn’t be disclosed without revealing the individual companies involved, so we know precisely what is driving that number and everything else related to it – natural gas development. It is the liftoff pad for the Phoenix that is Washington County.

Remarkable, just remarkable, and nothing at all like what was planned and projected in 1999 – thank goodness!