Virginia Organizing is another phony political outfit masquerading as a charity with no regard for the law while making itself a fractivist tool for others.

Kevin Mooney, over at The Daily Signal, has a new piece up about an outfit I’ve known about for a while called Virginia Organizing. It first came to my attention a few years ago when I was exploring who was donating money to the NRDC. Virginia Organizing came up repeatedly not as a donor, but as a recipient, of fractivist money from the same people funding NRDC. They included the Schmidt Family/Google Foundations, the Park Foundation, Tides Foundation, the William & Flora Hewlett Foundation, the Marsla Foundation and the Wallace Genetic Foundation, all of which have been previously exposed on these pages as major fractivist enablers.

Kevin, though, has uncovered an additional link of significance; the dark money Sea Change Foundation which appears to have funneled Russian money into fractivist coffers via the helpful hands of the solar invested Simons family. His article is well worth reading as it details the insights of a CIA veteran as to how Russian interests manipulate groups such as Virginia Organizing into doing their bidding through a merging of ideological and mercenary objectives on the giving and receiving ends. What’s also interesting to me, though, is how Virginia Organizing has done its dirty work and how it’s gotten away with ignoring the law.

I wrote about Virginia Organizing (logo above) back in 2015, in a post entitled “How About Some Environmental Justice for Us,” noting the following:

Virginia Organizing is remarkable because the supposedly humble grassroots group receives millions in donations from major foundations – primarily the Marisla Foundation, which gave nearly $1.3 million from 2010 to 2012 and Sea Change, which donated $600,000 in 2010 and 2011. They have also received hefty funding from the Tides Foundation, the Rockefeller Family Fund, the Park Foundation, as well as others. Additionally, they have established more than two dozen fiscal sponsorships, which they dub “partners” on their website and filings. One of their sponsored charities is Environmental Health News (EHN), which claims to be an independent, nonprofit news organization founded in 2002. Nowhere on its website is the relationship with Virginia Organizing advertised, and it is only disclosed on the donation page, where they instruct potential donors to make checks payable to Virginia Organizing.

This is the echo chamber from which the fractivist yelps emerged on the pages of Scientific American. It’s the usual suspects. There’s never anyone else.

A quick check of who funds Virginia Organizing today adds the Heinz Endowments to the list of funders. Heinz, of course, funds PennFuture, the Clean Air Council, the Mountain Watershed Association, StateImpactPA, the extremely phony Southwestern Pennsylvania Environmental Health Program and any number of other fractivist initiatives. It is heavily influenced by Teresa Heinz Kerry who is also behind the money-laundering Tides Foundation. Here’s the Heinz funding of Virginia Organizing: 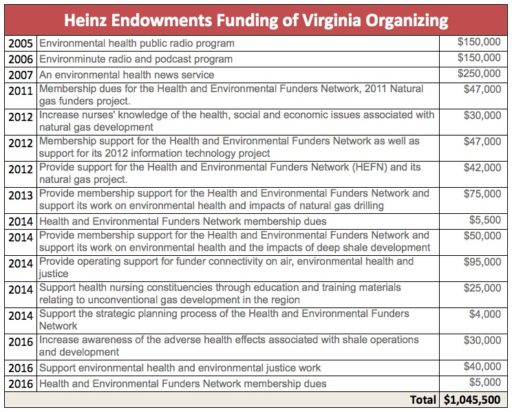 This is just one funder. The group also, for example, received two grants from the infamous Park Foundation. One of $30,000 was for the “Science Communications Network’s project on health effects associated with unconventional oil and gas” and the other was for $25,000 to fund the same “Health and Environmental Funders Network” the Heinz Endowments funds. Virginia Organizing is clearly on the take to fight fracking on behalf of America’s elitist trust-funders.

It’s also a highly political organization as a quick perusal of its website will indicate. It describes itself as non-partisan, which is the first thing partisan political outfits faking it as 501(c)3 charities always do, of course. By non-partisan they means they doesn’t overtly campaign for one party or another, but only a fool could review its activities and not see it is highly partisan and just as political. Indeed, their 2016 Annual Report includes the following among a “by the numbers” list of accomplishments:

The answers are obvious. Virginia Organizing is mostly about politics, most of the time. They would be entitled to be, of course, if they were a 501(c)4 organization, but that would require giving up tax-exemption for donations received. Unsurprisingly, they don’t want to do so. Therefore, they pretend none of this is lobbying. Nonetheless, it clearly qualifies as grass-roots lobbying under the IRS rules that strictly limit how much such lobbying a 501(c)3 group can do:

Yet, the Virginia Organizing 990 return for 2015 indicates they did a mere $40,444 or 0.9% of its budget, on lobbying of any kind, which takes us to the top on the ludicrous scale. Curiously, the return also fails to list Executive Director Joe Szakos on their Part VII list of officers or disclose his compensation as clearly required. Is he paid by someone else or what? Also, while they leave Schedule B in the return disclosing some of their major contributors, it seems to be a very incomplete list.

So, here’s a suggestion for those legislators such as Rep. Lamar Smith who are investigating political activities of fractivist groups; haul these folks into a committee hearing and start asking questions about these matters. While they’re at it they can also subpoena the Simons family members about what the heck is going on with the Sea Change Foundation. Put them all under oath and fire away. Virginia Organizing is just the beginning of what is a complete corruption of the tax-exemption and lobbying rules applicable to 501(c)3 “charities.” Let a real investigation begin.