Vera Scroggins, like so many fractivists, imagines she’s above the law and can act with impunity toward others, but Cabot Oil & Gas is taking her to task.

Vera Scroggins loves the limelight and lives for it, imagining herself as some sort of heroine for defying the rights of others. Her foul-mouthed antics belie the granny activist schtick she markets to the media and she wears her deliberate defiance of authority as a badge of honor among the gallery of rogues with whom she associates. She “plays the martyr” well to a point but, unlike a lot of industry folks who prefer attempting to wish her away, Cabot Oil & Gas has been directly challenging her and showing the world who she really is.

The last time Cabot took Vera to court she exposed herself at court as a very conniving sarcastic individual, which is never a smart thing to do with judges, and she got a $1,000 trespass fine as a result, along with a stern judicial lecture. Now, she’s defied the court itself and Cabot is asking for a bigger penalty. Good! 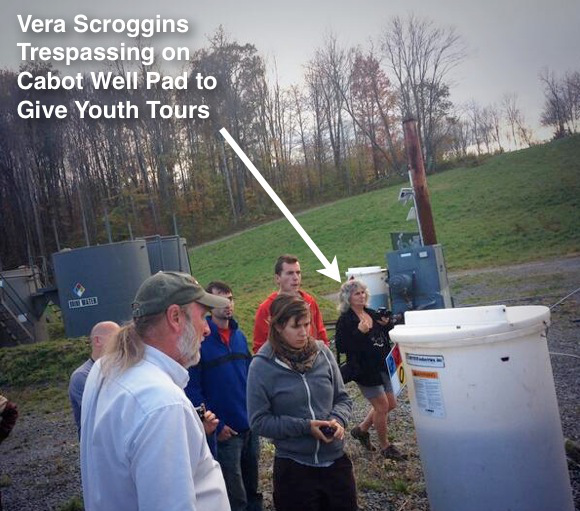 Yes, Vera Scroggins is at it again, in what appears too be an astounding display of arrogance and foolhardiness, combined with alleged contempt of court. Cabot Oil & Gas has filed a Motion for Civil Contempt with the Susquehanna County Court of Common Pleas. The last two paragraphs of the motion summarize:

37. In light of the extensive history of this case, which includes prior findings of contempt and the imposition of a $1,000 fine, Ms. Scroggins’ defiance of this Court’s May 1, 2015 Order demonstrates that Ms. Scroggins believes she is above the law and is not required to obey the commands of this Court.

38. Cabot respectfully requests that this Court enter an Order of Civil Contempt against Ms. Scroggins requiring her to pay a fine in the amount of $5,000, as well as Cabot’s costs and attorney fees incurred in enforcing this Court’s Order, and other relief that this Court deems appropriate.

The motion is only nine pages in length and well worth reading for those who followed Vera’s antics over the years. Appended are another 113 pages of exhibits demonstrating just how explicit the previous court instructions to Vera were and how blatantly she has ignored them in her “above the law” pursuit of others’ attention to herself. The paragraphs detailing her most recent adventure make for some interesting reading:

13. On November 28, 2017, Cabot was conducting hydraulic fracturing operations on its Foltz # 2 well location, off Zicks Hill Road, in Susquehanna County.

14. In connection with the hydraulic fracturing process, as a safety measure, Cabot hired GasSearch Drilling Services Corporation (“GDS”) to provide assistance with the coordination of water truck traffic in and around the area of the Foltz# 2 well location.

16. The GDS employee received reports that individuals in the red car were impeding traffic and that they appeared to be videotaping or taking photos of the water trucks.

24. Ms. Scroggins then made another extremely dangerous U-turn on Zicks Hill Road at the entrance to Cabot’s access road, and proceeded back up the access road toward the Foltz# 2 well location.

25. The GDS employee then followed Ms. Scroggins up the Foltz# 2 access road.

26. Seeing the truck behind her, Ms. Scroggins pulled to the side on the access road and waved the GDS employee to pass her.

27. Instead, the GDS employee pulled up next to Ms. Scroggins and asked her what her name was. She refused to provide it.

28. Although she refused to provide her name, the GDS employee recognized Ms. Scroggins and knew her identity.

29. While alongside the car Ms. Scroggins was driving, the GDS employee observed a female passenger videotaping. Upon information and belief, the female passenger was Jan Louise Lemas, a former real estate agent, who uses the fictitious name “Hope Forpeace” for social media purposes.

30. Ms. Lemas is aware of and has knowledge of the restrictions and orders against Ms. Scroggins for trespassing on Cabot leased property and interfering with Cabot’s operations.

31. The GDS employee pulled back behind the car Ms. Scroggins was driving to call the Pennsylvania State Police.

32. Ms. Scroggins then did another U-turn in the middle of the access road and proceeded back toward Zicks Hill Road. 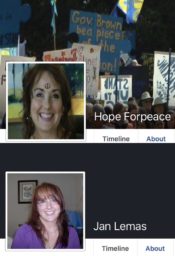 Readers of this blog know Vera Scroggins and “Hope Forpeace” have been permitted to comment frequently on posts. I find their comments useful in bringing out what fractivists are really all about and dispensing with their arguments. It’s also nice to know we’re occupying their minds and taking up their time. I will continue to allow them to comment for that reason.

Commenting under fake names, though, is not ok. “Hope Forpeace” assured me long ago that was her real name, and despite serious doubts, I simply took her word, supposing she must have legally changed it. It turns out that was apparently not true.

My own research now suggests she is, in fact, exactly who Cabot’s attorney says she is; Jan Louise Lemas of Santa Cruz, California and environs. She filed as Jan Lemas, in fact, to register her AK Productions video enterprise as a fictitious name; the same enterprise she claimed to serve as “Producer” under the name “Hope Forpeace” in this testimony before the EPA Hydraulic Fracturing Research Advisory Panel.

Such is the world of fractivism—fiction piled upon more fiction. Enough of that. Jan, if you’re reading this, you’re welcome to continue to comment here, but only if you drop the fiction and use your real name. 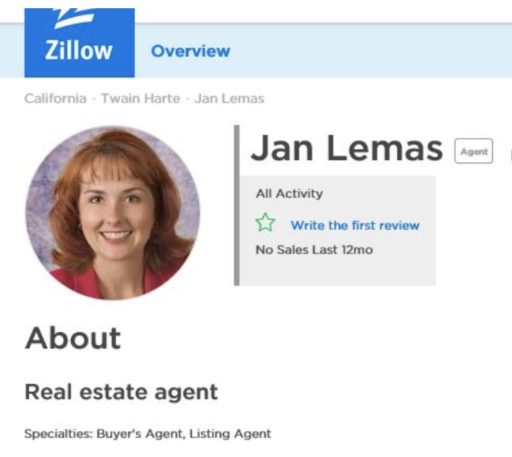 But, what it is with these people? How is it that a Californian with no apparent income is able to travel all over the country under a fictitious name to lend a hand to the likes of junkyard plaintiff (now defendant) Ray Kemble (who thinks shooting up water bottles and mouthing off rapid-fire obscenities is good PR) and career malcontent Vera Scroggins? And, what is the point of Vera deliberately violating an explicit court order, as its appears is the case here, rather than engaging in any of a hundred other ways to get your opinion out?

The answer is obvious, of course. A quick look at the work of Jan’s AK Productions, reveals how totally incapable they are at making a point. The best they can do is third-grade stuff and, so, they depend upon attracting the attention of others to make the case for them.

It’s about creating a scene and drawing attention so as to manipulate a corrupt and lazy media in the pocket of special interests into writing stories about poor Vera and Ray, up against a bully gas company. It’s about creating an excuse for StateImpactPA, et al to write another granny activist or local character fighting the man story. The real bullies, though, are the Vera Scroggins, the Ray Kemble’s and, especially, the greedy trial lawyers and elitist special interests foundations (Heinz Endowments, William Penn Foundation, etc.) who pull the strings behind the curtain.

This next hearing on Vera should be great entertainment. Can’t wait to see the StateImpactPA folks there and see how they try to spin this one.

26 thoughts on “Vera Scroggins; Above the Law, Or Just In Contempt of It?”