Vera Scroggins was, once again, found in contempt of court in Susquehanna County, but the hearing demonstrated her contempt for everything and everyone.

Vera Scroggins is old news, of course, but as long as she continues to be the favorite fractivist tour guide of New York legislators and foreign reporters, we are obligated to cover her antics, which, on the tiresome scale, now rise to something on the order of CNN’s coverage of the Malaysian airplane disappearance. We’re well into “enough, already” territory.

Yet, there she was in Susquehanna County Court today for once again violating the injunction against her trespassing and demonstrating her utter contempt not only for the court, but also the community, the law, the truth and pretty much everything and everyone. It was a perfect demonstration of fractivism at work as she put on a show for the handful of supporters and media in the room, but the judge wasn’t buying.

Vera Scroggins was in court today regarding the injunction issued last year by the Susquehanna County Court. That injunction provided as follows (emphasis added):

It is further Ordered that Defendant Vera Scroggins is restrained, enjoined and prohibited from entering upon any access roads to well pads in operation or production, maintained, and/or reclaimed by Cabot Oil and Gas Corporation and/or GDS, upon the well pad(s) and within one hundred (100′) feet of such well pad(s). Defendant Vera Scroggins is not by virtue of this provision prohibited from traveling upon public roads but shall not stop or remain present upon the public highway and/or rights-of-way adjacent thereto within one hundred feet (100′) on each side of the entry to access roads owned, leased and/or maintained by Cabot Oil & Gas Corporation and/or GDS for access to its well pads in operation and/or production activities except for bona fide emergencies…Defendant Vera Scroggins is restrained, enjoined and prohibited from causing others to engage in activities prohibited by this order, as it relates to her.

The court had earlier found she violated the injunction and clarified its order to be sure there was no loophole or reason for her to not understand it. It also, at that time, gave her some benefit of the doubt by classifying the violation as minimal, but simultaneously making it explicitly clear she was never to do so again. That was like telling a child not to touch the hot stove. It took but a few months for Vera Scroggins, the publicity junkie, to need another fix and be back in court. She was there today to defend against Cabot Oil & Gas’s charges that she was back at it again. It didn’t go well for her.

Today’s hearing involved an incident on Carter Road, of all places, where Scroggins took two French filmmakers and a “media coordinator” by the name of Trevor Clark to see a Cabot well pad. There was direct testimony she had, in fact, not only stopped on a Cabot access herself, but also encouraged others to engage in activities prohibited by the injection. Some of that testimony came from her own friends.

The details, frankly, are rather boring, but suffice to say the judge didn’t buy the multiple excuses, the twisting of the language or the torturing parsing of words by Scroggins. Upon conclusion of the testimony he found she was in direct contempt of court of her own volition. He left the penalty, which could involve fines and/or prison time, for another day.

The real story, though, was not the finding of contempt of court, but Vera Scroggins’ behavior in court, perhaps best revealed in what she told State Impact reporter Marie Cusik following the hearing: 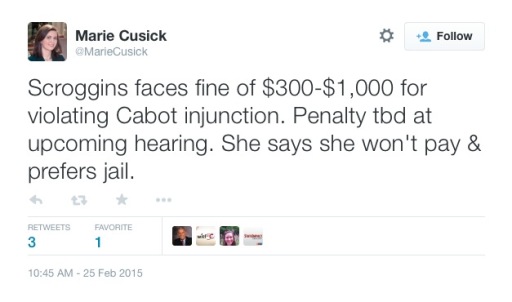 It’s all about Vera Scroggins when it comes to Vera Scroggins. She ardently desires some form of martyrdom to elevate her crusader image when she looks in the mirror. It wasn’t just contempt of court that was proved today, but also her contempt for everything and everyone other than Vera Scroggins. When she wasn’t spinning her story, she was playing to the half-dozen fractivist supporters in the audience (e.g., Bill Ferullo, Bill Huston, Alex Lotorto, et al, none of whom seem to have day jobs) by throwing in gratuitous references to “contamination” on cross-examination. A good witness can get in more points on cross than direct testimony, but not when you play games and that is exactly what Scroggins was doing. The judge seemed to notice.

She also tried playing cute by suggesting Cabot’s attorney slurred her words, encouraging the judge to take a tour and other tactics that impressed no one but herself and her cheerleader section. It wasn’t testimony – it was a performance by the sort of publicity freak who also thought a nude role in the Vomitorium would be good for attention. Vera Scroggins’ is all about attention and always has been. It’s also why she’s very old news at this point; irrelevant and simply boring.

32 thoughts on “Vera Scroggins: In Contempt of Everything and Everyone”