The US shale gas industry is, with new LNG export capacity, in position to dominate a new world order in energy with benefits for us and emerging nations.

There’s something new and beautiful happening as a result of the US shale gas industry. Our nation is now in position to dominate a new world order in energy with huge benefits to rural America and nations around the world who are emerging from poverty. It’s a story of exports, something we’ve not done so well at it in a very long time. It’s about shale gas produced in Pennsylvania, Ohio and Texas that is being converted to LNG and sold to Egypt, Mexico and Japan. It offers a demonstration of just how important energy infrastructure is to this country if we want to maximize the benefits of the shale revolution. 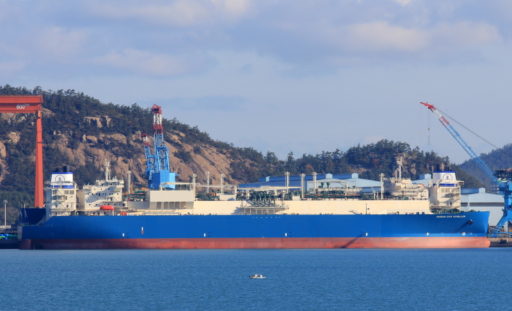 The story, which is all about a LNG ship (see above) and an energy market that turned around, is told in the Gulf Times (courtesy of Bloomberg). Here are some key excerpts (emphasis added):

The US stands to become the world’s third-largest exporter by 2020, when it’s expected to ship about 8.3bn cubic feet a day of capacity, or 14% of the world’s share, according to London-based consultant Energy Aspects Ltd. That growth is a testament to the power of the shale boom of the last decade, helping to reduce the country’s reliance on foreign energy sources…

Cheniere, which built the Sabine Pass terminal in Louisiana, was the first to ship shale gas abroad. The Houston-based company is now in the process of starting up its third plant and, alone, is expected to own 7% of the world’s export capacity in 2020, according to Energy Aspects…

Prior to the start of US exports last year, Asia and Europe were seen as the likeliest customers. Gas production in Europe is declining as demand grows and, in some cases, countries have expressed a desire to displace pipeline imports from Russia, seeking to diversify their supply at a time of unsettled geopolitics…

However, while analysts and traders watched whether Europe would emerge as a big buyer, Mexico, which already imports the most US gas by pipeline, quickly became the largest importer of shipped-in LNG from the US, followed by Chile. China, South Korea and Japan boosted buying during the winter.

Perhaps the most unexpected customers were in the Middle East, as Jordan, Egypt and the UAE in tankers. Dominion Resources is expected to join the fray as a US exporter by the end of this year, with its Cove Point terminal in Maryland bringing the nation’s export capability to about 3.2bn cubic feet a day, according to Energy Aspects data.
For natural gas, it’s “a new world order” that not only promises to establish the US as the swing provider, but also allows emerging countries to take advantage of low prices, said Ted Michael, an LNG analyst with Genscape.

Egypt, Jordan and Pakistan are already taking advantage of the change by using tankers docked at their shores that are basically floating factories, able to convert chilled fuel shipped into the country back into gas so it could be distributed on their pipelines. Outfitting ships with regasification plants are a third of the cost of building an onshore facility, and can be installed in a quarter of the time.

“The revolution has many moving parts,” Michael said. The broadening of outlets for exported gas could “easily” help boost US gas output by about a third to 100bn cubic feet a day in the next five years, he said.

It’s quite a revolution, indeed, and the exciting part is that economies are being revived at both ends; in rural Pennsylvania and Ohio, for example where gas shipped through Cove Point will be produced, and in places such as Egypt and Pakistan struggling to come into the modern day world where it is consumed. None of this can happen with the pipelines and LNG ports fractivists have so vigorously opposed. They are, as we’ve noted here many times before, povertykeepers. While styling themselves as protectors, they are destroyers. But, the new world order with respect to energy is here. A world needing our inexpensive clean energy will not be denied. It’s too important.